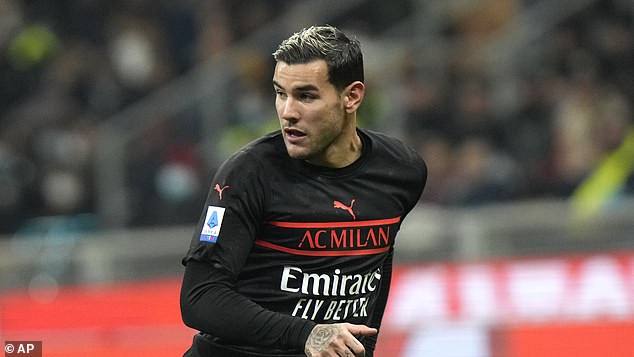 By Sam Blitz For Mailonline

AC Milan have intensified talks with left-back Theo Hernandez over a new contract at the San Siro until 2026 amid interest from Manchester City and PSG, according to reports.

Hernandez has been a key player in a Milan side that is currently flying high near the top of the table in Serie A, with the Rossoneri level on points with leaders Napoli in first.

The 24-year-old has also been in good form at international level with France, with his displays this season reportedly catching the eye of Europe’s elite, including Pep Guardiola’s City.

AC Milan have intensified contract talks with left-back Theo Hernandez, according to reports

But according to Italian news outlet Calcio Mercato, Milan chiefs Frederic Massara and Paolo Maldini have accelerated talks with Hernandez’s agent over a new five-year extension, with both parties optimistic about a new deal being agreed.

The 24-year-old has played eight times in Milan’s Scudetto title challenge so far, scoring once and registering three assists to his goal contribution tally this season.

The 24-year-old has been in good form this season, earning a France call-up in August

Hernandez has also broken into Didier Deschamps’ France team since the start of the campaign, with the left-back scoring a last-minute winner for Les Bleus in their dramatic Nations League semi-final comeback win over Belgium.

The defender moved to Milan in 2019 from Real Madrid in a deal worth £17m and is closing in on 100 appearances for the Rossoneri.

Hernandez signing a new contract would be a blow for Guardiola’s City, who have reportedly been looking for a new left-back for some time.

The Premier League champions were heavily linked with a move for former Sporting Lisbon full-back Nuno Mendes, who joined PSG on an initial loan move in the final days of the summer transfer window just gone.

City have Joao Cancelo and Oleksandr Zinchenko as left-back options but both players are not natural left-backs, with the former a left-sided midfielder and the Ukrainian a midfielder by trade.

Meanwhile, Benjamin Mendy is still in police custody ahead of his trial for rape and sexual assault due to take place in three months’ time. The left-back was denied bail earlier this month.