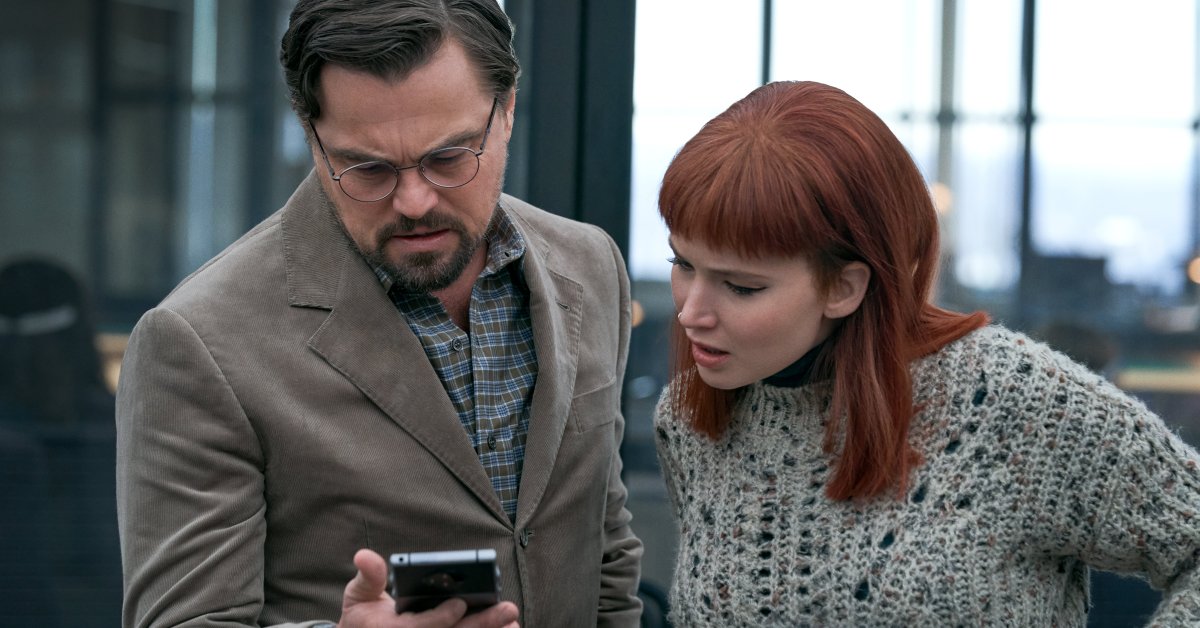 It’s only in the past five years or so that writer-director Adam McKay—the man behind unselfconsciously dumb, and terrific, comedies like Step Brothers and The Other Guys—decided that he’d rather be Aaron Sorkin. And whether you love or loathe Aaron Sorkin—or even just find his civics-class earnestness a little wearying—you can probably agree we need only one. McKay’s cautionary tale about the fragility of our Earth, Don’t Look Up, is occasionally a comedy; there are moments when the absurdity of it all earns a blunt laugh or two. But mostly, this picture about astronomers who discover a comet that’s hurtling toward Earth—and will most definitely destroy it—is so smug and superior that it inadvertently explains why so many on the right feel contempt for liberals. Instead of using the movie’s laborious more-than-two-hour runtime to allow his ideas to unfold, MacKay hits you with most of them in the first half hour. Being clonked with a meteor would be more subtle.
[time-brightcove not-tgx=”true”]

Jennifer Lawrence plays Kate Dibiasky, the pugnacious doctoral student with multiple nose rings and punky-fake red hair who first spots the comet; she and her mentor, rumpled smarty Dr. Randall Mindy (Leonardo DiCaprio), spring to action when, thanks to some quick chalkboard calculations, they learn that this destructo-comet is just six months away from striking Earth. Not knowing whom to call first, they’re passed along until they reach the Planetary Defense Coordination Office—a department that, the film tells us, exists in real life—headed by the suitably serious-minded Dr. Clayton Oglethorpe (played the always marvelous Rob Morgan, sorely underused here). So far, so good. But before long, they realize the dire nature of their message is totally lost on the buffoons of Washington, including high-level Pentagon official General Themes (Paul Guilfoyle), who charges the tired astronomers big bucks for snacks he got from the White House pantry for free, and a self-absorbed commander-in-chief who’s styled rather obviously as a lady version of Trump, President Janie Orlean (Meryl Streep, coiffed in lacquered mermaid spirals).

President Orlean has zero interest in science; the only thing she cares about is a potential controversy surrounding a Supreme Court nominee. That type of plot invention doesn’t even count as farce anymore—it’s mild compared with the jaw-droppingly audacious acts of our real-life former President, but never mind. McKay keeps piling on the sardonic observations, and the outlandishly ill-behaved characters, long after the movie has crumpled under their weight.

Sign up for More to the Story, TIME’s weekly entertainment newsletter, to get the context you need for the pop culture you love.

He doesn’t skimp on star power: Cate Blanchett plays a foxy, waxen talk-show host who turns the head of the normally mild-mannered Dr. Mindy—apparently, even he is capable of corruption, if only the sexual kind. (Melanie Lynskey plays his generous, put-upon wife.) Jonah Hill is President Orlean’s sarcastic, smarty-pants chief of staff. He also happens to be her son, which is somehow supposed to be hilarious. Mark Rylance shows up as the idiot-savant head of a global tech company who figures out how to monetize impending doom. And Ariana Grande plays a bubble-headed pop star whose breakup with a bigtime rapper (Kid Cudi) is a bigger event in the news cycle than a killer rock speeding toward Earth.

McKay shifted away from so-dumb-they’re-smart comedies with 2015’s The Big Short, which detailed how a group of investors made big money off the 2007 housing market crash. The Big Short was fleet and lively, as well as instructive; it didn’t necessarily augur a wrong turn for McKay. But Vice, from 2018, a cartoonified laundry list of the numerous sins of Dick Cheney, was one of the most depressing entries of that year’s holiday movie season. Instead of addressing the former Vice President’s nefarious deeds in any enlightening way, it reveled in its own weirdly naive pie-in-the-face obviousness. Vice looked like a movie made by a human who had spent the past 20 years on Mars, having only recently returned to Earth and finding it wanting. Don’t Look Up, with its suitably dismal “our planet is in trouble” message, might be a marginally better movie than Vice—but not by much. McKay’s ill-advised Sorkinization—his eagerness to prove himself a man of principles and not just chortles—continues apace. But even the eternally serious-minded Sorkin is funnier—and that’s saying a lot.