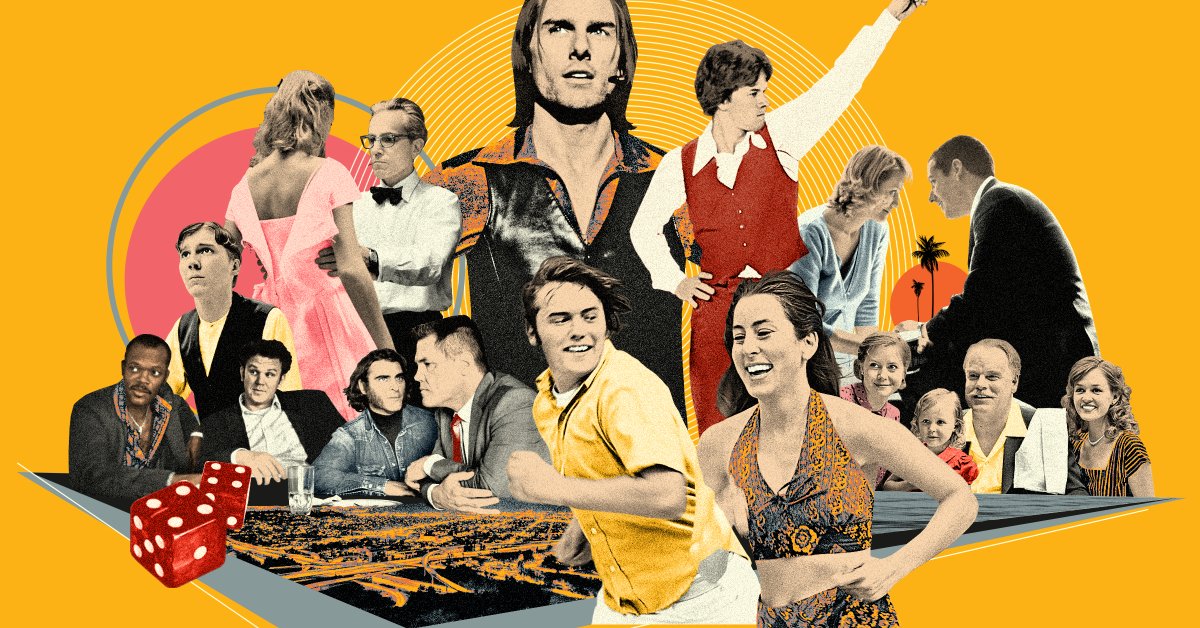 Your favorite Paul Thomas Anderson movie probably depends on whether you prefer his oddball comedies (Punch-Drunk Love, Inherent Vice, the new Licorice Pizza) or his operatic psychodramas (There Will Be Blood, The Master, Magnolia, Hard Eight). Sometimes, when you’re lucky, you get both at once (Phantom Thread, Boogie Nights).

Anderson tends to change tempos from film to film, which makes him one of the most energizing directors working today. Even when his films are sprawling, his work remains intimate and character-driven, using hyper-specific backdrops—often the California of yesteryear, where he was born—to illuminate a particular moment in time. In some sense, every story he tells is one in which humans’ desperate need for connection butts up against greed of one kind or another (usually a distinctly American kind).
[time-brightcove not-tgx=”true”]

But despite his headiness, Anderson is committed to entertaining the hell out of us. His soundtrack curation alone is exquisite—no surprise, as he is also a music enthusiast, having helmed slick videos for Fiona Apple, Radiohead and Haim. His plots are invigorating in their well-calculated unpredictability. Simply put, Anderson has never made a bad movie, and certainly never a dull one. If he ever does, it would probably still run circles around whatever else is playing at the multiplex that weekend.

Licorice Pizza marks Anderson’s ninth movie, which is as good an occasion as any to reflect on his catalog thus far. Ahead of its release (Pizza opens in select theaters on Nov. 26 and nationwide on Dec. 25), TIME rewatched and ranked Anderson’s era-defining oeuvre.

One viewing of Inherent Vice won’t suffice. Even if you’ve read the Thomas Pynchon novel on which it’s based, this rambling tangle about a perpetually stoned private investigator (a mutton-chopped Joaquin Phoenix) drifting through a Manson-paranoid Los Angeles can feel as hazy as a cloud of pot smoke. It is, as the kids say, a vibe—and a dense one at that, tackling the changing cultural mores of 1970 with deceptively layered humor. For many, Vice is a “like it or leave it” situation. When consumed like a Long Goodbye-esque parade of unified tableaux guided by a fashionable cast (Josh Brolin, Owen Wilson, Benicio del Toro, Reese Witherspoon, Hong Chau, a scene-stealing Martin Short), the movie offers a groovy secondhand buzz. But it’s also a bit high on its own supply, lacking the emotional anchor needed to stay afloat.

Anderson got a rude awakening about Hollywood egos when the production company behind Sydney, his directorial debut, recut the film and named it Hard Eight. He acquiesced on the title but not the edit, ultimately convincing the powers that be to release his version. Even with Anderson’s thinnest plot, Hard Eight is pretty great. The movie has early traces of his signature flair: stylish tracking shots, piercing close-ups, expressive monologues, and a story that changes course around the midway point. A neo-noir about a down-on-his-luck stiff (John C. Reilly) and the mysterious gambler (Philip Baker Hall) who lends him a hand, this established Anderson’s bona fides, even though it was only released in 29 theaters.

The first thing you notice in The Master is Jonny Greenwood’s score, a propulsive ticktock that hypnotizes the audience before a single word has been spoken. The second is Joaquin Phoenix’s hunched posture. The arch in his back, combined with his unwitting snarl, makes him at once diminutive and imposing, childlike and depraved. His Freddie Quell is a man of contradictions, beleaguered by the horrors of World War II and susceptible to the allure of a seductive charlatan (Philip Seymour Hoffman, playing an L. Ron Hubbard type in a film with pointed Scientology parallels). The final thing you notice in The Master is that it’s somehow a love story between Freddie and his new guru, even if said guru’s wife (Amy Adams) tends to call the shots, sometimes while giving hand jobs. That uneasy constellation of spiritual crises, like all of Anderson’s films, rewards repeat viewings.

Unfolding like a series of ebullient vignettes, Licorice Pizza roams through Los Angeles alongside a precocious 15-year-old showman (Cooper Hoffman, son of Philip Seymour Hoffman) and the slightly older apple of his eye (Alana Haim of the rock trio Haim). It’s a coming-of-age frolic about a bunch of schemes taking place amid the encroaching chaos of 1973, bridging the rise and fall of waterbeds with an international oil crisis. This is Anderson at his freest. The plot zigs, zags and zips through the two young hopefuls’ whimsical adventures. Their detours along the way, particularly one involving an unhinged Bradley Cooper as larger-than-life Hollywood producer Jon Peters, form a sweet ode to the ingenuity of youth. Licorice Pizza is one huge grin in movie form.

Following the success of Boogie Nights in 1997, the suits at New Line Cinema gave Anderson carte blanche. What resulted was a three-hour mosaic of psychological freak-outs inspired by his stint as a PA on Quiz Kids Challenge, Aimee Mann’s music and the San Fernando Valley. Magnolia, with its feverish performances (Julianne Moore! Tom Cruise! Jason Robards! Melora Walters!) and where-the-hell-is-this-going velocity, is a movie about choices. Any choice a character makes sets off a chain reaction that spirals through the various narratives, which coalesce around a biblical squall in which frogs tumble from the heavens. Anderson milks the conventions of melodrama, assigning everyone’s experiences—no matter how mudaneor misguided—near-epic scope. When asked what he would redo about the film during a Reddit AMA four years ago, he responded, “Chill the f-ck out and cut 20 minutes.” Could it use a trim? Sure. But this is a rare behemoth unburdened by its running time, exemplifying Anderson’s masterly control.

After the unfettered sprawl of Magnolia, Anderson was determined to cap his next project at 90 minutes. Out of that came Punch-Drunk Love, at once, paradoxically, Anderson’s most fantastical and most grounded movie. To label it a romantic comedy feels limiting, though it is technically a love story about a jittery neurotic named Barry (a career-best Adam Sandler) and the shy sweetheart (Emily Watson) who takes a liking to his idiosyncrasies. Punch-Drunk is better described as a manic lark, from the abandoned harmonium that kicks off the story to the phone-sex extortion ploy that threatens to disrupt Barry’s newfound contentment. It’s a testament to Anderson’s peculiar dialogue and roving camerawork that he can make such a humanistic film that still manages to become an out-of-this-world fairy tale.

Boogie Nights established Anderson’s sense of scale. It’s a saga about family—the chosen kind, or at least the happened-upon kind—filtered through the disco-inflected California porn scene of the late ‘70s and early ‘80s. Anderson isn’t interested in trite ideas like “growth,” that gingerly Hollywood fixation that requires characters to change or mature by the time the plot expires. This menagerie of outcasts remain the same people they were when the film began, finding refuge in the employment of a demanding director (Burt Reynolds). Expanded from a short film Anderson made in high school, Nights is a master class in tone: dark, funny and oddly comforting, sometimes within the same scene. Alfred Molina’s drugged-out climax alone belongs in some kind of pantheon. The movie can also claim credit for turning Mark Wahlberg, best known at the time as hip-hop upstart Marky Mark, into a viable movie star. (He can thank Leonardo DiCaprio, who recommended Wahlberg for the role of well-endowed dunce Dirk Diggler because he’d already signed on to do Titanic.)

Anderson came up with Phantom Thread while sick in bed. “My wife”—that’s Maya Rudolph, though they aren’t technically married—“looked at me with a love and affection that I hadn’t seen in a long time,” he said. “So I called Daniel [Day-Lewis] the next day and said, ‘I think I have a good idea for a movie.’” That idea birthed one of the strangest and most rapturous romances of the last decade, in which tempestuous 1950s couturier Reynolds Woodcock (Day-Lewis) is mellowed by a soft-spoken muse (Vicky Krieps) who feeds him toxic mushrooms as a means of disarmament. It’s surprising to say that a film about the sadomasochistic eccentricities of coupledom produced Anderson’s wittiest script and prettiest cinematography, but Phantom Thread did exactly that. Just when you think Alma has set out to kill Reynolds, the film reveals itself to be a euphoric meditation on power, tenderness and the intimate negotiations that exist behind closed doors.

There Will Be Blood is the moment Anderson went from an exciting director to an essential one. At the time of its release, antiheroes weren’t as unusual in movies as they were on TV, with Tony Soprano’s influence trickling its way through prestige programming, and yet Daniel Plainview (Day-Lewis) feels almost unmatched in his brand of hyper-articulate monstrosity. An early-1900s petroleum capitalist, Daniel has a misanthropic streak—to put it lightly—that reflects a quintessentially American nightmare. Tearing his way through the undeveloped West with a devilish poise, he strikes it rich through greed and manipulation, those all-too-human attributes that would come to define the 20th century and beyond. A masterpiece loosely inspired by Upton Sinclair’s novel Oil!, this movie is at once a haunting psychodrama, a damning portrait of masculinity and a terrifyingly fun exercise in villainy.

Matthew Jacobs is a New York City-based culture writer specializing in movies and television. His work has appeared in Vulture, The Cut, Vanity Fair, The Hollywood Reporter, The Wall Street Journal Magazine and HuffPost.