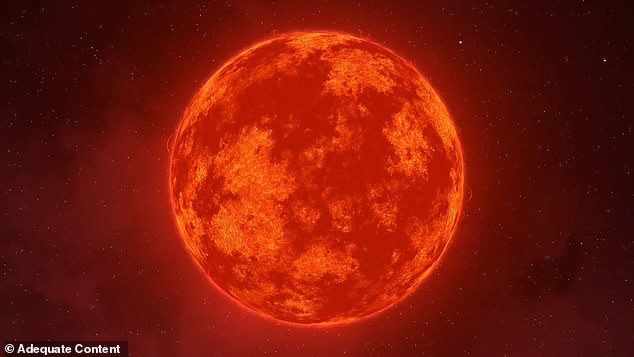 A British art collective plans to launch a collection of NFTs purporting to grant ownership of the stars, as the crypto-art craze shows no signs of abating.

The Ten Thousand Suns project, created by the Adequate Content collective, says it will issue 9,096 NFTs which correspond to every star visible with the naked eye from Earth later this month.

Each NFT will grant proof of ownership of a unique digital artwork created by the collective, consisting of an interactive representation of the corresponding star in the sky.

The whimsical project seems to have piqued the interest of Warren Buffett’s estranged granddaughter, the artist Nicole Buffett, who joined the group’s online chat server on Discord.

‘The absurd in art is a concept that is always kind of linked,’ said one of the creators in an interview with DailyMail.com. ‘That seems the point of art, to reach for the sublime.’

The Ten Thousand Suns project, created by the Adequate Content collective, says it will issue 9,096 NFTs which correspond to every star visible with the naked eye. Each NFT will consist of an interactive digital artwork depicting the corresponding star

What appears to be Nicole Buffett’s discord handle is seen on the group’s Discord. She did not respond to an inquiry asking about her interest in the project

An NFT, short for non-fungible token, is a unique digital token encrypted with an artist’s signature and which verifies its ownership and authenticity.

Prior high-profile digital assets to go up for sale as NFTs include Twitter CEO Jack Dorsey’s first tweet, which fetched $2.9 million, as well as the classic viral video ‘Charlie bit my finger’ which brought in $761,000.

The creators of Ten Thousand Suns acknowledge the phenomenon of ‘paying vast amounts of money for the digitally absurd’ helped motivate their project.

‘We thought, what is the greatest thing we could do, and that was taking possession of the stars themselves,’ said one of the creators, who requested not to be named due concerns about .

The art collective plans to launch the NFTs on December 22, to coincide with the launch of the James Webb Space Telescope.

Prices have not been set for the offering, but the backers say the tokens will likely range from 0.1 to 0.3 Ethereum, equivalent to about $400 to $1,200 at current rates.

The original art, seen above, will be in an interactive web format to view from any angle

The art collective plans to launch the NFTs on December 22, to coincide with the launch of the James Webb Space Telescope

As the sale progresses, the backers say they will introduce several benefits to holders, including an augmented reality view to identify the corresponding star through a phone’s camera.

Once the full run of tokens is minted, the creators claim they will use some of the proceeds to send one lucky NFT holder on a paid space flight.

Ownership of any object in space is prohibited by international treaty, a fact that the NFT creators jokingly acknowledge.

A number of companies have purported to sell naming rights to stars over the years, a practice that is denounced by the International Astronomical Union, which has sole legal authority to name celestial bodies.

The NFT space has suffered a number of notable frauds, including the Evolved Apes scandal, in which a developer absconded with $2.7 million in funds raised by the sale NFTs.

Guests interact with the NFT collection on display during Art Basel Miami on December 1. So far this year, NFT sales have surpassed $12.6 billion

The creators of the Ten Thousand Suns project insisted that their motives were pure, however, telling DailyMail.com: ‘all of the emphasis is on fairness.’

‘Art has always changed mediums historically,’ one of the creators said. ‘As technology develops, the medium of art changes.’

So far this year, NFT sales have surpassed $12.6 billion, and the craze shows no signs of abating.

At Art Basel Miami earlier this month, artists and gallerists latched on to the fad, and visitors were even invited to mint their own NFTs.

The record sale for an NFT was set in March, when a massive digital collage by Mike Winkelmann, aka Beeple, went for an astonishing $69.3 million at a Christie’s auction.