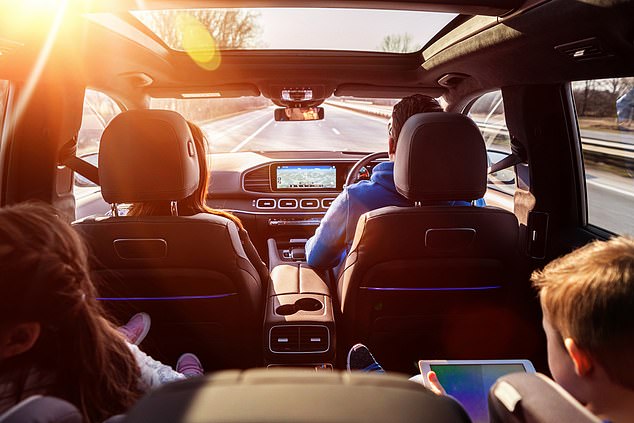 By Olivia Day and Charlie Coe For Daily Mail Australia

Thousands of motorists in NSW and ACT have been issued an urgent warning ahead of the public holiday as brutal double demerit penalties continue to be enforced.

Drivers have been urged to remain extra vigilant while traffic offences such as speeding or using a mobile phone while driving are punishable with double demerit points from 12.01am on December 24 until 11.59pm on January 3.

Those caught driving with two or more unrestrained passengers in the car will cop 12 demerits points, and could even lose their licence.

Motorists caught using their mobile phone while driving will get hit with 10 points, while those who break the speed limit by more than 45km/h would receive 12, one less than the state’s demerit point limit.

Police will punish driver’s breaking any of the four D’s: drink, drug, dangerous or distracted driving as thousands return home from Christmas interstate.

Exceed the speed limit by 10km/h and under (2 points)

Exceed the speed limit by over 10km/h (6 points)

Exceed the speed limit by over 20km/h (8 points)

Driver penalty for each passenger not wearing a seatbelt (6 points)

In NSW and the ACT, drivers lose their licence for three months once they’ve accumulated 13 demerit points, while it’s 12 points in Western Australia.

Residents in WA are subject to an even harsher set of double demerit rules that can be enforced from Christmas Eve until January 9.

Offences included in the double demerit rules include drink and drug driving, failing to wear a seatbelt, running a red light and illegal use of a mobile phone.

Motorists who are caught using a scrambler device – used to block a speed camera – could receive 14 demerit points.

Drivers in WA who exceed the speed limit by less than 19km/h will cost four demerit points, while using a mobile phone while driving is worth six points.

In the ACT, exceeding the speed limit by less than 15km/h will lead to two demerits while using a mobile device equates to eight.

Queensland, Victoria, the Northern Territory and South Australia do not enforce specific double demerit systems over the Christmas period.

However, drivers across all Australian states have been warned to act with caution with additional police presence cracks down on dangerous drivers.

Queenslanders caught committing an offence they have already been fined for in the last 12 months will be hit with double demerit points.

Victoria Police has said it will have a strong presence on the state’s roads over the festive period and will run a ‘knocking on doors’ TV advertisement campaign.

The campaign highlights one of the worst parts of a police officer’s job – telling someone their loved one has been killed in a road accident.

Traffic offences such as speeding or using a mobile phone while driving are punishable with double demerit points from 12.01am on December 24 until 11.59pm on January 3 in the NSW and the ACT (pictured, a policeman in NSW)

‘We hope everyone got what they wanted for Christmas because we didn’t. People are still speeding. Maybe next year,’ NSW Police posted to Facebook on Sunday.

‘This is the time of year for celebrating and being with those we care about, and anyone who travels to visit their friends and family needs to take special care to reduce the risk of not arriving safely,’ Dep Comm Lanyon said.

‘With rain predicted across the state in coming days, we also urge motorists to drive to the conditions and implore every road user to be aware of their surroundings and be courteous to others.

‘So far this year, 262 people have lost their lives on NSW roads and we do not want any more families to be without someone these holidays, especially due to recklessness or carelessness.’