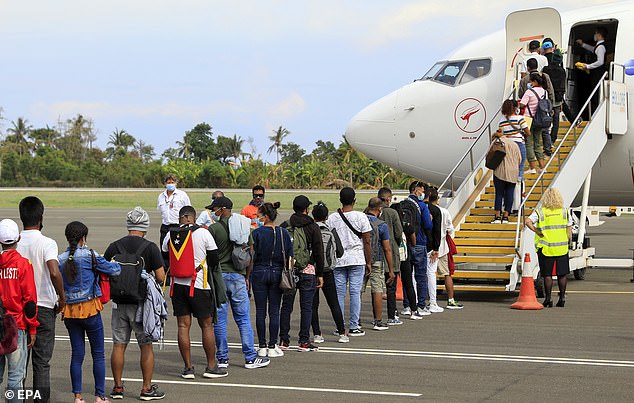 Australia urged to let even MORE migrants in for $120billion economic boost – as experts call for 350,000 overseas workers a year to flood Down Under

A huge increase in foreign workers could help boost Australia’s economy after nearly two years without an influx of overseas arrivals due to border closures, one of the world’s biggest firms has said.

Accounting giant KPMG has suggested bumping net migration levels beyond 350,000 per year as a means to reverse a population decline and stimulate demand, increasing the size of the labour pool.

The report says pushing migration to 350,000 people per year – equivalent to adding a city the size of Brisbane every seven years – would boost GDP by 4.4 per cent.

However with Australia’s house prices becoming increasingly unaffordable for average workers, a sharp spike in population and demand would not be without its downside.

The Grattan Institute said numbers alone would be counter-productive and the migration policy must tilt toward skilled workers.

Experts are calling for a mass increase in foreign workers to help lift Australia’s economy after the pandemic (pictured, East Timorese workers board a plane for Australia)

SHOULD AUSTRALIA LET IN MORE MIGRANTS?

The Big Australia population policy has been severely stifled throughout the pandemic, with borders closed to overseas arrivals since March 2020.

Those rules were recently relaxed for short time visa holders, but that did not stop Australia’s population dipping by 40,000 this year.

‘I am absolutely a supporter of increasing migration to Australia and at levels above what is in the Population Statement to ensure not only that we get the economic benefits, (but also) the social and cultural benefits you get from opening your borders and allowing a truly multicultural society,’ chief economist Brendan Rynne told The Australian.

Business groups are demanding the nation’s cap on permanent skilled migration to be bumped up to 200,000 per year, rather than the current 160,000.

Australia’s migrant population accounts for 10 per cent of its entire residents, but KPMG says more can be done.

The group says bringing in 350,000 skilled overseas workers per year would not only be worth more than $100billion for the economy but also see GDP raise 4.4 per cent.

The federal government have consistently refused to increase caps on migrants entering Australia, with the country set to fall below the population increases experienced for the decade to 2019.

Business groups are calling for more foreign workers to come to Australia, claiming it was create a huge boost for the economy (pictured, Melbourne Airport)

Over the next year 10 years the firm say there would be 540,000 less migrants entering Australia, 900,000 below the number needed to retain their 10 per cent population share.

Dr Brendan Coates from Grattan Institute’s economy policy program told the publication while migrant work boosts did aid the economy, the changes in GDP largely come from the workers.

He said while overseas employees certainly aided Australia, they have to be much higher skilled to move the needle.

‘Who comes matters as much, if not more, than the number of migrants that do come. Migrants, especially skilled migrants, boost Australian GDP per person,’ he said.

‘The big benefit from migration, especially skilled migration, is the fiscal dividend they generate for the Australian community because they pay more in taxes than they receive in public services and benefits over their lifetimes.’

Analyis from accounting giant KPMG has suggested bumping net migration levels beyond 350,000 per year – a figure that would be worth $120billion to the country (pictured, arrivals at Sydney Airport)