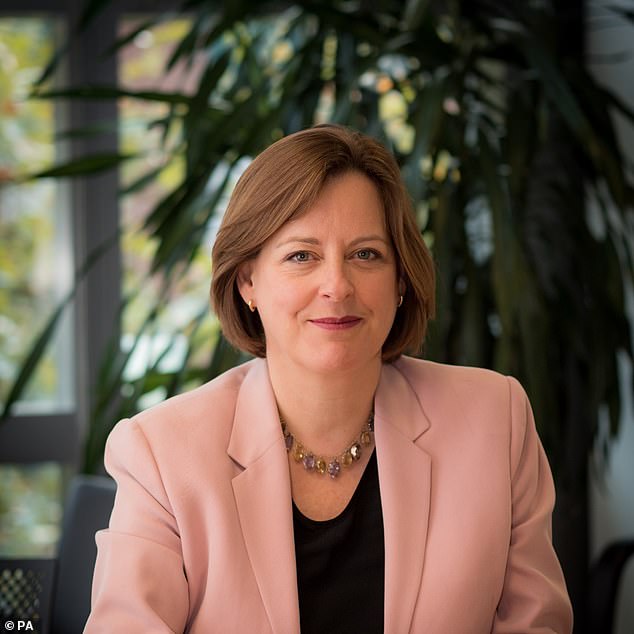 The BBC has to become less ‘London-centric’ in order to achieve impartiality, the head of Ofcom has warned.

Economist Melanie Dawes, 55, said Ofcom findings ruled that viewers’ ideas of impartiality are about ‘whether the stories resonate with them’ rather than balance as she called on the BBC to become regional.

Ms Dawes argued that the further away from London you go, where the BBC’s headquarters Broadcasting House is located, the more people think the BBC is not for them.

She told The Times: ‘We are pushing them hard on the need to stretch out across the UK much more comprehensively — in how they are run, how they make decisions [and] in who they employ behind the scenes.’

Her comments come as Mr Davie’s draws up a £700million plan to move programmes, including Radio 1’s Newsbeat, away from England’s capital to Birmingham, which Ms Dawes described as ‘ambitious’.

Economist Melanie Dawes (pictured), 55, said Ofcom research found that viewers’ ideas of impartiality are about ‘whether the stories resonate with them’ rather than balance

In March, the corporation said 400 jobs would be shifted from London to cities including Birmingham, Leeds, Cardiff and Glasgow.

As part of the plans, the BBC is set to create a £50million base in Birmingham, which will become a vital hub for the corporation’s increased regional investment.

Ms Dawes recognised the BBC’s director-general Tim Davie took the challenge ‘very seriously’ but she warned that the firm’s £224million move to Manchester did not change the fact that the decision-making power remained in London.

She also described Mr Davie’s £700million plan to move programmes, including Radio 1’s Newsbeat, away from England’s capital to Birmingham as ‘ambitious’.

Ms Dawes also plans to regulate large tech companies when the Online Safety Bill comes into force in 2023, giving Ofcom the power to impose fines of up to £18million, or 10 per cent of annual turnover, on firms that fail to protect users from online harm.

Culture secretary Nadine Dorries said regional accents do not ‘go down particularly well’ at the BBC and insisted the new licence fee deal will be joined with effects to improve regional and class diversity at the broadcaster.

Last month, Mr Davie announced a team of external experts are set to be appointed at the BBC to ensure its content is impartial.

Mr Davie has already cracked down on the issue by putting controls on staff sharing views on social media and an emphasis on neutrality in news roles, according to the Telegraph.

But the BBC will have the new experts from outside the corporation to analyse all the content the broadcaster puts out for signs of potential bias.

Investigators will do this by leading rolling reviews which look at different areas of output.

These will be everything from how tax news is covered to the contents of CBeebies programmes and will be done to ensure guidelines for impartiality are met across the company.

The initiative has been unveiled in a 10-point action plan to maintain editorial standards.

It says: ‘This strategic programme of reviews will have topics and review chairs – likely to be independent of the BBC.’

The action plan goes on to say that reviews will look beyond news and current affairs and will examine the treatment of the issue across the wider range of BBC output, for example in documentaries, children’s programming and educational content.

External experts will consider how the broader output might contribute to overall public perceptions of impartiality, while recognising that audiences have varying expectations of output.

Meanwhile, BBC business staff expressed worries over the plans to move 400 jobs from London to other cities across the UK, branding the decision as ‘ridiculous’.

In a letter to BBC chairman Richard Sharp last month, the World Service business team said they had ‘deep concerns’ that the quality of the Corporation’s coverage would suffer as a result of the 200-mile move to Salford.

Their letter to the chairman, seen by The Mail on Sunday, questioned whether the Salford move offered good value for money to BBC licence-payers.

‘[The plan] includes a proposal to reduce the amount of air time dedicated to business and relocate all 40 of our global business and economics journalist posts from London, the world’s pre-eminent financial centre, to Salford,’ it said. ‘This is a self-evidently ridiculous decision.’

The letter added: ‘Only two of us are considering a move to Salford as a serious choice. The rest cannot relocate. The loss of experience of global business reporting will surely damage the programmes and, consequently, the World Service as a whole.’

Ms Dawes argued that the further away from London you go, where the BBC’s headquarters Broadcasting House (pictured) is located, the more people think the BBC is not for them

The backlash deals another blow to the BBC’s attempt to restructure its newsroom by moving entire teams to other parts of the UK.

Three in four staff at Radio 1’s Newsbeat service have refused to move to a new base in Birmingham and Rory Cellan-Jones, the long-standing technology correspondent, quit after he was asked to relocate to Glasgow.

It focuses on programmes for an international audience which, say staff, makes it even more important that they be based in London to gain access to major companies, global conferences and international business leaders who work in and visit the capital.

In the letter, they described Salford as ‘starved of access to the people [they] need to meet’.

The team currently sits next to the BBC’s World TV business team in London and shares resources which, according to the letter, ‘has undoubtedly reduced duplication and has therefore been a cost-effective use of licence fee money’.

The World Service business staff suggested the relocation ‘of another, UK-focused programme or support team’ instead.

A BBC insider said ‘We’re also being asked to move for a pay cut because we lose London weighting [where staff receive a larger salary due to the higher cost of living in the capital] and the job descriptions are not clear.’

Another said: ‘Our sources are in London and our fear is it’s the beginning of a cost-cutting process whereby they will try to cover world stories using domestic journalists.’

A BBC spokesman said at the time: ‘We will continue to deliver quality business reporting to audiences around the world, including World Business Report.’