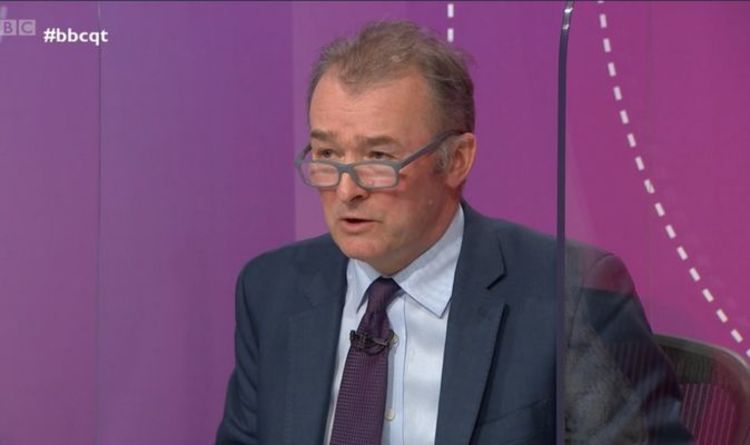 BBC host Fiona Bruce, 57, asked the audience in the Tory seat of Shrewsbury & Atcham whether those who backed Boris in 2019 have changed their minds.

She said: “There are a lot of people in this audience clearly who voted Conservative.

“Can I just ask, have any of you changed your minds?”

The Brexit-backing ex-Daily Mail journalist Isabel Oakeshott, 47, responded to the moment by saying: “Wow, look at that.”

Both Ms Bruce and Labour’s Shadow Domestic Violence Minister Jess Phillips, 40, added: “That is quite a lot.”

But Ms Oakeshott, who delivered a speech at Reform UK’s party conference in Manchester last October, issued a stern electoral warning to the Tory Party.

She said: “Let’s just wait until the May elections and see what happens.”

But Mr Hart, who supported Mr Johnson in the 2019 Conservative leadership race, appeared to struggle when Ms Bruce invited him to respond.

He stuttered: “I can see that with my own eyes.

“Of course, you know, do I want to come here and see that?

READ MORE: Have your say: Is Boris Johnson STILL the man for the job? Or is hi…

“Do I want to be in this position?

“Does Boris Johnson want to be in this position?

“And he said in the statement yesterday, there are lots of reasons why we wish we could turn the clock back to May 2020 and do things differently.

“We are not denying it, he is not denying that there were judgements made which would be made differently now and he has come to the House of Commons, he has apologised, I think in a heartfelt way, he has recognised that he, as the head of the Government, is ultimately carrying the can for these things and has set out the path by which he thinks we can get to a fair and reasonable conclusion at the end of this very short inquiry.”

The Conservative Party have already taken a pummeling in the opinion polls following ‘partygate’.

YouGov even found Sir Keir Starmer, 59, and the Labour Party had opened up a 10-point lead over Mr Johnson’s Tories.

But the response in Shrewsbury could be seen as yet another blow to Mr Johnson’s authority.

The constituency also borders the nearby seat of North Shropshire.

The Liberal Democrats claimed a monumental victory in North Shropshire back in December when they overturned a 22,949-vote majority.

The Tories held Shrewsbury & Atcham in 2019 with a slightly smaller majority of 11,217.

In the safe Conservative seat of Sutton Coldfield, which is around 50miles away from Shrewsbury, the chairman and officers of the local Tory grassroot association unanimously passed a motion of no confidence in Mr Johnson.