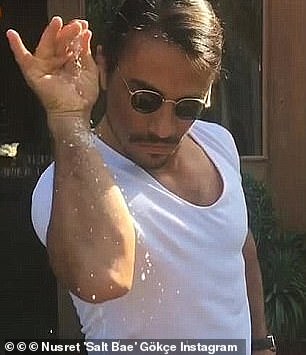 But the 38-year-old, from the central city of Danang, was swiftly hauled in by cops and denied trying to mock anyone – insisting that it was only intended as a ‘fun’ advert.

It came after a video of Salt Bae, real name Nusret Gokce, emerged earlier this month showing him hand-feeding a £1,450 tomahawk wrapped in gold to top Vietnamese Communist Party official To Lam.

Footage of To Lam, minister of public security in the country, seemingly enjoying the £1,450 tomahawk steak at Nusr-Et Steakhouse in Knightsbridge, London, emerged on social media last night

‘The video I made was for fun and for advertising my beef noodle shop. More customers have been coming since I posted it,’ said Lam, who added it was not clear if the police summons was because of his video.

Lam, who has previously criticised authorities on Facebook, said he had been ‘raising his voice for a better society’, and that police had previously summoned him for a meeting in April, without saying why.

Last week, Salt Bae uploaded a video of himself feeding Vietnam’s Minister of Public Security, To Lam, gold leaf encrusted steak at his London restaurant, where a steak sells for up to £1,450 ($1,960).

The original video was removed from Gokce’s TikTok account shortly after it was uploaded, and further copies were then removed from the app for violating ‘community standards’, Vietnamese users told Reuters at the time.

Days later, Meta, Facebook’s parent company, said it had unblocked the ‘#saltbae’ hashtag, having found the tag had been blocked globally after the footage emerged.

It was not immediately clear why the video led to the tag being blocked and a Meta spokesperson declined to comment on potential reasons.

While it was blocked, a search for the hashtag generated a message saying community standards had been violated.

Lam, from the central city of Danang, said his intention in making the video at his beef noodle stall was not to mock any particular individual but was made as a ‘fun’ advert

Turkish chef Nusret Gokce, better known as ‘Salt Bae’ cuts the steak for Lam (left), salts it in his signature pose (right), before feeding it to the official off his knife

‘We’ve unblocked this hashtag on Facebook and we’re investigating why this happened,’ a spokesperson for Facebook operator Meta said, confirming the tag had been blocked for all Facebook users around the world, not just in Vietnam.

In a US Congress hearing earlier this year, Meta Chief Executive Mark Zuckerberg said artificial intelligence plays a major role in ‘content moderation’, responsible for taking down more than 90 per cent of content deemed to be against Facebook guidelines.

Lam, 64, was in Britain during a visit by senior Vietnamese officials to the UN climate conference, COP26, in Glasgow.

But images of him chewing on the gilded beef caused a stir both on and offline in Vietnam, with many questioning how such a high-ranking Party official allowed himself to be caught on camera indulging in food carrying such a high price tag amid a state crackdown on corruption.

In one Facebook post, user Nguyen Lan Thang, with nearly 150,000 followers, changed his profile picture to a screenshot of the video, and pointed out that local media had been staying quiet over the incident.

‘Security officers following this account, have you seen the video of minister To Lam eating salt-sprayed beef? Do you know how many months salary you’d have to spend for just one piece of that steak?’ Thang wrote in one post.

It was not clear who paid for the meal. To Lam did not respond to a request for comment, nor did Vietnam’s foreign ministry, which handles foreign media enquiries.