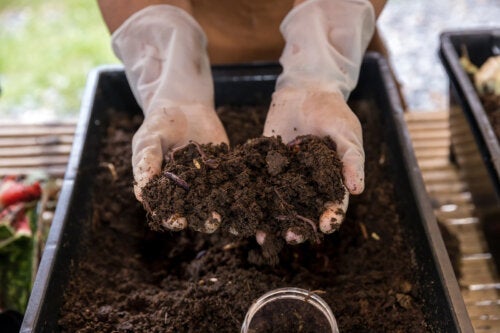 Are you looking for a healthy and ecological fertilizer for your garden? Worm humus stands out for its interesting benefits. Here we detail them.

For several decades, organic fertilizers have been booming and revolutionizing agriculture. Among these options, we find worm humus. Did you know that it’s one of the best options to nourish gardens and orchards? It’s environmentally friendly and provides interesting benefits.

Entities such as the Food and Agriculture Organization of the United Nations (FAO) indicate that this type of fertilizer is the most widely used in organic crops and family farming. The red Californian earthworm or Eisenia foetida is often used. And, even though it’s commercialized in nurseries and agriculture stores, it can also be made at home. Do you want to know more about it? Read on!

How is worm humus or vermicompost obtained?

Worm humus is also known as “vermicompost”, “vermicompost” or “garden humus”. It’s obtained through a process in which earthworms digest organic material and produce a liquid that functions as a fertilizer.

These animals decompose organic matter through the effect of their digestive enzymes and the microflora present in their organism. Thus, from their feces, a product with nutrients for the soil is obtained.

We suggest you read: 10 Ways to Use Epsom Salts in Your Garden

Although having a worm farm at home may seem strange, it’s actually a process that doesn’t involve any unpleasant work. In fact, with a good vermicomposter, designed specifically for the size and conditions of your garden, the work will be almost automatic.

Also, you can always choose to buy ready-made compost. Here are the main advantages of worm humus for the garden and vegetable garden.

1. It’s an organic and natural fertilizer

Organic fertilizers are ones that are produced from vegetable or animal waste, or those of mixed origin. They’re then mixed with soils to improve their characteristics and provide nutrients.

In this sense, the first advantage of worm humus is that it’s a totally natural fertilizer, with zero toxicity and 100% ecological.

Worm humus optimizes soil structure and activates soil microorganisms, which improves its quality for future crops. Its use not only promotes soil aeration but also helps to improve soil consistency. For example, it’s ideal for clay soils where it isn’t easy to cultivate.

Thus, with the application of compost, the soil can be transformed to a sandier grain, with greater capacity to produce healthy plants. In itself, it makes the soil softer, lighter, and easier to handle. This also makes gardening easier for the farmer.

Unlike other fertilizers, and unlike what one might expect, worm humus is almost odorless. For this reason, it can be used on houseplants or balcony plants without creating an unpleasant smell in the house.

The application of worm humus has a unique feature: it keeps the soil moist. Therefore, plants don’t require as much watering, unlike other fertilizers.

It also has a great capacity to retain the nutrients that come from the degradation of organic matter, which has a high presence of carbon, oxygen and nitrogen. In this way, it stimulates plant growth.

This fertilizer helps to detoxify the soil from chemicals that tend to damage it over time. In particular, it brings more stability to the pH and generates better nutrition for plants. Therefore, it’s one of the most recommended options for damaged soils.

In fact, if, for some reason, it’s necessary to use a chemical fertilizer, worm humus is compatible and can be applied to any crop. It even helps to keep away insects harmful to plants.

In seasonal areas, it’s best to apply worm humus during spring and fall. To do so, it should be spread over the length and breadth of the land to be fertilized. If it’s a process to recover the soil, it’s also important to water it constantly.

In addition, it shouldn’t be buried because the bacteria require oxygen. In other words, it should be applied on the surface. The compost can be stored for long periods without altering its properties.

However, liquid humus is also available on the market, in which the microorganisms present in worm humus are extracted and reproduced in an aqueous medium.

This can also be purchased with soluble plant nutrients, enriched with an algae extract. Liquid humus is easier to apply and has almost immediate effects.

Read more: Tools to Eliminate Weeds in Your Garden

Combine it with other good practices

In conclusion, worm humus has multiple benefits. For this reason, it’s an excellent alternative for fertilizing the orchard and garden. It’s a totally ecological product, which nourishes the soil and achieves healthier and stronger plants.

Despite this, it shouldn’t be ignored that its use should be complemented with other good practices in the garden. For example, the following:

Finally, it’s good to know that the presence of earthworms in the garden isn’t a bad sign; they aren’t eating the plants. On the contrary, it’s a positive sign because they’re an indicator of a soil rich in organic matter. Worms help to have healthy and strong plants, free of toxins that harm the planet.