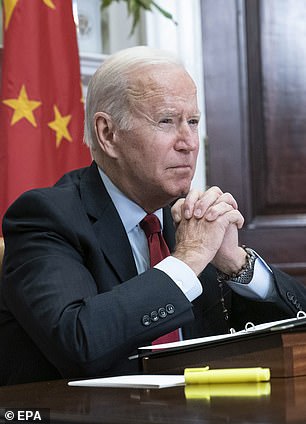 President Biden on Wednesday invited Taiwan to a democracy summit next month, a move that sent China into a rage.

The ‘Summit for Democracy’ will bring together developed democracies like France and Sweden, but also places where activists say democracy is ‘under attack’ like Poland, the Philippines and India.

The US does not formally recognize Taiwan’s independence and China sees the island as a rogue territory of the Peoples’ Republic of China.

China, which was left off the invite list, eviscerated Biden for the move, calling it a ‘mistake’ and accusing him of using democracy as a cover for oppression.

China’s Foreign Ministry said it was ‘firmly opposed’ to the invite.

President Biden on Wednesday invited Taiwan to a democracy summit next month, a move that sent China into a rage

Biden sat down for a virtual summit with Chinese President Xi Jinping last week, where Taiwan was a key point of discussion

‘U.S. actions only go to show democracy is just a cover and a tool for it to advance its geopolitical objectives, oppress other countries, divide the world and serve its own interests,’ ministry spokesman Zhao Lijian told reporters in Beijing.

Meanwhile, Zhu Fenglian, spokeswoman for China’s Taiwan Affairs Office, called the move a mistake and said Beijing opposed ‘any official interaction between the US and China’s Taiwan region.’

‘This stance is clear and consistent. We urge the US to stick to the ‘one China’ principle and the three joint communiques,’ she said.

Under the ‘one China’ principle the US acknowledges China’s claims to Taiwan, but does not say it recognizes the claim.

China considers Taiwan to be nothing more than an unruly extension of mainland territory. The US recognized the island democracy’s autonomy until 1979, but the two nations still enjoy a ‘robust unofficial relationship.’

Last week, in a further deterioration of the relationship between Washington and Beijing, the US announced it would hold a diplomatic boycott of the 2022 Beijing Olympics due to China’s own anti-democratic practices and oppression.

Taiwan’s foreign ministry accepted the invite and said it would send representatives.

‘Our country’s invitation to participate in the ‘Summit for Democracy’ is an affirmation of Taiwan’s efforts to promote the values of democracy and human rights over the years,’ the ministry added.

In Asia, U.S. allies like Japan and South Korea were invited to attend, while Vietnam and Thailand were not. In the Middle East, only two nations were invited- Iraq and Israel, leaving out allies like Egypt and NATO member turkey.

There are 110 participants on the State Department’s invitation list for the virtual event on Dec. 9 and 10, which will discuss bolstering democracy and human rights throughout the world.

Taiwan’s invite comes as China has begun to encroach on its territory, and has urged other nations to cut ties with the island. The US announced

The White House has sent out confusing messages on its policy toward Taiwan, with President Biden first saying the US ‘absolutely’ had a duty to defend the island if it were attacked. Hours later, the president’s press shop put out a statement saying there was no policy change, the US was still following the Taiwan Relations Act’s policy of strategic ambiguity.

Biden on Tuesday told a crowd he had made little progress to stop China’s encroachment on Taiwan, but ruffled feathers in Beijing when he used the word ‘independence.’

‘We made very clear we support the Taiwan Act, and that’s it,’ the president said. ‘Its independence,’ he added. ‘It makes its own decisions.’

Biden sat down for a virtual summit with Chinese President Xi Jinping last week, where Taiwan was a key point of discussion.

While there were no solid agreements on the self-governing island, the White House said Biden was firm in telling China not to disturb peace across the Taiwan Strait.

‘On Taiwan, President Biden underscored that the United States… strongly opposes unilateral efforts to change the status quo or undermine peace and stability across the Taiwan Strait,’ the White House statement said.

‘He was quite direct about his concerns about some of Beijing’s behaviors that he believed is at odds with both peace and stability across the strait,’ a senior official said.

China has built up its nuclear and defense capabilities to a point that the nation is either near or at capability to invade Taiwan, and are less fearful of the US stepping in.

Russian and Chinese warships patrolled in the Pacific Ocean in October

‘The PLA [People’s Liberation Army] has already achieved the capabilities needed to conduct an air and naval blockade, cyberattacks, and missile strikes against Taiwan,’ according to a report from the U.S.-China Economic and Security Review Commission, a congressionally-appointed agency designated to provide national security and economic advice to Congress and the president.

‘PLA leaders now likely assess they have, or will soon have, the initial capability needed to conduct a high-risk invasion of Taiwan if ordered to do so by CCP leaders. They will continue enhancing this capability in the coming years.’

The report found that the PLA’s current sea and air lift capacity could launch an initial landing force in Taiwan of at least 25,000 troops.

‘Given these developments, it has become less certain that U.S. conventional military forces alone will continue to deter China’s leaders from initiating an attack on Taiwan,’ the report found.

The commission argued that China is most likely to invade Taiwan if it believes the US ‘is not militarily capable of or politically willing to intervene, or if they interpret ambiguities in U.S. policy to mean that opportunistic Chinese aggression against Taiwan will not provoke a decisive U.S. response.’

The report found that Chinese President Xi Jinping had a high tolerance for risk and a desire to establish a lasting legacy, which could outweigh his concern for US warnings against attacking Taiwan.

It found that China’s nuclear buildup puts it on a trajectory to become the ‘nuclear peer’ of the US in quality, and a peer in quantity of land-based strategic missiles by 2030.

The US does not officially support Taiwan’s independence.

That evening while touting the bipartisan infrastructure bill in New Hampshire, Biden said the US was not encouraging independence.

‘I said that they have to decide — Taiwan, not us. We are not encouraging independence,’ he said.

‘We’re encouraging that they do exactly what the Taiwan Act requires,’ he said, referring to the 1979 act governing Washington’s relations with Taipei. ‘That’s what we’re doing. Let them make up their mind. Period.’

US officials tread lightly with a policy of strategic ambiguity, meaning they support Taiwan’s ability to defend itself without explicitly promising to come to its aid in the event of Chinese attack.

But, Taiwan’s president recently confirmed for the first time that American troops are on the island of Taiwan training the Taiwanese military, and have been there for about a year.

Chinese military forces held exercises last week near Taiwan in response to a visit by a U.S. congressional delegation to the island.