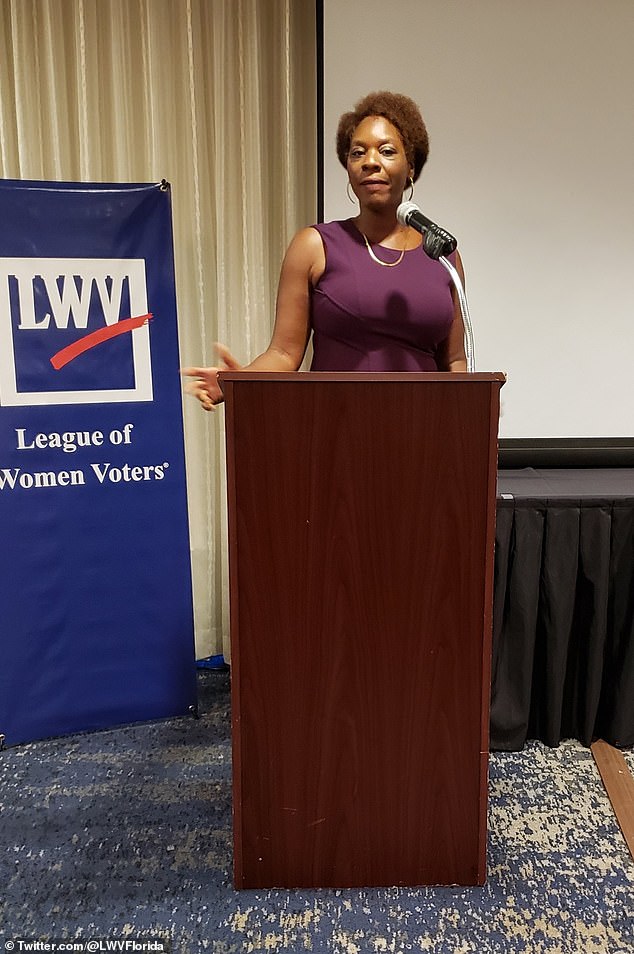 Nancy Gbana Abudu, a progressive attorney from Georgia, is the deputy legal director for strategic litigation at the Southern Poverty Law Center, where she focuses on voting rights.

She was previously at the American Civil Liberties Union of Florida, and also worked at the ACLU’s Voting Rights Project.

Abudu was nominated by Biden on December 23 to serve on the US Court of Appeals for the 11th Circuit, covering Alabama, Florida and Georgia. If confirmed she would be the first black female judge to serve on that bench.

‘When you add laws that prohibit people with a criminal conviction from voting, it’s practically the same system as during slavery – Black people who have lost their freedom and cannot vote.’

She wrote on June 12, 2020, ‘And without access to the ballot, a victim of the system cannot elect the very officials pulling the levers to hire the police, determine which cases are prosecuted and what sentences are imposed.’

Adubu is currently the deputy legal director for strategic litigation at the Southern Poverty Law Center, where she focuses on voting rights

The post was resurfaced by the Daily Wire on Saturday. The outlet also rediscovered a 2011 interview in which Abudu said ’95 percent’ of her work had to do with voting rights.

‘Obviously, we do a lot when it comes to voter suppression, which includes five priority areas: photo ID, proof of citizenship, restrictions we see when it comes to registration,’ Abudu told The Post and Courier.

She added that she was focused on ‘early voting as well as absentee voting and the restrictions we see when it comes to criminal convictions.’

Many of the measures she listed have been part of election security laws passed by Republican-controlled legislatures across the country.

She took issue with Georgia’s election laws in particular when asked about her ‘biggest’ concerns regarding voter suppression.

Georgia passed an election security law that went into effect this past April after the state narrowly went to Biden in the 2020 election. It’s been condemned by both voting rights activists as well as Republicans, the latter of whom believe it’s too weak.

In 2019 Abudu decried ‘discriminatory’ voting laws and said they were proof that the Jim Crow system of racial segregation was still prevalent.

‘We believe that voting is a human right, but we know full well that our nation’s history is inextricably linked with generations of struggle to expand voting rights,’ she said in a video for the SPLC’s Voting Rights Practice Group.

The 11th circuit covering parts of the deep South is home to 8.5 million black residents. However there is only one black judge on the 12-person panel, Charles Wilson, and he was nominated by former President Bill Clinton.

Biden’s record 40 judicial confirmations this year is the most any president’s successfully gotten onto the bench since Ronald Reagan, with 75 total nominations so far.

Of the confirmed nominees, 80 percent are women, with 53 percent being people of color, according to the White House.

Abudu’s deep experience in voting rights will be extremely relevant, White House officials and advocates say, especially considering the increasing challenges facing voters this year following a slew of GOP-led measures. She would also be the first judge of color to sit on the court from Georgia.

‘This is an extraordinary appointment,’ said Leslie Proll, senior adviser on judicial nominations for NAACP. ‘Nancy Abudu´s nomination addresses a breathtaking gap in representation on this Southern appellate bench.’

‘Her substantial voting rights expertise will be a welcome addition to this court, which has an outsized voting rights docket and is pivotal to protecting our democracy.’