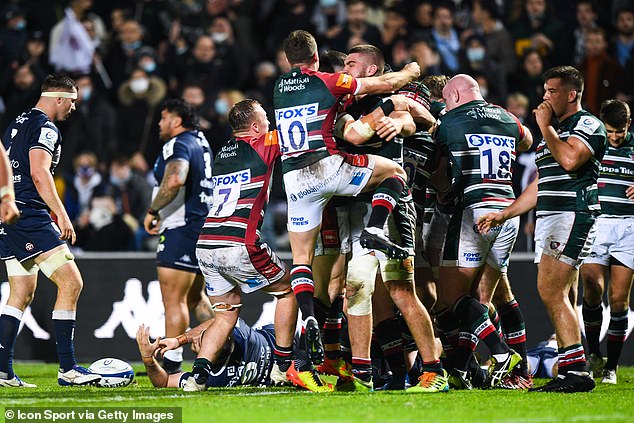 By Nik Simon For The Mail On Sunday

Perhaps the French TV producer should be forgiven for awarding the man-of-the-match award to a Bordeaux player with five minutes left to play. Who can blame them for dismissing Leicester as serious contenders? After all, until Saturday night, it had been 38 months since the Tigers won a match in the Champions Cup.

Furthermore, Leicester had made 11 changes to the team that beat Harlequins. The likes of Julian Montoya, Freddie Steward and Ben Youngs all made way. The lesser known faces of Ollie Chessum, Bryce Hegarty and Jack van Poortvliet stepped up and secured a famous victory away at the leaders of France’s Top 14.

Right through to the fringe players, Steve Borthwick is building a squad that has forgotten what it feels like to lose.

Yet it was old hand George Ford who proved most influential. The Sale-bound half-back contained Bordeaux’s power with 58 kicks from hand, before slotting the decisive penalty in the 77th minute.

‘Since the first day I walked in here, George Ford has been superb,’ said head coach Borthwick. ‘Nothing has changed. George made the decision for personal reasons and he’s handled it in a really respectful manner. I’ve been through that myself as a player and it’s a challenging time. Did we want George to stay? Yes, but he’s been absolutely superb and I’ve got no doubt whatsoever that he will give absolutely everything until his last day as a Leicester Tigers player.’

Ford’s kicks steered Leicester to a 13th consecutive victory. He levelled an early penalty from Maxime Lucu, before combining with Hegarty to set up Guy Porter’s try, while Kane Douglas was in the sin bin for a high tackle.

Moments later, Leicester winger Hosea Saumaki was sent to the sin-bin for a collision in the air. But Borthwick’s starting pack, featuring five players under the age of 22, held their discipline in defence and limited Bordeaux to just one try though Jean-Baptiste Dubié.

‘Players are going to make errors but I just ask them to play as hard as they possibly can and play tough,’ said Borthwick. ‘They do that. I’ve been here nearly 18 months now and through that period there have been a number of young players who made their first appearance for Leicester Tigers. Given the salary cap, it’s vital that we keep producing those young players.’

Bordeaux threatened to break away in the second half, after Lucu edged his side ahead from the kicking tee. Errors crept into Leicester’s game but Bordeaux failed to capitalise. The likes of George Martin, Harry Wells and Callum Green hit anyone who tried to pass.

Ford held his nerve. After one miss, he struck two penalties to leave Leicester hanging on to a narrow lead in the closing stages. Bordeaux had lost just twice at home in 12 months and they had a shot at victory in the 81st minute.

However, to the surprise of the French TV producer, and to Borthwick’s delight, Leicester repelled that final Bordeaux attack and held on for a victory to mark their return to Europe’s elite.

‘When they kicked the ball to the corner in the 81st minute, I thought to myself that I would be proud regardless the outcome,’ said Borthwick. ‘They came here to Bordeaux and had a really good go. We wanted to challenge them. The effort was magnificent and I’m proud of the players.’