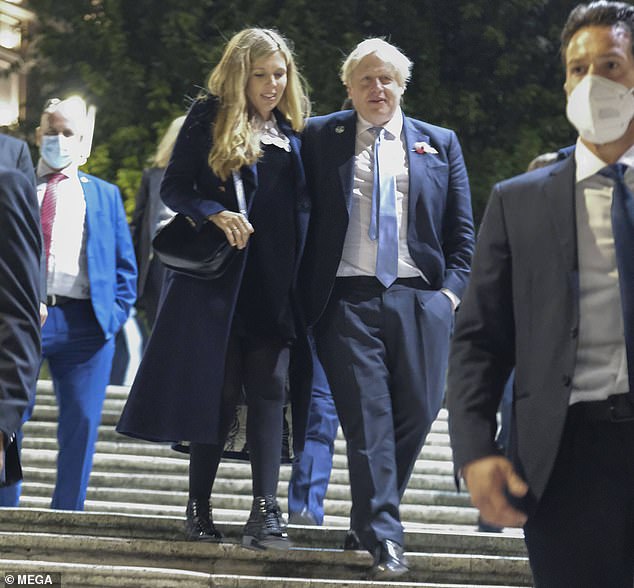 By James Tapsfield Political Editor and Emer Scully For Mailonline

Mr Johnson warned world leaders ‘the future of civilisation is at stake’ and compared climate change to the fall of the Roman Empire as he arrived in the Italian capital yesterday.

The Prime Minister gave an apocalyptic vision of the future and said society could return to the dark ages with ‘terrifying’ speed, as he desperately tried to build momentum ahead of the COP26 summit next week.

Mr Johnson delivered an extraordinary warning that generations to come could slump into illiteracy – and even suggested cows could get smaller.

He argued that after the collapse of Rome, civilisation even lost the ability to draw properly – saying ‘our children, grandchildren and great grandchildren’ could face food and water shortages.

At one point, Mrs Johnson knelt down on the steps while her husband looked around

The Prime Minister yesterday gave an apocalyptic vision of the future and said society could return to the dark ages with ‘terrifying’ speed, as he desperately tried to build momentum ahead of the COP26 summit next week

The comments came amid fears that the Glasgow gathering could end up as a damp squib.

China’s premier Xi Jinping has confirmed that he will not attend the event in person, although he will make a speech by video link.

Speaking to reporters en route to the G20, Mr Johnson said: ‘Humanity as a whole, at half time is about 5-1 down.

‘We have got a long way to go but we can do it.

‘We have the ability to equalise, to save the position, to come back but it will take a huge amount of effort.’

In a long description of the tragedy of the Roman Empire, Mr Johnson said ‘things can go backwards as well as forwards’.

‘Unless we get this right in tackling climate change we could see our civilisation, our world, also go backwards and we could consign future generations to a life that is far less agreeable than our own.’

COP26 begins in Glasgow on Sunday and will look to build on agreements made at the Paris climate summit in 2015 where nations agreed to try to keep global heating to below 1.5C