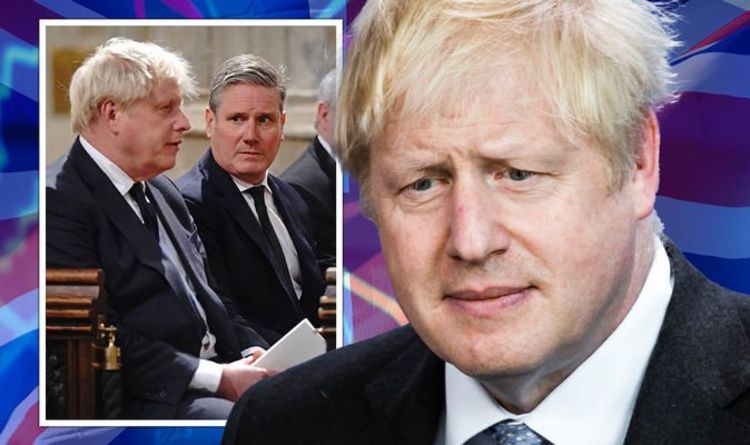 The three-point Conservative lead over Labour has collapsed as the party takes a battering due to the ongoing sleaze scandal after the Government was forced to make a U-turn over the controversial blocking of MP Owen Paterson’s suspension. Boris Johnson then refused to apologise over his handling of the next crisis which involved Sir Geoffrey Cox, who skipped Parliament votes to give legal advice to the British Virgin Islands government and took advantage of remote working to visit the luxury Caribbean island as part of his his £900,000 a year second job.

How the election polls have looked over the last two years

On July 1, 2019 – when Theresa May was in charge of the party – data from YouGov shows the Government’s approval level was the its lowest of any time over the past 28 months. Just 10 percent of those polled said they support the Government, with 70 percent saying they disapproved.

But it wasn’t to stay that way for long. Mr Johnson was elected at the end of that month following a leadership battle and the polls reflected such a change, buoyed by the new and popular Prime Minister’s arrival into Downing Street.

Those staggeringly high disapproval levels quickly petered out as support rose, a sure sign of the public’s confidence in Britain’s new leader.

READ MORE: Why Tory MP Geoffrey Cox is in even MORE hot water over sleaze row

The first voting intention survey since his election showed his party continued to hold 25 percent of the vote, versus 23 percent for Lib Dems with Labour in third on 19.

Even the COVID-19 pandemic did’t cause too much of a blip for the Prime Minister’s support; in fact, his support actually overtook those who disapproved on March 30, with an approval rating of 41 percent versus 34 percent.

In April 202, 53 percent of those surveyed for the YouGov Westminster voting intention tracker said they’d vote Tory at the next election, against 32 percent for Labour.

YouGov data then shows the disapproval rating rose to a high of 54 percent in November 2020, as the second lockdown came into place and Christmas was all but cancelled for most families across the country in response to rising infection levels.

But this, too, quickly settled down to a close split. In May 2021, disapproval was at 42 percent and approval at 38 percent, while the voting intention tracker shows the PM’s party on 46 percent versus Labour’s 28 percent.

Now, though, the polls show a downward spiral for the party, with the latest showing just 25 percent of people approve of the Government.

The latest Westminster tracker shows both are neck and neck on 35 percent, with the Conservatives having dipped from 41 percent on October 13 while Labour has risen from 31 percent.

While the Savanta ComRes survey, conducted on November 11, revealed a staggering 40 percent of Brits would vote for Labour in an election today, in comparison to the 34 percent who said they would vote Conservative.

Chris Hopkins of Savanta ComRes said: “These latest poll numbers are obviously striking, and while recent polls have begun to show slim Labour leads, none have been quite as comprehensive as this one”.

The poll is sure to be a huge blow to Boris Johnson. The embattled former London mayor is already said to have uttered his displeasure at the role he finds himself in, with a source last year saying he has “misery etched upon his face”.

They told the Times: “Boris, like other prime ministers, is very, very badly served. He doesn’t have a housekeeper, he has a single cleaner and they’re worried about being able to afford a nanny.

“He’s stuck in the flat and Downing Street is not a nice place to live. It’s not like the Élysée or the White House where you can get away from it all because they’re so big. Even if he or Carrie want to go into the rose garden they have to go through the office.”

And now with the polls take a hammering, his position is sure to become even more of a drain.

But while the Tories haemorrhage support, what does this mean for Labour? Well, unfortunately for Keir Starmer, the data shows he’s still far less popular than his Tory rival.

Mr Johnson has a popularity rating of 34 percent while the Labour leader commands a measly 17 percent, and only makes it 21st on the list of the most popular Labour politicians.

But it’s not all good news for the current PM as he’s actually the second most popular member of his party, with Rishi Sunak coming’s in the top spot with 36 percent.