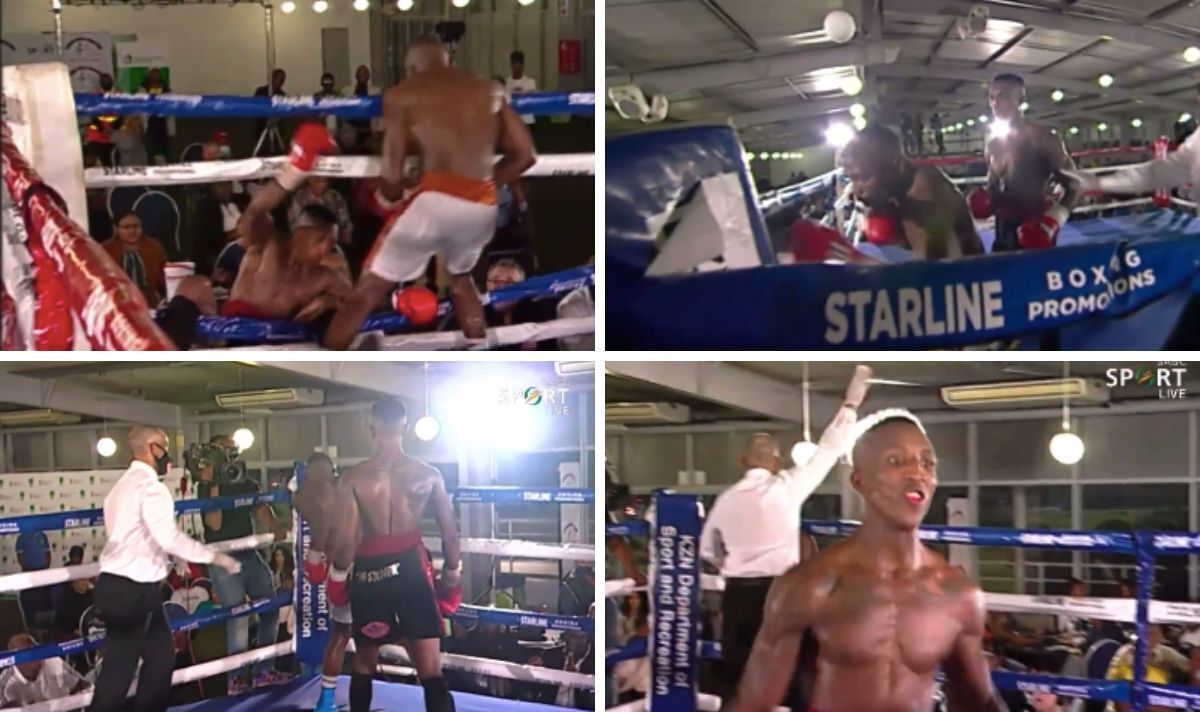 South African boxer Simiso Buthelezi was stopped by the referee for punching thin air just moments after knocking his opponent through the ropes, in concerning footage that has been described as ‘inexplicable.’ The incident occurred during the 10th and final round of his World Boxing Federation African lightweight title bout against Siphesihle Mntungwa in Durban on Sunday.

The world of boxing is now issuing prayers for the welfare of Buthelezi, who was placed under immediate medical care following the horrifying yet bizarre ending to the bout.

A hard jab from Buthelezi had initially sent his opponents tumbling into the ropes as Mntungwa struggled to stay on his feet.

Mntungwa staggered backwards after absorbing the punches and it looked like Buthelezi was on course for victory.

But while applying the pressure, Buthelezi seemingly punched himself out as his face was pressed against the ropes.

Yet he was still seemingly aware of the knockout, taking two strides backwards into the centre of the ring before the referee swooped in to check on Mntungwa.

Mntungwa was able to get to his feet and was deemed fit to continue as the referee resumed proceedings.

However, as the middle man stepped back into the corner of the ring, Buthelezi incredibly appeared to think that the referee was his opponent, as he stalked him down.

The official moved to the side as Buthelezi began to punch thin air – even though there was nobody in his crosshairs.

After a brief moment of confusion, the referee realised there was a major problem, stepping in and calling the bout off.

The South African commentator describing the worrying scenes said during the broadcast: “He turns, then looks at the referee, carrying in like he wants to fight.

“Yet throwing punches, he doesn’t know where he is.”

Buthelezi was removed from the ring immediately and placed under medical care.

The WBF made the decision to postpone the belt presentation for Mntungwa.

There have also been suggestions from those who watched the fight live that Buthelezi may have been suffering from a concussion as early as the third round.