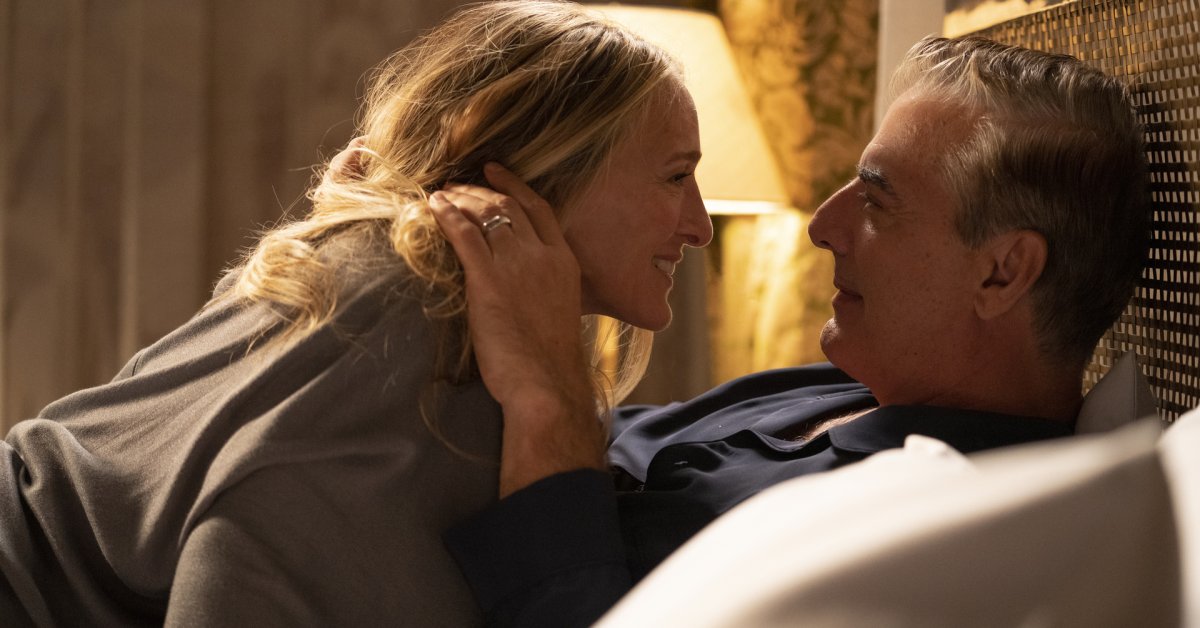 Warning: major spoilers ahead for And Just Like That

And Just Like That is probably not the Sex and the City sequel that most fans were expecting. For one thing, none of the main trio—Carrie (Sarah Jessica Parker), Miranda (Cynthia Nixon) or Charlotte (Kristin Davis)—has sex, or at least they don’t in the first four episodes made available to journalists.

But what’s most surprising is the shift in tone on HBO Max’s extension of the franchise, the first two episodes of which drop on Dec. 9. And Just Like That is not a romp. It’s not a happily ever after. It’s a show about grief and learning to evolve. That turn may be unexpected. But it’s not uninteresting.

Why that Big twist was necessary

Okay, here’s the big spoiler: At the end of episode one, Big dies.

After a tough workout on the Peloton, Big—who has a history of coronary issues—suffers a heart attack. Carrie walks in the door to find him already collapsed in the shower.

It’s unclear how we as an audience are supposed to feel about Big’s death, though I’m sure the folks at Peloton will be none too pleased. Prior to Big dying, Carrie and Big’s relationship—what little we see of it in this new show—seems rosy. Perhaps it’s a bit too rosy given the couple’s many ups and downs over the course of six seasons and two movies.

A brief recap of their toxic relationship: Big dated Carrie, hid Carrie from his mom, moved to Paris without including her in his plans, married another woman, cheated on that woman with Carrie, abandoned Carrie at the altar, re-proposed to Carrie, suggested that the two spend time apart and finally bought Carrie a wedding ring after Carrie cheated on him with her old flame, Aiden.

As one of the attendees at Big’s funeral notes, “Am I the only one who remembers what a jerk he was to her?”

Personally, I always thought Carrie and Big were bad people who deserved each other. (New Yorker critic Emily Nussbaum put forth the definitive theory that Carrie is not a hero but, in fact, a “difficult woman,” akin to difficult men on TV like Walter White or Don Draper.)

And yet: reader, I cried. I wept for TV’s worst boyfriend. I did this even though the show seems to care more about losing the aesthetic of Carrie and Big than losing Big, the human person. When Big is dying, Carrie runs to him in the shower, and the camera zooms in on Carrie’s blue Manolo Blahniks getting soaked and ruined—the same shoes, we’ve been reminded, she wore during their wedding. In another scene, Carrie freaks out when a friend accidentally breaks an expensive framed photo of her and Big together. They’re vapid metaphors for the end of a toxic marriage. But still, I cried.

For those who remember Sex and the City as a comedy, Carrie in mourning may be an unappealing pitch. True, the original show did deal with serious topics like infertility and cancer. But the most meme-able and memorable moments were Samantha’s outrageous one-liners or Samantha achieving orgasm atop a Mercedes. Without Samantha, And Just Like That simply cannot capture the spirit of the original series.

More: Sex and the City Is Nothing Without Samantha Jones

It’s not Sex and the City without Samantha

Samantha—the woman who scandalized us, made us laugh, doled out nuggets of wisdom like “Marriage doesn’t guarantee a happy ending. Just an ending”—is missing. Actor Kim Cattrall’s departure from the show was complicated, and there’s plenty in the script for And Just Like That to keep fans theorizing about the real-life fallout between Cattrall and Parker. Carrie admits that she let Samantha go as her agent after the book market faltered. Samantha took the business breakup personally, moved to London and iced out all three of her friends. At one point, Carrie says, “I thought she saw me as more than an ATM.” But the show does offer Samantha a grace note in the second episode during Big’s funeral.

Without Samantha, the pivot in tone feels necessary. The show also tries to fill the Samantha-sized hole with new cast members. Bradshaw and the rest of the cast and crew have acknowledged that the original series was unrealistically white, and several women of color have been cast in the sequel.

Grey’s Anatomy star Sara Ramirez is a welcome addition as Carrie’s nonbinary boss Che, who continually challenges the characters about their notions of gender and sexuality. Karen Pittman’s Dr. Nya Wallace gets her own IVF subplot that in some ways echoes Charlotte’s IVF journey in the original series, but with a complicated twist: Unlike Charlotte, who always knew she wanted to be a mother, Nya expresses doubts about parenthood.

Sarita Choudhury joins as Carrie’s posh realtor who has never been married and sheds light on the dating app experience for women in their 50s. And Nicole Ari Parker and Hamilton’s Chris Jackson, friends of Charlotte’s, are such a delightful couple that one might begin to long for a show set in their perfectly appointed penthouse rather than Charlotte’s.

Frustratingly, none of these women break into the coveted clique, at least in the early episodes. And the new cast members spend an awful lot of time educating the core trio on why a comment about a Black woman’s hair might be offensive or how to ask people about their preferred pronouns.

Aside from mourning, the main concern of And Just Like That is identity politics: Carrie, Miranda and Charlotte, now in their 50s, spend most of the episodes’ runtimes struggling to learn how to “get things right.” And yes, that leads to plenty of cringe-worthy moments, like Miranda quoting How to Be an Antiracist to a Black woman or Charlotte bullying her child into wearing a dress when doing so clearly makes the kid uncomfortable.

To their credit, Parker, Nixon and Davis happily embarrass themselves in order to expose their audience (which will probably span from Gen Z to Boomers) to important conversations about gender, sexuality and identity. Charlotte struggles with how to support her younger child’s exploration of gender identity. Early episodes suggest that Miranda may learn that she is more sexually fluid than she originally thought. And Carrie, presumably, will have sex again after mourning Big’s death, one of the few emotionally challenging moments in a person’s sexual life that the original show didn’t cover.

A few episodes in, even the choice to kill Big seems a wise one. Carrie is returning to her origins: Single again, back to her old apartment and back to obsessing over her imperfect husband’s many secrets (even in death). In search of answers, she hunts down Big’s ex-wife, Natasha (Bridget Moynahan). Carrie stalking Natasha is strangely comforting, if ethically questionable.

At one point, when Carrie brings Charlotte and Miranda along on a trip to spy on Natasha, Charlotte, grasping for something mean to say about Carrie’s old nemesis, spits out, “She’s wearing flats!” It’s such an absurd insult, not only because Carrie, Charlotte and Miranda’s five-inch heels are impractical even for the most well-appointed Manhattanites, but because it was Carrie who wronged Natasha when Carrie and Big began their affair.

While we want these women to learn and grow and stop offending people, for entertainment’s sake we also want them to continue be the worst. We want them to remain a little bit vain and petty and taboo. Those are the original characters. And that’s when they’re at their most fun.