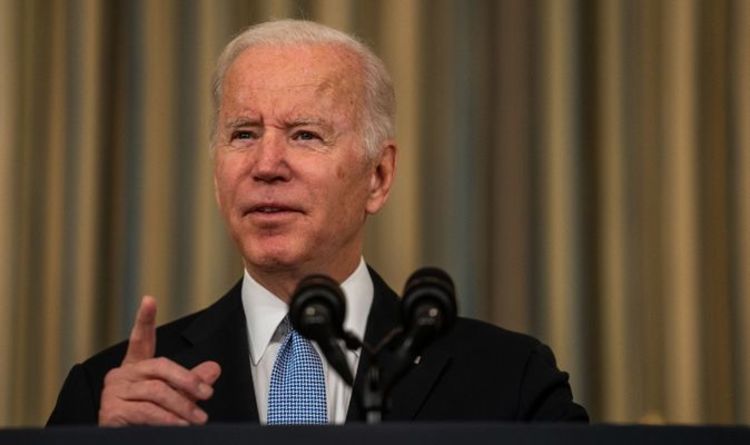 The US president praised the team in a video call after players beat New Zealand’s All Blacks 29 – 20 at the Aviva Stadium in Dublin on Saturday. He said: “We’re so damn proud of you, really and truly.”

Mr Biden was joined by his brother Jim and sister Valerie on the call in which he said: “When I was down in New Zealand not long ago I was bragging about you guys. They almost didn’t let me off the island.”

It comes after Mr Biden backed Brussels over Britain on the Northern Ireland Protocol, according to EU Commission President Ursula von der Leyen.

Ms Von der Leyen joined told her 666,000 Twitter followers the president agreed with the Brussels bloc that Brexit Britain should maintain the current terms of its post-membership deal with the EU.

A statement released on the US Government’s Foreign Affairs Committee website includes a response to UK “threats to suspend the Northern Ireland Protocol of the EU withdrawal agreement”.

It adds that in threatening to invoke Article 16 of the Northern Ireland Protocol in its trade row with the EU, the UK could “not only destabilise trade relations” but also the “hard-earned peace” negotiated under the Good Friday Agreement.

It continues: “We call on the UK to abandon this dangerous path, and to commit to implementing the Northern Ireland Protocol in full”.

The US position adds to speculation that the US favours a trade deal with the EU over the UK.

Last month, Julian Jessop, Economics Fellow at the Institute of Economic Affairs, acknowledged there is little appetite in Washington for a wider Brexit deal.

He told Express.co.uk: “The US appears to be in no hurry to do a major trade deal with the UK. However, it should still be possible to do a series of mini-deals in less sensitive sectors.”

The US is the UK’s largest single trading partner with total trade reaching £196.3 billion last year.

Overall, more than £761 billion ($1 trillion) is invested between the two economies and the US was the top destination for UK foreign direct investment in 2019. The US was also the top investor in the UK.

The Government insists it is standing by to continue negotiations on a deal when the US is ready. The US is currently reviewing progress made so far with the countries expected to discuss next steps when that review concludes.

There have been five rounds of negotiations, which began in May 2020, with a significant proportion of legal text agreed.

Conservative MP Peter Bone told Express.co.uk: “Obviously, all free trade deals are important because they are better for everyone, for the consumer and industry.

“I accept the argument Joe Biden doesn’t seem as keen on [a US/UK free trade deal] as perhaps President Trump, but I think as long as both sides see it as to their advantage, it will happen.

“If you can do it, it will lower prices for the consumer and increase trade between the two countries and therefore increase employment as well. There are reasons to do it if it can be in the interest of both sides. It’s a shame that President Biden doesn’t seem that interested.

“It might be that an agreement happens quite quickly, but it won’t be because President Biden is pushing for it. It would be because it’s in both parties’ interest to do it.”

On why Biden may not be as keen as President Trump, he added that the jury is out on what Mr Biden’s motive is.

He said: “It may be just something that is not top of his agenda. It’s clearly in everyone’s interest to get a free trade agreement, you would think there are people willing to push for it in the States.”

A Department for International Trade spokesman said the UK and US enjoy a thriving trade and investment relationship, which supports more than a million jobs and an ambitious free trade agreement with the US could deliver a £15.3 billion increase in bilateral trade.

He added: “We have made good progress with the US in recent months on trade issues, ending the ban on British beef and drawing a line under the Large Civil Aircraft tariffs dispute, and have worked together closely via the G7, G20 and [World Trade Organisation] to advance our shared global trade priorities.”