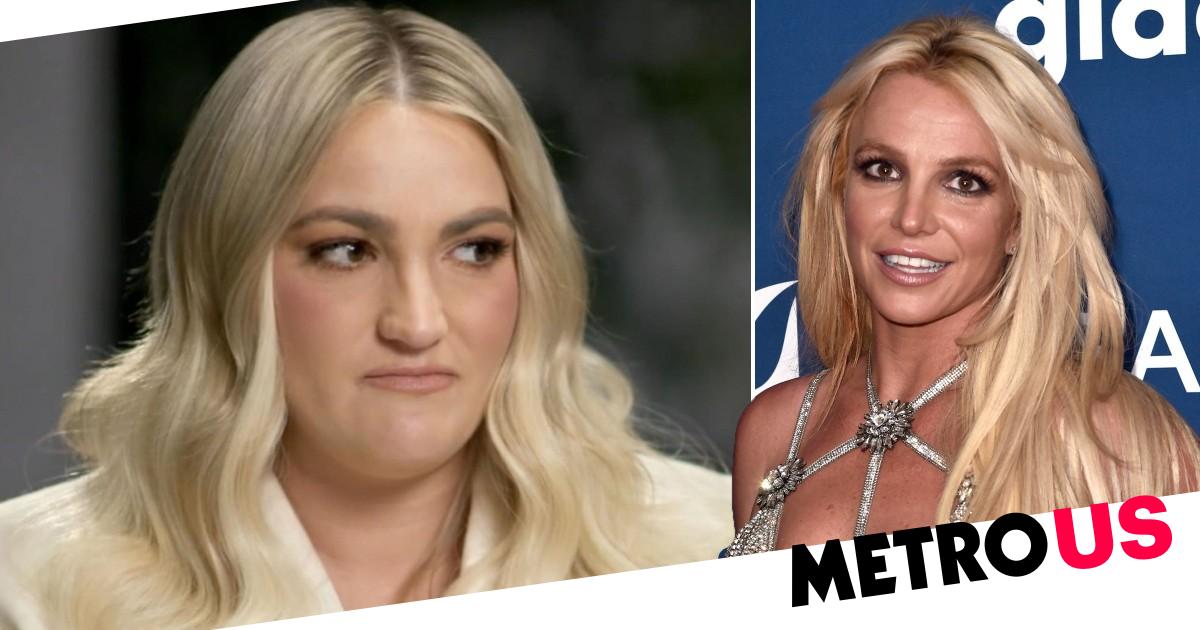 Britney Spears has issued another scathing response to her sister Jamie Lynn following comments she made about the musician in her new book.

In her memoir, Things I Should Have Said, Jamie Lynn, 30, claims Britney once pulled out a knife and locked the two in a room.

The pop star, 40, took to Twitter to release another statement in response to her sister’s claims, directly telling her she has ‘stooped to a whole new level of low.’

Emphatically denying her claims, the Gimme More hitmaker wrote: ‘Jamie Lynn… congrats babe! You’ve stooped to a whole new level of LOW … I’ve never been around you ever with a knife or would I ever even think to do such !!! The only knife I ever saw you with at home was cutting the biggest pieces of squash I ever saw in my life and it was way too big for me to cut.’

Britney continued: ‘So please please stop with these crazy lies for the Hollywood books !!! NOW and only NOW I do know only a scum person would make up such things about someone …. I’m actually very confused about you making that up because it’s honestly not like you at all !!!! Around the kids ???? Jamie Lynn, seriously ??? Come on !!! Congrats on introducing your older sister the concept of getting LOW … LOWER … LOWEST … because you win on that one, babe !!!!’

The music icon’s comments aren’t the first time she’s called out her sister, as the two made headlines following Jamie Lynn’s appearance on Good Morning America.

The actress was pressed on her strained relationship with her sibling on GMA, as she admitted things have grown ‘complicated’ between the pair.

In the interview, Jamie Lynn claimed that she had tried to help Britney during her 13-year conservatorship, and had ‘only ever done right by her’ during that time.

She told Juji Chang that she ‘loves’ her sister, but the Toxic songstress said she ‘wants to sell a book at my expense.’

Britney took to Twitter to address the viral TV appearance, sharing a lengthy post telling fans that she watched it while feeling unwell with a fever.

She told her followers: ‘The 2 things that did bother me that my sister said was that my behaviour was out of control. She was never around me much 15 years ago at that time… so why are they even talking about that unless she wants to sell a book at my expense ??? REALLY???’

Britney had also previously claimed she was blocked from performing remixes of her own songs while Jamie Lynn was allowed to take them on, another issue addressed in the interview.

Explaining her upset about this, Britney added that ‘everything was always given’ to her sister, while Britney penned the tracks while Jamie Lynn ‘was the baby.’

‘If you were me, you might understand asking for 13 years for remixes to go into a small venue show and on tours!!!!’ she wrote.

‘They all got to DO IT and PLAY ME and I always sat there and took it,’ adding: ‘So yes, they did ruin my dreams.’

Britney alleges that when she confronted Jamie Lynn about it, her younger sister responded: ‘Well, it wasn’t my idea.’

She signed off with a sarcastic: ‘Hope your book does well, Jamie Lynn!!!!’ before revealing she’ll be taking an Instagram break due to the media being ‘extremely hateful’ towards her.

The Slave 4 U singer said she ‘was never given back ever what I want.’

Following Britney’s post, Jamie Lynn refuted her claims in a statement on Instagram, which she said was the ‘last thing’ she wanted to be doing.

She wished Britney well with the nickname ‘Brit,’ saying: ‘Brit, I am always here, you know behind the scenes I have always been here.’

She claimed that their exchanges in private ‘don’t match’ what Britney posts on social media but didn’t want to ‘diminish’ her experience all the same.

Jamie Lynn continued: ‘Quite frankly, the things being said are absolutely not the truth, and I have to clarify that, because now it’s getting harder for me to rationalise to my oldest daughter why our family continues to get death threats, as a result of their aunt’s vague and accusatory posts, especially when we know she could tell the truth, and put an end to all of it in one second if she wanted to.’

She added that she wanted to ‘set the record straight’ to ‘protect mine and my family’s well being,’ adding that her book is ‘not about’ Britney specifically.

Jamie Lynn concluded by admitting it is ‘time to put an end to the unhealthy chaos that has controlled my life for so long.’


MORE : Jamie Lynn Spears side-steps question about rift with sister Britney and insists she’s ‘only ever loved and supported her’ in bombshell TV interview