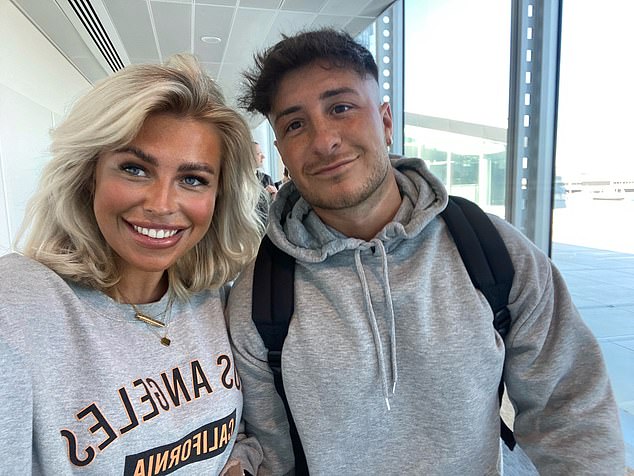 Brits caught up in the ongoing chaos at airports revealed their horror stories today, from dream holidays cancelled at the departure gate by text and going without luggage for four days with no warning to standing in a 500-deep queue with one member of staff.

Have you been hit by travel delays today or had your holiday cancelled?

Email rory.tingle@mailonline.co.uk with your story

There has been chaos, confusion and cancellations at the majority of the UK’s airports over the past four days as families try to get away for half term and the jubilee, with 6,000-plus flights to and from Britain due each day peaking next Monday.

There have also been long delays at Dover for drivers heading to France and delays at St Pancras for Eurostar services to the continent.

People have queued through the night to check-in while some brought pillows and duvets knowing they would be forced to sleep on terminal floors. Others slept on baggage carousels while waiting hours for their suitcases, some of which never arrived and are missing 96 hours later.

Airlines and airports have been blamed for the carnage having slashed staff during the pandemic while hoovering up furlough payments and state aid. Now they do not have enough workers to cope – and cannot find people to fill often low-paid vacancies – as the numbers booking foreign holidays over the Platinum Jubilee week and through the summer months hit pre-pandemic levels.

Below is a snapshot of how the chaos is affecting passengers.

Legal reviewer Paris Nedderman and James Palmer were left waiting for their luggage for four days after it got ‘stuck’ at Manchester Airport – but never received any communication from carrier Ryanair to tell them what had happened.

Ms Nedderman, 23, and her 28-year-old boyfriend left for Bologna in southern Italy on the morning of May 28.

She described Manchester Airport as an ‘absolute shambles with minimal staff, huge queues, broken conveyor belts and a lack of organisation’.

Paris Nedderman, 23, and her 28-year-old boyfriend James Palmer left for Bologna in southern Italy on the morning of May 28.

After arriving at Bologna Airport, the couple and around 60 other passengers spent three hours waiting to be told what had happened to their luggage.

‘The lady at the lost baggage desk informed us that ”the conveyor belt broke” in Manchester so they still had our luggage,’ she told MailOnline.

‘Kids were crying and parents were anxious as they knew they would have to bear the expense of having to buy lots of new clothes, suncream and whatever else was in their case.

‘During our time in Bologna we spent over 200 euros on clothing for the week because we did not know when we would get our bags back due to the lack of communication.

‘We are now on day 4, and have only just received a call from Bologna Airport to say that the case has been received and they will get it on the next flight to us. Still no call from Manchester Airport or Ryanair, we are disgusted.’

MailOnline has contacted Manchester Airport and Ryanair for comment.

Family fear they could be left £4,000 out of pocket

Steven Hession, 45, was supposed to be flying from Manchester Airport to Kos on Saturday with his wife, Kerrie, and their two children for a fortnight and an upcoming family wedding.

But after hours of delays and chaos, the family got to the departure gate only to get a text message from airline TUI informing them that their flight and holiday had been cancelled due to ‘significant operational disruption’ – believed to be a missing pilot.

Mr Hession, from Blackburn, Lancashire, said: ‘It was horrendous; even on arrival to check in at Terminal 2, the queues were stretching right back to Terminal 1.

‘After many hours of delays, we were at the boarding gate just after 7pm and there was no staff one there, but then we saw the cabin crew walking through to the plane, which made us feel reassured.

‘But then we heard people crying… and everyone got this text at the same time saying unfortunately, your holiday has been cancelled, click this link to get a refund within 14 days.’

Steven Hession, 45, enjoys some fizz as he heads to Manchester Airport with his family for a £4,000 two week break to the Greek island of Kos. Hours later, after long delays, the entire break was axed

Kind friends turned up in the middle of the night to take the disappointed family back to Blackburn, meaning that they arrived back home just after midnight, almost 13 hours after they had left home for what they thought would be an amazing fortnight overseas.

Fortunately, the bride and groom managed to fly out to Kos on Sunday, and Mr Hession booked new flights for himself and his family in time for the wedding.

He is due to fly from Newcastle on Wednesday, and his wife and children from Leeds Bradford Airport, at considerable extra cost.

But he says questions hang over their accommodation when they get there, and that if they do manage to find some, they could lose their refund.

Mr Hession added: ‘Now that we have got the flights, it’s a gamble because our hotel is full as it’s half term… the TUI representative is telling people that if they turn up that means your holiday’s valid so you might not get a refund.

‘The holiday itself was four grand, and I’ve spent a grand on new flights, and around £200 on minibuses for them. If we get to the hotel, it could be that they have accommodation and look after us, and pay for the extra cost, or it could work out another three or four grand.’

TUI said: ‘We would like to apologise to some of our customers who have experienced flight delays in recent days.

‘The May half-term holidays are always an incredibly busy period with many customers looking to get away, and this year is no different.

‘We understand that many of our customers have been looking forward to these holidays, as it’s the first peak period in more than two years that hasn’t been impacted by border closures and mass testing requirements. Our priority is always to take customers on holiday safely.’

A mother said her five-year-old daughter didn’t want to go on holiday ‘ever again’ after the family went through a ‘shocking’ experience with TUI.

Kim McManus, 40, from Widnes, was due to fly out to Turkey on Friday for her daughter’s first ever holiday abroad when they heard their flight had been overbooked.

Less than an hour later, the mother of one received a text from TUI announcing that their whole package holiday had also been cancelled.

Autumn ‘broke down sobbing’ once she heard the news.

Her Disney bag packed, Autumn, five, was beaming, left, at Manchester airport ready for her first foreign holiday. But her smiles turned to tears, right, after the trip to Turkey with her mum was cancelled after their flight was axed.

Ms McManus said: ‘We had to get there early because of traffic issues, and then the flight was delayed by about five hours.

‘We were all queuing up to get on the plane when they came around to everybody and said that the flight had been overbooked by 13 people.

‘Six people hadn’t shown up so they were now seven people too many. They were asking people to volunteer to not fly but without the guarantee of another flight at all in the next week.

‘Nobody was going to take that so we waited for another hour and then they came over the tannoy and said that the cabin crew have now gone over their allotted hours and therefore the flight would now be cancelled.

‘I was so shocked. It’s my first holiday in seven years and it’s my little girl’s first holiday ever. She just broke down sobbing, saying ”please mummy please you said there was only one more sleep”. She was just absolutely devastated.’

Tui said: ‘We would like to apologise for the inconvenience to our customers on flight TOM856 from Manchester to Antalya, on Friday 27th May who were delayed due to a combination of factors causing significant operational disruption.

‘Unfortunately, we felt the impact to customers’ holiday was too great and took the difficult decision to cancel the flight. We contacted affected customers as soon as we became aware of the change and all customers will receive a full refund within 14 days.

‘We understand how disappointing and frustrating this is and we apologise for any inconvenience caused.’

Student Isabelle Gray, 27, told the Evening Standard that checking in at Gatwick today was ‘hell on wheels’.

She said: ‘I arrived here just after 5am and queued for almost 2 hours to check my bag in, the queue was about 500 deep and there was one person at the check in desk. Some people next to me were thinking of putting their suitcase in a locker and running to the gate with just hand luggage.’

Airlines and airports have been blamed for the carnage having slashed staff during the pandemic while hoovering up furlough payments and state aid. Now they do not have enough workers to cope – and cannot find people to fill often low-paid vacancies – as the numbers booking foreign holidays over the Platinum Jubilee week and through the summer months hit pre-pandemic levels.

No airport or @TUIUK staff on hand, the police read out a statement on their behalf. From this point it took another 2 hrs to get our bags back as we were left stranded in baggage reclaim with no staff to advise us what was happening 2/3 pic.twitter.com/idn9uG5X49

It was police, not TUI staff, who were sent in to tell weary passengers at Manchester Airport that their entire holiday to Greece was cancelled and they had to leave

Meanwhile, Jayesh Patel, whose half term break to Kos had been two years in the planning, said there was anger and tears at Manchester Airport as two policemen arrived to read a statement from TUI, moments after they began receiving texts telling them their flight and package breaks would not go ahead.

He told the BBC today: ‘The airport was understaffed, a lot of the outlets had ran out of food or closed at 6pm. We got called to the gate for the 7pm take off – four hours late. There was no staff.

‘People were very upset – some were going on their honeymoon. And then we all started getting texts that the flight was now cancelled and because it was a package booking the whole holiday was cancelled’.

He added: ‘The worst part that there was no Tui staff to help. And then two police officers arrived and read a statement telling us how we would exit the airport.

‘Because the airplane hadn’t arrived from anywhere, our flight wasn’t listed at any of the baggage carousels so we didn’t know where to wait – people were visibly upset and children were crying.

‘We then had to wait another couple of hours and at this point, we’d spent the whole day at the airport and just wanted to leave.’

Meanwhile, the Saunders family were left devastated after their first holiday since the Covid pandemic was cancelled by TUI as they waited to board their flight.

Another family was left devastated after their first holiday since the Covid pandemic was cancelled by TUI as they waited to board their flight. Anna Saunders, pictured with her husband Matthew, and kids Eva and Jack