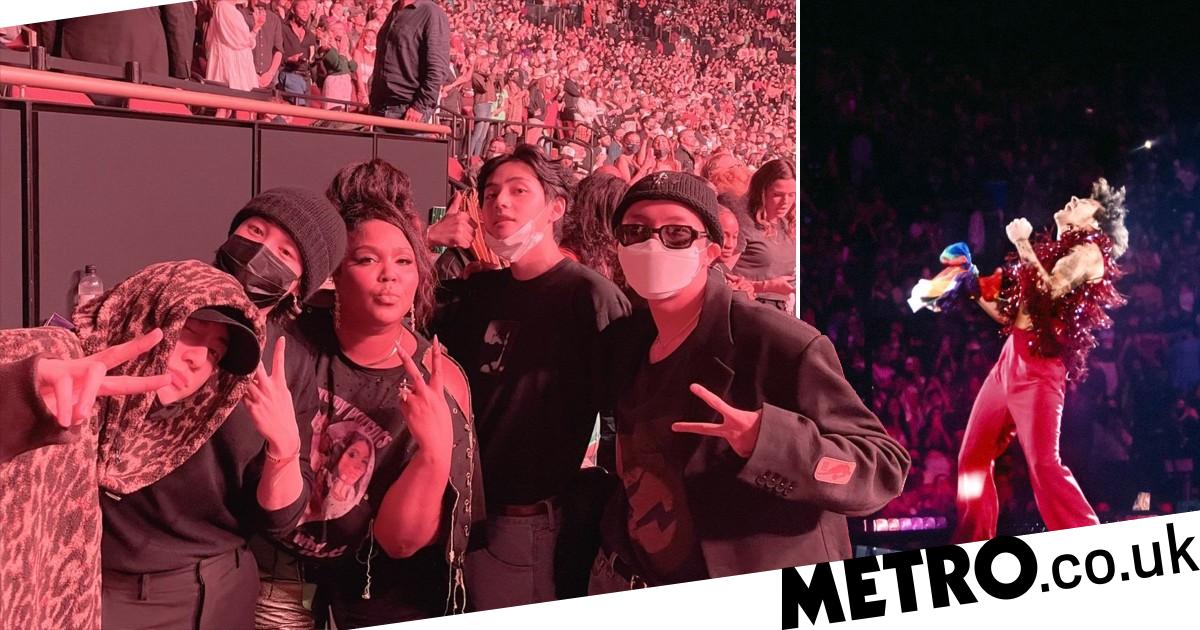 BTS members have been spotted hanging out with Lizzo at Harry Styles’ recent gig, and fans simply can’t get enough of the crossover.

That’s right; a gang of the biggest stars in music hung out together while enjoying all Harry Styles’ hits at his recent concert in LA.

BTS’s V, Jungkook, Jimin, and J-Hope (aka Hobi) were there with pop queen Lizzo grooving and snapping photos together as Harry was performing at his Love On Tour concert on November 19.

‘We met Lizzo,’ the band tweeted, uploading a selection of snaps from the night, face masks in tow amid the ongoing coronavirus pandemic, with Lizzo doing the same.

And BTS weren’t the only ones sharing photos – many fans uploaded videos where some of the BTS members were spotted with Lizzo.

One fan wrote on Twitter, ‘This KIM TAEHYUNG will forever live in my mind rent-free!’ while another wrote: ‘I hope they had fun!! And it was great to see interactions again between them.’

The Rumors singer has made it known she is a major BTS stan. She once performed a cover of their hit track Butter and was seen wearing a top that read: VMIN – an ode to the friendship pairing between Jimin and V.

And of course, BTS are longtime Harry fans; the Korean group has made known their love of the former One Direction star before.

Just last year, they chose Watermelon Sugar as the last song they had stuck in their heads during an interview with SiriusXM’s Hits 1, and this year they released a cover of Harry Styles’ Falling performed by Jungkook, which racked up millions of YouTube views in just a few hours.

Harry’s concert had a star-filled attendance, as concert-goers claimed that they also spotted Ariana Grande, Selena Gomez, Billie Eilish and SZA at the gig as well.

Lizzo was recently spotted out celebrating Rumors’ chart debut in the US, and stars came out in support of her after she took to Instagram to reveal she had been subjected to ‘fatphobic and racist’ abuse from people over the single.

The singer, real name Melissa Jefferson, broke down in tears on her livestream and explained that her ‘tolerance was lower’ and she was ‘more sensitive’ when ‘working this hard’.

‘I’m seeing negativity directed towards me in the most weirdest way. People say s**t about me that just doesn’t even make sense.’

‘It’s fatphobic, it’s racist and it’s hurtful. If you don’t like my music, cool, if you don’t like Rumors it’s all cool, but a lot of people don’t like me because of the way I look and I’m like… Anyway I’m just having one of those days where I don’t have no time. I think I’m just overwhelmed.’

A number of celebrities rushed to Lizzo’s defence, including collaborator Cardi B, as well as Jameela Jamil, Chloe Bailey and Missy Elliott.


MORE : Lizzo wants Marvel cameo in a Captain America PSA after Eternals nod and we must all manifest this for her

MORE : Harry Styles helps fan come out as gay to mum on stage in purest moment ever