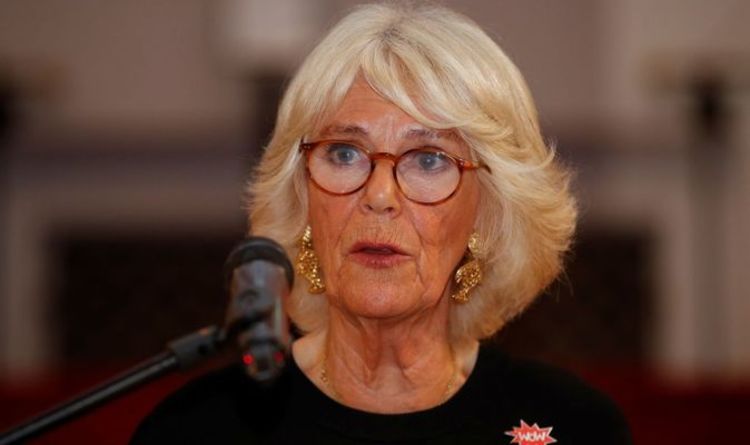 The Duchess of Cornwall has been praised for delivering a speech that has “a lot of resonance” in society, as she took to the stage to speak out against sexual violence towards women. A royal expert noted that since 2016, Camilla has been “powerfully working behind the scenes” to tackle sexual abuse, and has a number of patronages dedicated to improving women’s safety. Since joining the Royal Family in 2005, the 74-year-old Duchess has become a Patron or President to over 100 organisations.

On October 27, the Duchess of Cornwall gave a speech at the Shameless! Festival where she warned of a culture normalising violence against women.

Speaking of her appearance, royal expert Rebecca English said: “I know I’ve mentioned on this programme before but it’s probably worth mentioning again, that in 2016 I went with her to a visit with a charity called Safe Lives, where she wept and had tears rolling down her cheeks as a result of hearing the stories from families and friends of women who’d lost their lives to gender-based violence.

“She turned to me and said ‘I want to do something about this, I don’t know what’, and she’s spent the last five years really quietly but powerfully working behind the scenes.

“I think that speech was the pinnacle of that, and I would describe it as the speech of her royal career.

“She spoke very, very passionately, made the point of how many women we’d lost this year and how could this continue, she made a point of saying – very strong words to have to say as a royal – that while men aren’t born rapists, they are constructed.

“It’s about the men in our lives getting involved in this as well, and I think this is going to have a lot of resonance for people for some time to come.”

Speaking in front of an audience that included Carrie Johnson, Camilla called for the names of victims of sexual violence to “never be forgotten”.

She also said that she hoped the Shameless! Festival – a collaboration between the Women of the World Foundation, of which she is president, and Birkbeck, University of London’s SHaME (Sexual Harms and Medical Encounters) project – would help bring an end to this violence.

She said:  “Together, today, let us resolve to support survivors to be ‘shameless’ and not to take on misplaced feelings of stigma. Through speaking up about our experiences, we break the wall of silence that allows perpetrators to go unpunished; and increases the feeling of isolation that so many survivors describe.

“Secondly, we need to get the men in our lives involved in this movement. We do not, in any way, hold all men responsible for sexual violence. But we do need them all on board to tackle it. After all, rapists are not born, they are constructed.

“It takes an entire community – male and female – to dismantle the lies, words and actions that foster a culture in which sexual assault is seen as normal, and in which it shames the victim. So let us all leave here today and try and get the men in our lives to participate in building a ‘shameless’ society.”

Speaking of Everard’s murder, the Duchess said her mother’s victim impact statement, which was read out in court in front of her murderer Wayne Couzens, had been “searing”.

Camilla first became involved in supporting victims of domestic abuse and sexual violence in 2009, after she visited nine rape crisis centres, leading her to open a number of centres across London.

She has previously partnered with Boots to create a line of wash-bags for victims and last month, she was named as patron of the Mirabel Centre, Nigeria’s first sexual assault referral centre.

The Duchess is next expected at the COP26 summit in Glasgow, where she will accompany her husband Prince Charles, and the Duke and Duchess of Cambridge, as they greet world leaders at the important climate conference.