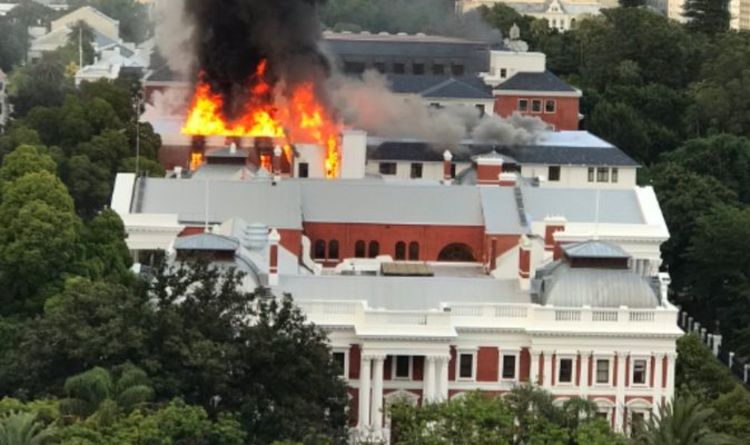 Images and videos shared on social media appear to show smoke and flames flowing from Parliament in Cape Town. Local reports indicate Cape Town Fire & Rescue services have confirmed there is a fire at the building.

Firefighters have been deployed and are reportedly at the scene.

The cause of the fire has not yet been confirmed.

The fire broke out as South Africans woke up on January 2.

Some footage, shared on Twitter as early as 6.45am local time, suggested Capetonians could see the blaze from far and wide.

One user even shared footage of the flames from Table Mountain, some five miles from the building.

Vicky Stark, a journalist based in Johannesburg, has since confirmed further details about the blaze.

She said on Twitter: “Fire on Parliament’s 3rd floor.

“Fire and Rescue’s Jermaine Carelse says they got a call at about 5am and they’re still battling the blaze.

“He says there are cracks in the walls, an indication of how intense the fire is.

“No deaths or injuries reported yet.”

She said: “Fire is currently on the 3rd floor – initial reports indicate it started in the office space and is spreading toward the gymnasium.

“The roof area has caught alight and the National Assembly building is on fire too.”

Ms Kohler Barnard added: “The fire has not been contained and reports of cracks in some walls of the building have been confirmed.”