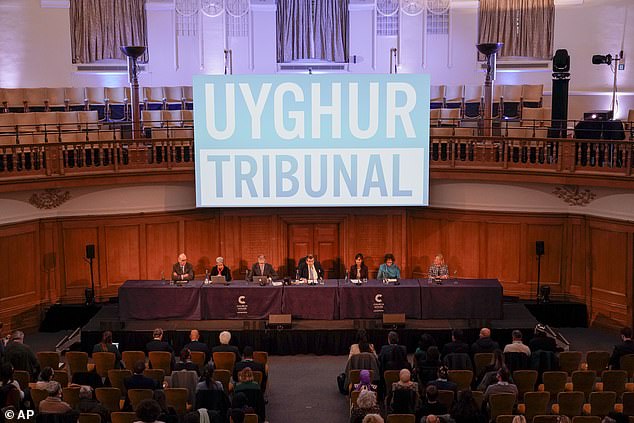 Hundreds of thousands, if not millions of people in Xinjiang have been incarcerated without any justification, the tribunal’s chair Sir Geoffrey Nice QC said on Thursday.

‘This vast apparatus of state repression could not exist if a plan was not authorised at the highest levels,’ he said as he delivered the tribunal’s findings.

The panel probing alleged human rights abuses – made up of nine lawyers and human rights experts – published their opinion after hearing allegations of torture, rape and inhumane treatment at two evidence sessions this year.

The panel said it was satisfied beyond reasonable doubt that torture of thousands of Uyghurs had occurred, and upheld claims of imprisonment, forced transfer, enforced disappearances, rape and sexual violence, persecution and inhumane acts.

It added that that China’s President Xi Jinping and other senior officials ‘bear primary responsibility’.

Beijing has dismissed the findings.

The tribunal was set up at the request of the World Uyghur Congress, the largest group representing exiled Uyghurs, which lobbies the international community to act against China over the alleged abuses.

In a 63-page report, the panel said there was no evidence of mass killing, which has been the traditional test of genocide under international law.

Although some Uyghurs had been killed in detention, Nice said comparisons with the Nazi holocaust were unhelpful.

But the panel said it was satisfied beyond reasonable doubt the Chinese Communist Party (CCP) ‘intended to destroy a significant part’ of the Muslim Uyghur minority in the country’s northwest and as such ‘has committed genocide’.

The CCP put in place ‘a comprehensive system of measures to ‘optimise’ the population in Xinjiang’ to reduce the Uyghur birth rate, including forced sterilisation, birth control and abortion.

Nice said China’s treatment of the group amounted under the Geneva conventions to an intent to destroy all or part of a group, physically or biologically. The judgement, he said, largely rested on the suppression of births.

Hundreds of thousands of Uyghurs have been thrown into forced reeducation camps, forcibly sterilized and had their families broken up in a Chinese crackdown on the minority, the report says. Pictured: Images of Uyghurs in a camp in China, released in 2017

‘The population of Uyghurs in future generations will be smaller than it would have been without these policies. This will result in a partial destruction of the Uyghurs,’ the report said.

‘In accordance with the Genocide Convention’s use of the word “destroy” this satisfies a prohibited act required for the proof of genocide.’

Nice said that those that were detained by China were largely released after indoctrination. This was part of a central government plan, ordered by the most senior of officials, to reintegrate Xinjang province and break up Uyghur culture.

‘Hundreds of thousands of Uyghurs – with some estimates well in excess of a million – have been detained by PRC [People’s Republic of China] authorities without any, or any remotely sufficient reason, and subjected to acts of unconscionable cruelty, depravity and inhumanity,’ the tribunal’s report says.

Some, the report says, sustained extreme sexual violence – including gang rapes and penetration with electric shock rods and iron bars. It also says women were raped by men paying to be allowed into the camp for that purpose.

China has slapped sanctions on tribunal chair Sir Geoffrey Nice QC, who prosecuted the former Serbian leader Slobodan Milosevic for war crimes at the UN tribunal in The Hague. Pictured: Nice attends a press conference after delivering the verdict of the independent tribunal assessing evidence on China’s alleged rights abuses against the Uyghur people, in London, Thursday, Dec. 9, 2021

Beijing – which offered no cooperation to the tribunal – dismissed its findings, and said the congress ‘paid for liars, bought rumours and gave false testimony in an attempt to concoct a political tool to smear China’. Pictured: China’s president Xi Jinping on December 3

The tribunal found evidence of enforce abortions, removal of wombs from women against their will, killing of babies immediately after they were born, and mass enforced sterilisation through the use of IUD devices only removable by surgery.

Furthermore, hundreds of thousands of children have been taken from their families and put into boarding schools, mosques have been destroyed, religious practices have been banned, and burial grounds have been bulldozed or built over, it says.

The report also says that there is evidence that some Uyghur were confined in containers up to their necks in cold water, shackled by metal chains, and immobilised for months on end.

It also reported the intrusiveness of the Chinese state, pointing to mass coerced labour and intensive monitoring and facial surveillance. This, the report says, means parts of Xinjiang have become a sort of open prison.

Nice said the tribunal would not have been necessary if an international court had been asked by governments, fearful of Beijing retaliation, to investigate.

He added there was an obligation to know the truth about the suffering of fellow humans, and breaches of international human law.

Beijing – which offered no cooperation to the tribunal – dismissed its findings, and said the congress ‘paid for liars, bought rumours and gave false testimony in an attempt to concoct a political tool to smear China’.

Hundreds of thousands, if not millions of people have been incarcerated in camps (pictured) without any justification, the tribunal’s chair Sir Geoffrey Nice QC said on Thursday

‘This so-called tribunal has neither any legal qualifications or any credibility,’ the foreign ministry said, calling the hearings ‘a political farce’.

China has slapped sanctions on Nice, who prosecuted the former Serbian leader Slobodan Milosevic for war crimes at the UN tribunal in The Hague.

He and the other members acknowledged that testimony came from people opposed to the People’s Republic of China (PRC) and the CCP.

But they also examined thousands of pages of documentary evidence from independent researchers and human rights organisations.

The panel concluded that hundreds of thousands of Uyghurs, and possibly more than one million, had been detained without cause, and treated cruelly and inhumanely.

It said it was satisfied beyond reasonable doubt that torture had occurred ‘by or at the instigation of, or with the consent or acquiescence of, public officials or other persons acting in official capacities of the PRC and/or CCP’.

It upheld claims of imprisonment, forced transfer, enforced disappearances, rape and sexual violence, persecution and inhumane acts to the same standard of proof.

‘The tribunal is satisfied that a comprehensive plan for the enactment of multiple but interlinked policies targeting the Uyghurs had been formulated by the PRC,’ it added, saying President Xi Jinping and other senior officials ‘bear primary responsibility’.

The plight of the Uyghurs has contributed to worsening diplomatic relations between Western powers and Beijing, which denies any abuses.

People belonging to the Chinese Uyghur Moslem minority protest in Urumqi, China, in 2009

The United States has called China’s treatment of the Uyghurs genocide, and is mounting a diplomatic boycott of the upcoming Winter Olympics in Beijing with several other Western nations.

Prime Minister Boris Johnson on Wednesday said Britain would join the boycott, in a move likely to fray ties further after London’s repeated criticism of what it sees as creeping Chinese authoritarianism in Hong Kong.

But the British government has resisted calls for it to declare China’s treatment of the Uyghurs as genocide, insisting it should be a matter for a court to decide.

The Uyghur Tribunal has no powers of sanction or enforcement and says it is for states and other bodies to consider its conclusions and decide whether to act on them.

The findings come after China warned the UK, US, Canada and Australia they will ‘pay the price’ for a diplomatic boycott of the 2022 Beijing Winter Olympics.

Washington announced its boycott earlier in the week, saying it was prompted by widespread rights abuses by China and what it sees as a ‘genocide’ against the Muslim Uyghur minority in Xinjiang.

China has warned the UK, US, Canada and Australia they will ‘pay the price’ for a diplomatic boycott of the 2022 Beijing Winter Olympics (pictured, the Games’ logo at Shougang Park in Beijing)

The UK, Australia and Canada followed suit in a flurry of diplomatic bonhomie on Wednesday. The boycott stopped short of not sending athletes but nonetheless infuriated Beijing, which hinted at retaliation on Thursday.

‘The US, Australia, Britain and Canada’s use of the Olympic platform for political manipulation is unpopular and self-isolating, and they will inevitably pay the price for their wrongdoing,’ foreign ministry spokesman Wang Wenbin told reporters.

The veiled threat came as France said it would not boycott the February Games because ‘sports is a world in itself, which must be protected from political interference.’

The Kremlin, however, criticised the US move, saying the 2022 games should be ‘free of politics’. Russian President Vladimir Putin has already accepted an invitation by Chinese leader Xi Jinping to attend.

Meanwhile International Olympic Committee president Thomas Bach said on Wednesday that he was staying politically neutral on the matter, while insisting the important point was ‘the participation of the athletes in the Olympic Games’.