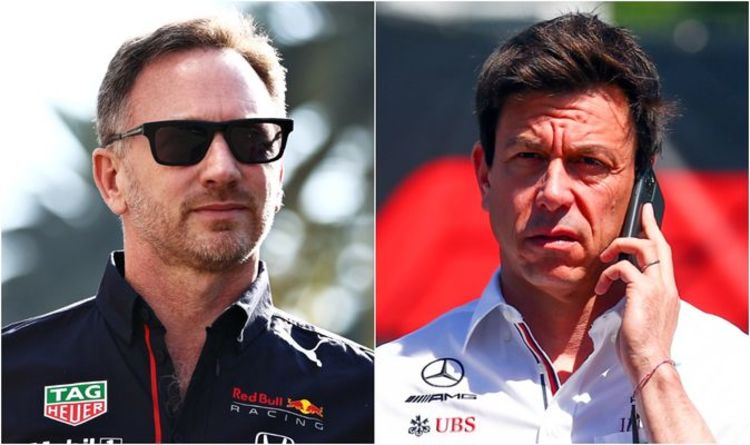 Red Bull boss Christian Horner has fired shots at his Mercedes counterpart, Toto Wolff, as controversies stemming from the Brazilian Grand Prix spill over into Qatar. On Friday, it was Red Bull who emerged victorious after the Silver Arrows’ appeal regarding Max Verstappen’s lap-48 antics in Sao Paulo was rejected.

Even though Horner came out swinging on Friday, it was Mercedes who left Brazil the happiest after a dramatic weekend of racing.

A five-place grid penalty, a post-race fine and disqualification from Friday qualifying did not stop Hamilton from winning, while Valtteri Bottas took up the final place on the podium behind Verstappen.

When things did not seem to be going their way, Mercedes still managed to build a lead in the Constructors’ standings and Hamilton managed to close the gap on the Dutchman.

The emotion was clear to see from Wolff, particularly when he pointed angrily down the camera after the Brit’s race-winning overtake during the closing stages of the race.

If that was not enough, Wolff delivered the emphatic message: “F*** them all,” on the Hamilton team radio after his heroic Saturday sprint performance.

Despite Red Bull losing ground, Horner clearly found positives in the recent actions of Wolff in the rival garage.

“We want it to be dealt with on the circuit, not in the stewards’ room. We want a fair, clean fight across these last three races,” insisted Horner to Sky Sports.

“They [Mercedes] haven’t had this in seven years, that’s why Toto is getting twitchy, that’s why he’s swearing at the camera and throwing a few F-bombs around. We’ve got them under pressure.”

The Red Bull boss’ comments came after a tense press conference which followed Friday’s hearing on Verstappen’s conduct in Brazil.

On lap 48 of the race, he was seen to run both his and Hamilton’s cars off the track to prevent the seven-time world champion from overtaking.

Still, Hamilton used his startling straight-line speed advantage and made the decisive pass several laps later, something which has not gone unnoticed in the Red Bull garage.

With rear-wing controversies playing a pivotal role in Sao Paulo, they could yet do so in Qatar too.

“In our mind, they’ve obviously found a clever solution with their rear wing. It’s the FIA’s job to police it,” added Horner.

“We [protest] towards Mercedes and we get it back with interest the other way.

“There’s some very very clear evidence since Hungary, a big change in straight-line speed which has gradually been getting greater and greater.”