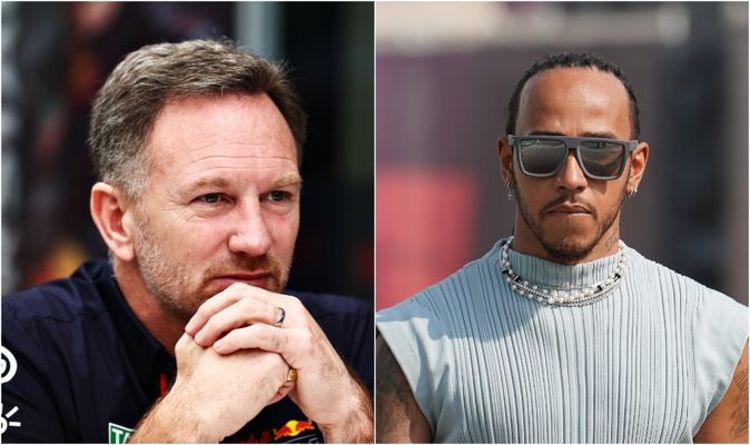 Red Bull boss Christian Horner has suggested that the row over Lewis Hamilton’s rear wing is far from over after a tense hearing in Qatar. The Brit enjoyed far superior straight-line speed last time out in Brazil, which helped him to fight back and claim a famous victory over title rival Max Verstappen.

Since a weekend of controversy died down, Mercedes opened the can of worms right back up again by appealing an incident which occurred on lap 48 of the race.

After several laps of wheel-to-wheel fighting for the lead, Verstappen appeared to run both cars wide in an effort to prevent Hamilton from passing.

When new on-board footage emerged later in the week, the Silver Arrows took the issue straight back to the FIA.

A hearing took place on Thursday, before the verdict was delivered on Friday which ultimately denied Mercedes’ right of review.

As Horner and his Mercedes counterpart, Toto Wolff, locked horns during a tense press conference afterwards, attention then turned towards what Red Bull will do about the issue of Hamilton’s rear wing.

“In our mind, they’ve obviously found a clever solution with their rear wing,” stated Horner to Sky Sports.

“It’s the FIA’s job to police it. We [protest] towards Mercedes and we get it back with interest the other way.

“There’s some very, very clear evidence since Hungary, a big change in straight-line speed which has gradually been getting greater and greater.

“What you had in Brazil was Lewis in a vastly superior car straight-line speed wise, and Max hanging on.

“The fact that he hung on for 58 laps, nobody else could hang on for more than three against Lewis.”

Even so, Verstappen’s tenacity in Sao Paulo was not enough to claim victory, and Hamilton pounced on the opportunity to narrow the gap at the top of the drivers’ standings.

Now separated by just 14 points, Qatar is set to host another close-fought battle with huge consequences either way.

While Horner’s comments suggest the issue of Hamilton’s rear wing will not be left alone, his view on how he would like the remainder of the season to play out is clear.

“We want it to be dealt with on the circuit, not in the stewards’ room,” he added.

“We want a fair, clean fight across these last three races.”