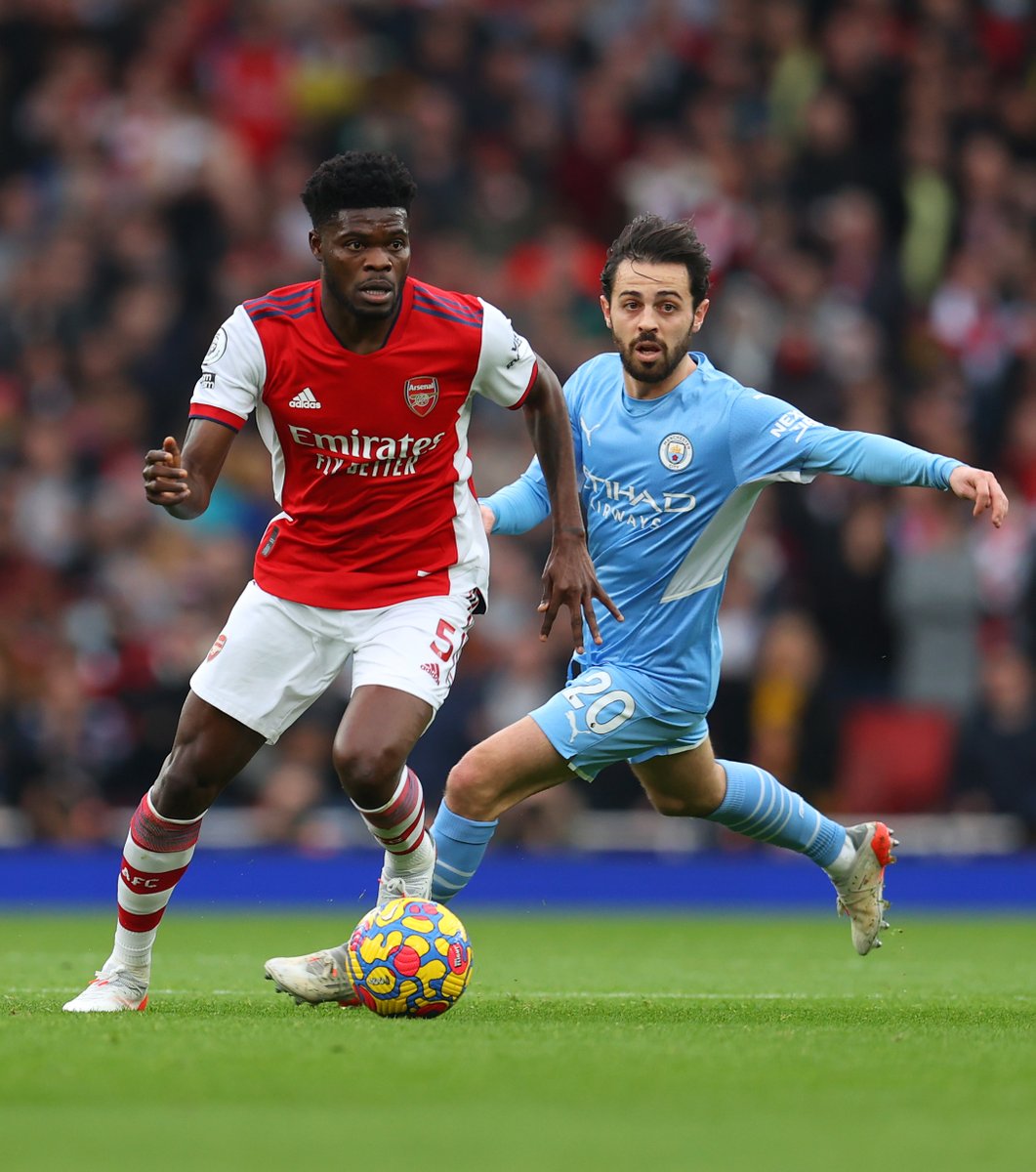 Two controversial VAR penalty decisions and an unnecessary red card for Gabriel marred a terrific performance from Thomas Partey and his Arsenal side as they fell to an injury-time winner as Manchester City made it 11 wins on the trot in a pulsating New Years Day EPL fixture.

Arsenal, who came into the game off the back of 4 consecutive wins produced a terrific first-half performance against the league leaders helped in no part by a season’s best performance from Thomas Partey and an electric display from Gabriel Martinelli befitting of his Brazilian origins. One can not also forget the English starlet in Bukayo Saka who finished off a sweeping Arsenal move to put the hosts ahead 31 minutes; nothing short of what they deserved.

However, it was the midfield man Partey that set the foundations for that first-half performance continually extinguishing the threat of Man City with multiple recoveries and then re-distributing to those creative forces in front of him. Under Mikael Arteta, the Ghanian now seems to be justifying his £45m transfer fee and on this form, will be sorely missed by Arsenal whilst on duty in the upcoming Africa Cup of Nations.

One thing that Arsenal could have definitely done without yesterday is the inconsistent use of VAR which saw two penalty decisions ultimately go against them.

In the first half, with the score at 0-0, there were cries of a penalty for Arsenal as Thomas Ødegaard appeared to be tripped by keeper Ederson. With referee Stuart Attwell deeming that Ederson took the ball before man but the slow-motion replays possibly showing something different, it came as a big surprise to the majority of the sixty thousand fans packed into the Emirates when Attwell was not invited to go and review the decision at the VAR monitor and instead told to stick with his original decision.

Arsenal felt aggrieved for a second time in the second half when, after Bernardo Silva went to ground in too easily in the eyes of Attwell after tip-toeing past Granit Xhaka in the penalty area, on this occasion the Stockley Park entourage invited the referee to review the decision pitch-side which ultimately led to the award of the penalty which Mahrez expertly stuck away to level up the scores, 1-1.

Madness Made in Brazil

What ensued in the following five minutes was nothing short of madness and encapsulated the pure attraction of the Premier League. First up, in the aftermath of the penalty decision, Arsenal defender Gabriel took it upon himself to scuff up the penalty spot before Mahrez had a chance to place the ball which rightly saw the Brazilian booked.

Following the equalizer, Arsenal attacked instantaneously, and after a mix-up from Laporte saw his back pass header float over the despairing Ederson, fellow defender Nathan Ake produced a brilliant goal-line clearance just before the ball crossed the line which fell at the feet of Arsenal’s Martinelli only for the young Brazilian to skew his shot off the outside of the post with the goal at his mercy.

As if that wasn’t enough drama, from the resulting goal-kick Arsenal’s Gabriel clumsily body-checked Man City’s and fellow Brazilian Gabriel Jesus on the halfway line leaving Stuart Attwell with no choice but to brandish a second yellow to Gabriel and reducing Arsenal down to ten men.

The sending off in the 58th minute meant Arsenal had to slightly change their approach for the remaining part of the game but even with 10 men, they still looked comfortable to at least get a point up until the third minute of added time when a hopeful cross from City’s right was poked home by Rhodri to simultaneously break the hearts of Gooners and spark wild celebrations in the away end and from the City players.

In the end, a huge 3 points for second-best City who now sit 11 points clear of second-place Chelsea who play third-placed Liverpool later today. For Arsenal, despite the defeat, big positives can be taken as they look to be on the right path under the imprint of Mikael Arteta and are starting to prove they can mix it with the Premier League’s elite.