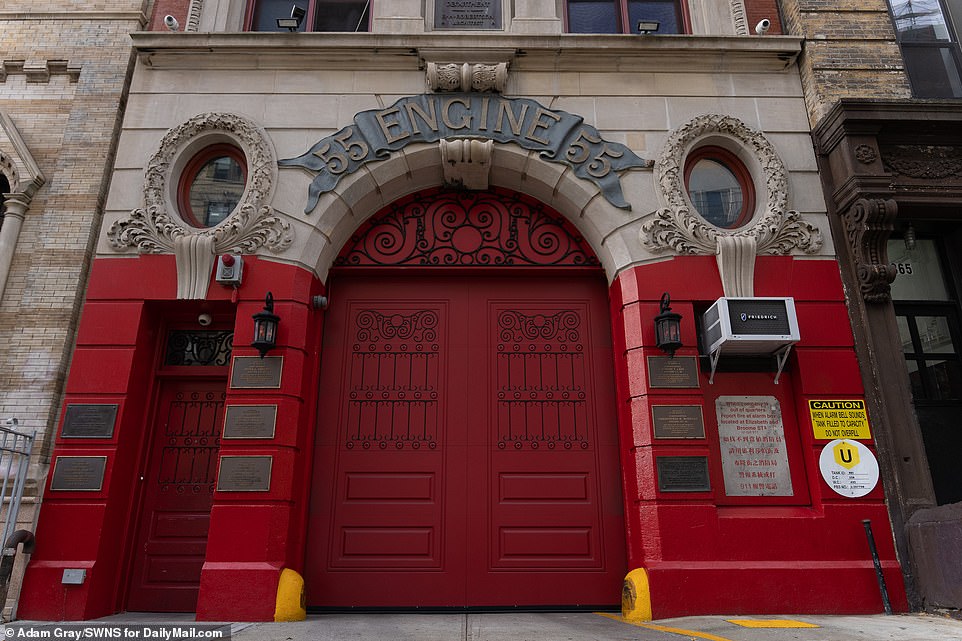 New York City Mayor Bill de Blasio accused police and firefighter unions of lying about staff shortages caused by his COVID-19 vaccine mandate that took effect on Monday as unvaccinated firefighters across the city were sent home and cops rushed to fill out medical and religious exemptions in order to continue working without getting the shot.

More than 9,000 city workers have already opted not to obey de Blasio’s vaccine mandate and will take unpaid leave starting from today – the deadline to get the shot.

It’s unclear how many of those who have already taken unpaid leave are cops, firefighters or EMTs but 5,500 cops remain unvaccinated, along with 2,518 firefighters, 794 EMTs and 1,649 Department of Sanitation workers. Some 2,300 firefighters have called out sick in order to keep their paycheck without declaring that they are unvaccinated.

Seventy-four NYPD workers – 34 cops and 40 civilian employees – have taken unpaid leave. More than 6,500 of  the 8,000 unvaccinated NYPD staff are planning to file exemptions with the encouragement of Commissioner Dermot Shea and the unions, to allow them to continue working.

Firefighters in Brooklyn, the Bronx and Staten Island showed up to work on Monday and were sent home because they are unvaccinated. Others chose to retire before the mandate came into effect.

The FDNY will not confirm exactly how many were sent home, but unions shared details of at least nine in Brooklyn, one firefighter in the Lower East Side and one in the Bronx.

Fire captains told DailyMail.com on Monday that they are hopeful tomorrow’s city elections will yield new officials who will quickly reverse the mandates and allow them to ‘get on with their jobs’.

FDNY Engine 55 in lower Manhattan was one of the firehouses that union bosses say were down this weekend due to staff shortages. 2,300 firefighters have called out sick in New York City to avoid having to report that they are unvaccinated and lose their pay. In total, more than 3,000 firefighters remain unvaccinated and as of today, cannot work

Firefighters are seen outside of Ladder 18 / Engine 15, 25 Pitt Street, where a ladder is out of service due to vaccine mandate related reduced manpower. Captain Charles Saladis told DailyMail.com that he was down several firefighters because of the sick-outs, and that the firefighters want to be given the choice to either get vaccinated or undergo weekly COVID testing

Twenty six fire stations were down this weekend – around 10 percent of the city’s total – due to a lack of staffing a and ‘dozens’ more were expected to be closed today as the mandate took hold, according to the president of the Uniformed Association of Firefighters, one of the city’s biggest firefighter unions.

FDNY Commissioner Dan Nigro admitted at a briefing with de Blasio that 18 units were down on Monday, and many more were understaffed.  But de Blasio, whose term ends on December 31, claimed the unions were lying to ‘make people worried’ and that while there are shortages, they aren’t a catastrophic.

In total, 9,000 city workers have already opted to go on unpaid leave rather than get the vaccine. There are others who have called out sick so they can continue claiming a pay check. These are the total numbers for unvaccinated city workers as of Monday morning

‘In the last 48 hours there’s been a lot of misinformation out there, a lot of reports fire houses closed when they weren’t, a lot of hearsay honestly. The factual answer is going to come from City Hall. There’s a lot of rumor mill and in fact it’s being done by certain unions to try  and make people worried,’ he said.

It was a different story on the ground at firehouses across the city and among police bosses who warned that any loss of staff could prove fatal for New Yorkers.

Captain Charles Saladis of Ladder 18 in Manhattan’s Lower East Side told DailyMail.com on Monday that both he and his colleagues from Ladder 11 were short staffed.

‘Hopefully it will end soon – we want to be back in service. I don’t think it’s great for us or the public.’

He said his unit preferred when they could choose either to be vaccinated or test weekly for COVID.

‘We love our jobs, we just want to do them.

‘Just last month, we were such heroes and so essential to the city,’ he said, referring to the 20th anniversary of 9/11.

‘That’s New York… what have you done for me lately?’ he said.

Others showed up for work but were sent home, including one female firefighter from the Bronx’s Engine 38, and an entire crew from Engine 243 in Brooklyn.

One firefighter from Engine 15 in the Lower East Side showed up thinking he had been granted a religious exemption, only to be told it hadn’t come through and he now won’t be paid.

Last week, five police unions warned that the city was ‘completely unprepared’ for the shortage of 5,500 cops.

De Blasio is doubling down on the mandate, telling firefighters and cops they’ve had long enough to consider being vaccinated.

A firefighter loads oxygen canisters outside of Ladder 18 / Engine 15, 25 Pitt Street, where a ladder is out of service due to vaccine mandate related reduced manpower. Manhattan, New York. November 01 2021

Fire vehicles outside of Ladder 18 / Engine 15, 25 Pitt Street, where a ladder is out of service due to vaccine mandate related reduced manpower

Nine firefighters from Brooklyn showed up to work on Monday but all were sent home because they are unvaccinated. Now, the firehouse is closed, according to the union

‘It’s been quite clear this was the direction we were going in and it’s the right thing to do. I would argue people had plenty of evidence to make a decision on.

‘Protect their careers doing incredible work – it’s time for people to come in and get vaccinated.

‘It’s time to get back to work,’ he said at his briefing on Monday.

Just last month, we were such heroes and so essential to the city…hopefully it will end soon – we want to be back in service. I don’t think it’s great for us or the public

Earlier this weekend, FDNY Commissioner Nigro lambasted those who had called out sick to avoid missing out on pay.

‘Irresponsible bogus sick leave by some of our members is creating a danger for New Yorkers and their fellow Firefighters.

‘They need to return to work or risk the consequences of their actions.’

The firefighters and cops say they were not given enough time to make ‘life and career changing decision’.

De Blasio told them on October 20 that they would lose pay starting November 1. FDNY union bosses on Monday morning said that some firefighters had chosen to retire early rather than be forced into getting the shot.

‘This is the moment we’ve been waiting for. We’re not clear how many fire companies will be closed today, we expect dozens.

A group of sanitation workers protest outside a Department of Sanitation building on Monday as the mandate took hold. More than 1,500 remained unvaccinated on Monday

The sanitation workers are responsible for keeping the city’s streets clean and removing trash. 1,500 are now out of work as a result of the vaccine mandate

‘We’re here today because of a mandate that was put on members with nine days to make a life changing decision,’ Uniformed Firefighters Association’s Andrew Ansbro said at a press conference on Monday morning.

Many have filed for exemptions, according to de Blasio and fire and police chiefs.

But those who are refusing out of choice say they feel like they’re being treated coldly by the city they have worked for decades to protect.

‘Heroes last year, fired this year, ‘ was how one union referred to the mandate on Monday.

Among them are 5,500 NYPD officers, 3,560 firefighters and EMTs, and 1,620 workers from the Department of Sanitation, whose absence on the city’s increasingly violent streets will be felt most sorely.

Outgoing NYC Mayor Bill de Blasio said on Monday morning, as his deadline took hold, that police and fire unions were lying about the shortages to ‘make people worried’

There are growing fears over how those shortages will play out in 911 response times, officer man-power, EMT and ambulance capabilities and street cleaning.

‘With less than 48 hours until Mayor de Blasio’s arbitrary vaccination deadline for city workers – and following a state judge’s refusal to pause the deadline despite the mandate’s chaotic rollout – police union leaders are warning New Yorkers that the NYPD brass is completely unprepared for the staffing shortage that will result from the mandate’s haphazard implementation,’ the joint letter said.

Pat Lynch, President of the Police Benevolent Association in New York City, said: ‘NYC cannot afford to have a police department that is weak, disorganized and totally dominated by the irrational whims of City Hall. Unfortunately that’s what the NYPD has become.

Rep. Nicole Malliotakis, a Congress member for the borough’s of Brooklyn and Staten Island said accused the Mayor’s Office of misleading the public by saying that no ‘firehouses’ were closed while failing to add that ‘many are operating at half capacity due to offline companies.’

‘Now cops and New Yorkers are all wondering: what exactly will happen when the vaccine deadline strikes?’

On Sunday, he claimed the number of workers who have yet to show proof of vaccination is inflated because their exemption requests are still being processed.

‘The vast majority of City workers, 91%, stepped up to put the health and safety of their city first and got vaccinated,’ de Blasio tweeted.

Rep. Nicole Malliotakis, a Congress member for the borough’s of Brooklyn and Staten Island said accused the Mayor’s Office of misleading the public by saying that no ‘firehouses’ were closed while failing to add that ‘many are operating at half capacity due to offline companies.’

Sergeant Juan C. Swystun, a fire chief in Queens, issued this call over the weekend looking for volunteers to plug staffing gaps

The Fire Department said fire companies — groups of firefighters composed of specialized teams — open and close regularly but might face more closures than usual. The FDNY was prepared to shut down 20 percent of them while deploying private emergency medical response services to help out

The fire department has said it was prepared to close up to 20% of its fire companies and have 20% fewer ambulances in service while also changing schedules, canceling vacations and turning to outside EMS providers to make up for expected staffing shortages.

On Sunday, a message was sent through email as nearly 350 potential volunteer firefighters were tagged.

‘Good morning all,’ the email read. ‘We need to start identifying members of the service who are active volunteer firemen in both Long Island and Upstate counties in anticipation of the impending shortage for the FDNY due to COVID-19 vaccine mandates.

‘On a voluntary only basis operations is looking to have qualified members on standby to backfill firehouses if necessary.

COVID deaths in New York City are down across the board. On average, one unvaccinated person a week dies from COVID and the numbers are even less citywide and among the vaccinated

De Blasio said the sanitation department will move to 12-hour shifts, as opposed to the usual 8-hour shifts, and begin working Sundays to ensure trash doesn’t pile up.

Vaccination rates for the city’s fire and sanitation departments jumped significantly on Friday as workers rushed to meet the deadline for the mandate and an extra incentive: Workers who got a shot by Friday will receive $500.

Last week, hundreds of city workers took to the streets to protest. A rally was held outsider of the mayor’s official residence at Gracie Mansion.

In protest of the mandate hundreds of New York City firefighters took sick leave on Friday instead of complying with De Blasio’s deadline for all city workers to be vaccinated or be placed on unpaid leave.

Announcing the mandate, Mayor de Blasio issued an ultimatum requiring workers to get at least one COVID shot by 9am Monday morning or be furloughed and be sent home.

Meanwhile, nationwide Covid-related infections and fatalities in the US have dropped to the lowest levels recorded since April 2021.