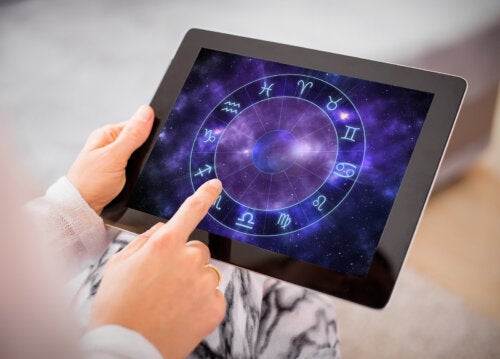 The Forer effect invites us to think about the danger of seeking to reconfirm what we believe without considering empirical data. What does it consist of? How does it work? Find out here!

“It’s just as I read it in the horoscope: I was going to have a family conflict this week and you see, that’s where I am now.” “My personality is just like the test I took”. These are some of the phrases we often hear: myth or reality, what is behind horoscopes? One of the effects that is triggered is the so-called Forer effect.

This is a psychological phenomenon that causes people to accept as their own certain generalizations that can be applied to any individual. It is also known as the “personal validation fallacy” or the “Barnum effect”. Below, we detail what it consists of and what its characteristics are.

How does the Forer effect work?

The so-called Forer effect comes from an experiment carried out by the psychologist Bertram Forer with his students. He gave his students a sheet of paper with a series of questions, through which he would evaluate their personality.

Once answered, he returned the results to them, since they were unaware of what the students had completed. The conclusions were all the same and included statements such as the following:

Forer then asked them to rate their agreement with that reading and assigned a score; 5 was the highest score for agreeing with the statement and 1 was the score reflecting absolute disagreement. Overall, the average obtained after collecting all the evidence was 4.26.

The surprise was when Forer pointed out to his students that these were descriptions obtained from an astrology section of a newspaper, confirming that people often identify with statements that are general and ambiguous enough.

Characteristics of the Forer Effect

Many people believe in the Forer effect because it often presents possible situations and avoids absolute terms. For example, if in a personality description we read “you are goal-oriented, although sometimes you are discouraged by difficulties”, no one would dare to deny the opposite; most of us are.

That is, this effect is self-referential, so it makes individuals identify with what they read. It is also common because it is based on confirmation bias; people take cues from the environment that lead them to affirm or reinforce what they already believed or thought.

It is like always wearing the same glasses when interpreting a situation. It makes a lot of sense, especially when we think we love to be right or believe we are right. Another reason it works is because we have a hard time tolerating uncertainty.

We have a need to know what is going to happen and we seek a sense of control over the future. For this very reason, when something manages to help us, guide us and leave us with the feeling that we can “step on solid ground”, we choose to take it into account.

In this sense, it is also highlighted that people move based on desires, sometimes even more than on empirical data. We look for reasons that give “more body” to our hopes.

Along the same lines as the above, we have the need to give explanations to things that happen. Therefore, we arealso able to be satisfied with some answers.

Another decisive factor for this effect to operate has to do with the presence of positive aspects in the descriptions (we choose to believe in that which positions us favorably and reject that which does not) and the authority granted to the speaker.

We think you may also enjoy reading this article: Feng Shui and Aromatherapy to Balance the Energy of Your Home

Some clarifications on the Forer Effect

The Forer effect applies to everything that presents generalizations with which it is easy to identify. However, science should not be confused with pseudoscience , or research instruments, such as personality inventories or related tests, which have reliability and validity as their main attributes.

Like this article? You may also like to read: 10 Objects That Attract Bad Energy According to Feng Shui

Choosing what and when

This is not about demonizing horoscope reading or the use of palm reading. Each person can believe in what he or she wants. What is important is to know that beyond the tools we decide to use, we are the protagonists of our lives.

We are active beings with the ability to decide freely, to change our minds, to choose which path we want to walk. In this sense, we should not be satisfied with simplistic or taxing statements about ourselves, but try to know ourselves and know what resources to use and when.

Finally, going a little further, the Forer effect invites us to think about the potential danger of always seeking to confirm what we believe. This attitude-which is characterized by a certain hermeticism-can lead to cognitive distortions that lead us to overlook certain elements.

It also leads to a mental closure that is far from creativity, flexibility and tolerance. It can even lead to dangerous situations. In short, as the saying goes, “there is no worse blind person than the one who does not want to see”.