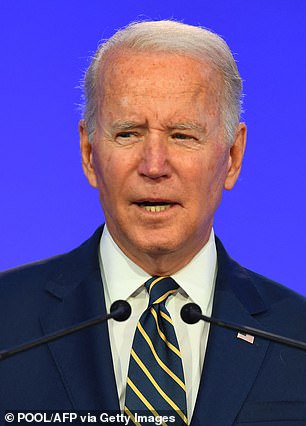 The Australian reported Monday on the existence of a 15-page document where the National Security Council, along with British and Australian officials, detailed how the world would learn about the new AUKUS pact.

The document, signed off by Biden’s advisers, said Australia would tell France on September 16 – the day AUKUS was announced – that it would be pulling out of the $90 billion submarine deal.

President Joe Biden (left) and French President Emmanuel Macron (right) met in Rome on Friday. There Biden told Macron: ‘I was under the impression that France had been informed long before that the deal was not going through’

Biden told French President Emmanuel Macron on Friday that he thought the French would be informed beforehand.

In Rome, before the opening of the G20 Leaders’ Summit, Biden went on a charm offensive to smooth over France’s ruffled feathers.

France had reacted to the deal by briefly recalling ambassadors from Australia and the U.S.

Biden apologized to Macron for any miscommunication.

‘I was under the impression that France had been informed long before that the deal was not going through, I honest to God did not know you had not been,’ the president added.

The documents obtained by The Australian indicate that NSC officials knew the French were to be told about the pull-out the day of the pact announcement – and predicted they’d be surprised and upset.

The paper reported that U.S. officials spent hours discussing with their counterparts in Canberra, Australia’s capital, how best to tend to France’s bruised feelings once AUKUS was official.

‘Everything was timed and understood completely,’ one Australian government source told The Australian. ‘We had a decision timeline that everyone had to hit on different marks. The announcement was made within the same news cycle because you can’t cancel the biggest procurement in our history and not have an answer to the question of what next? The sequencing was understood by everybody that that was the only way we could do it.’

The 15-page document’s existence raises questions about whether Biden’s advisers properly briefed him or if he misunderstood the plan.

The Biden administration’s explanation of what Biden knew when hasn’t been clear.

President Joe Biden (left) went on a charm offensive in Rome with French President Emmanuel Macron (right). ‘What we did was clumsy,’ he said. ‘It was not done with a lot of grace,’ he told the French leader

‘He asked me. He said, “What’s the situation?” And I explained exactly. He had not been aware of that,’ Kerry said.

When White House press secretary Jen Psaki was asked about Kerry’s comments she said, ‘I would encourage you to ask John Kerry specifically about the context of his comments.’

She had been asked by Fox’s Peter Doocy ‘why doesn’t he know about these things in real time?’

‘Of course he knew about the French being displeased,’ she said. ‘That’s certainly not what he was intending to convey.’

While Biden has made nice with Macron, Macron and Australian Prime Minister Scott Morrison have accused each other of being untruthful.

Morrison said he told Macron during their June meeting that the submarine deal would likely go bust.

In Rome, when Macron was asked if Morrison was lying, the French president replied, ‘I don’t think, I know.’

Biden, Macron and Morrison are all attending the COP26 climate summit currently in Glasgow, Scotland.