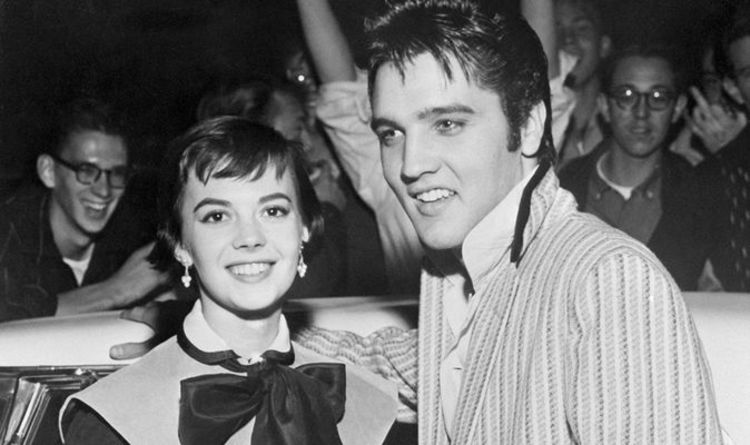 They were two of the hottest stars in the world in 1956. Elvis was already a major recording artist and was about to launch a film career with his debut in Love Me Tender. Natalie had already received her first Oscar nomination the year before for Rebel Without A Cause, alongside James Dean. Although The King was already developing a reputation for being a ladykiller, it was the teenage girl who pursued him and set up their first date.

Natalie asked her Rebel Without A Cause co-star Dennis Hopper to introduce her to the 21-year-old rock and roll star.

She told the San Francisco News: “I saw his picture in the paper before he got very popular and I liked his eyes. I thought then I just had to go out with him. He’s really great and the most totally real boy I’ve ever met. He’s a real pixie and has a wonderful little boy quality. He’s very courteous and polite and so sweet! He’s the nicest boy I know. A wonderful dancer – and he sings all the time to me. All the girls in the country are in love with him – so why should I be any different?”

Elvis dazzled the teenager by buying out an entire cinema on a date, something he would continue to do for the rest of his life.

READ MORE: Elvis’ girlfriend Linda new interview: Where The King is now and how he could ‘come back’

Natalie Wood with her Most Popular New Star award in1956 (Image: GETTY)

Love Me Tender was filmed in late summer 1956 and a besotted Natalie had two hand-made shirts sent to Elvis on-set. They were a matching pair, one in red velvet, one in dark blue velvet. The King can be seen wearing the latter in iconic images from his historic concert at the Mississippi-Alabama Fair and Dairy Show on September 26, 1956.

Ten years after leaving his hometown as a boy, Elvis had returned as a huge star and gave two concerts, wearing the blue shirt for the afternoon show and the red one in the evening. Natalie had Hollywood costume seamstresses make them and both shirts bore labels marked the Warner Brothers Studio wardrobe department label, Natalie’s name and the date they were made, September 1, 1956.

DON’T MISS
Elvis was so turned on in classic scene you can see ‘Little Elvis’
Elvis: King Creole co-star said The King had ‘serious sexual appeal’
Elvis was so angry after he met The Beatles he wanted them deported

Elvis Presley stars in trailer for 1956 film Love Me Tender

Natalie travelled to meet him there. Apart from his apparent singing and dancing for her, The King shared one of his other great loves and took her riding on his new Harley-Davidson motorbike.

In the evening they were pictured together at a glamorous party at the Hotel Chisca. One publication ran a shot of the smiling pair saying it “is almost certain to fracture the hearts of countless teenage American girls.”

Natalie planned to spend some days with Elvis and his family as the start of a new and potentially serious relationship.

Unfortunately, one woman stood in their way.

Elvis’ mother was not happy with Natalie Wood (Image: GETTY)

Natalie’s sister Lana recalled in her book Natalie: A Memoir by Her Sister: “They met, and Elvis flew Natalie to his family in Memphis. They were to be gone almost a week, but just two days into the great adventure, Natalie called. ‘Gladys has wrecked everything,’ Natalie said, referring to Elvis’ domineering, jealous mother. ‘I don’t have a chance. Get me out of this, and fast.’

“It was agreed that Mother would call Natalie back and ask her to come home because of some family emergency. Natalie’s romance with the king of rock fizzled out.

A different side of the picture was painted by Ray Connolly, author of Being Elvis: A Lonely Life: “Natalie wore a very flimsy nightgown around the house. Gladys was like, ‘Not in my house!'”

Lana also remembered Natalie describing how Elvis, who had a notoriously close relationship with Gladys, would sit on his mother’s lap: “They were very affectionate, and it bothered Natalie. She called and asked our mom to make up a story about why she had to come home.”

Gladys was also pressuring Elvis to drop Natalie, believing she was a “gold-digger.”

It was all over, and the next time Natalie was asked by the press if things were serious with Elvis, she said: “Not right now.”

Their paths almost crossed a few years later when Elvis was offered the lead role of Tony in West Side Story. Apparently, his manager Colonel Parker was not happy about a story based on street gangs and so the star politely declined.

Years later, Natalie’s co-star Rita Moreno revealed her own affair with Elvis in Rita Moreno: A Memoir: “My delight in dating Elvis hinged entirely on one fact “I knew that no one could possibly make Marlon Brando more jealous.”

The actress had discovered women’s underwear at her then-boyfriend’s house and engineered public dates with Elvis to get her revenge. Brando apparently “threw three chairs.”

Moreno said in 2011: “I wanted to get even, so I went from one kind of king to another. I dated Elvis, who was absolutely gorgeous and had a perfect kind of face, but was not interesting. It lasted for three days.”