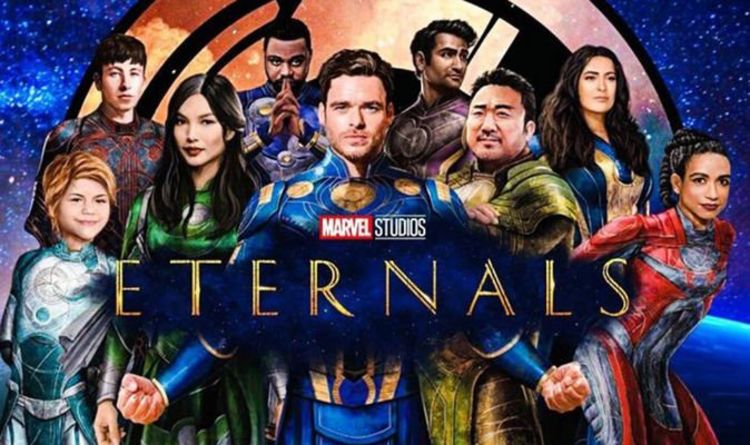 Start with an Ocar-winning director, Chloe Zhao, hot off critical darling Nomadland. Add in a ridiculously exciting cast including Angelina Jolie, Salma Hayek,  Gemma Chan, Kit Harington and Richard Madden (yup, Jon Snow and Robb Stark). Mix in the most broadly diverse blockbuster cast and themes ever, including deaf actress Lauren Midloff, Marvel’s actual first sex scene and a proper gay relationship and gay kiss. Layer it all over an epic story spanning thousands of years that taps into many of our world’s oldest myths. Shake it all together and what do you get? A big fat snooze, that’s what. Much has been said about people complaining they wanted Marvel to try something different, and then complaining when they do. Let’s be clear, that is not the problem here.

What’s worse is that there are so many flickers of fabulous texture and life struggling valiantly to get out, that it makes the general inertia and frustrayting flatness even more painful.

I just couldn’t escape the sneaking sensation that Zhao is faintly embarrassed by all this superhero stuff.  The perfunctory action scenes fast become repetitive and the classic superhero moments like posturing line-ups or descending like gods from the sky are often handled with long shots rather than spine-tingling close-ups and a knowing wink.

Don’t mess with the superhero schtick, unless you have something even better to show us. Which this film really doesn’t.

READ MORE: Marvel: All the new MCU movies and shows ‘in the works’ revealed

Marvel’s latest origin story introduces a group of ageless beings who have been on Earth for thousands of years, ostensibly to protect humanity from the ravening Deviants.

These monsters are a decidedly dull ‘big bad’, who generally seem indistinguishable and have little discernable motivation beyond stomping and snacking on passing humans. A clumsy third act introduction of sentience and (well-deserved) bid for sympathy is creakily too little, too late and then too easily dismissed.

The Eternals themselves each have extraordinary powers. Jolie’s Thena is a mighty warrior, Midloff’s Makkari has super-speed, Kumail Nanjiani’s Kingo shoots energy bombs from his fingertips (when he’s not hilariously moonlighting as a Bollywood star) and Madden’s Ikaris is basically Superman with superstrength, flight and laser-beam eyes. And so on.

So why haven’t we heard of them before, like, for example, when Thanos was wiping out half the universe?

Chan’s Sersi tells human boytoy Dane (Harington) it’s because their bosses, the Celestials, told them only to intervene when Deviants were involved.

It all sounds a bit fishy and is revealed to be so when all the twists and rug-pulling inevitably comes.

There are some great revelations, devastating (in theory but just not on screen) betrayals and losses, and a potentially globally catastrophic climax. Yet none of it manages to thrill or dazzle. Or remotely move, despite the excellent cast’s best efforts.

It’s inescapable that all of this is down to the uneven and lacklustre direction.

Zhao’s characters visibly come alive in civvies, gathered around meal tables, bickering and bantering with glimpses of fascinatingly textured dynamics built up over millennia. But put them back in spandex and it all goes stiffer than Angelina’s forehead.

They all have supposedly complex psychological layers but it is all handled so heavy-handledly that it jars and judders, when more ‘traditional’ Marvel movies have made us think and feel far more deeply with breezy ease.

None of this is helped by a fatally underwhelming score by the usually excellent Rami Djawadi which apparently wilfully fails to stir in the big tentpole moments and is rather toe-curlingly twee in the emotional punches.

There are also far too many scenes with no music at all, which is all very well for indie auteur kitchen sink dramas but exposes how inept and prosaic too much of the dialogue is. Hayek, in particular, as maternal Eternals leader Ajak is lumbered with some corkers, halfway between clunky exposition and Hallmark card kitch.

Even so, there remains so much to celebrate, especially regarding what (hopefully) will come next. Harington brings a charming playfulness to hapless human Dane Whitman, who comicbook fans know has a staggering future ahead. Barry Keoghan brings a wonderful unsettling intensity to Druig. The importance of Brian Tyree Henry’s gay Eternal Phastos and Haaz Sleiman as his human husband is immense.

However, the two most energising and exciting moments come in the end credits scenes which I can’t spoil here but both promise a massive injection of energy and, dare I say it, fun, for the sequel. A certain former boyband superstar looks set to cement himself as a bonafide Hollywood star.

Despite all the flaws, there is so much intriguing raw material here that I definitely want to see more, just with a different approach and, I’m sorry to say, a different director.

ETERNALS IS OUT IN CINEMAS ON NOVEMBER 5