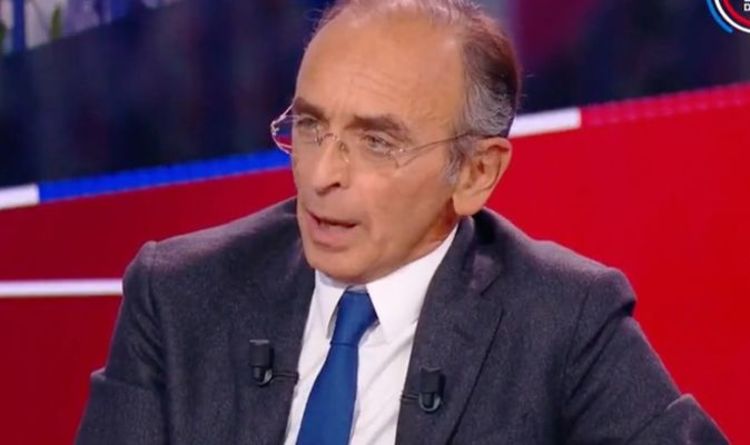 The far-right candidate for the French presidential election told BFMTV on Thursday that he would force all French officials in the EU to demand meetings are only conducted in French if he were to be elected.

Mr Zemmour accused the British of failing to keep their promise French would remain the official language of the EU, and implied the current French administration, under Emmanuel Macron, is falling short on the issue.

He said: “In French. When the British entered the EU in 1972, Edward Heath, the British Prime Minister promised Georges Pompidou, our president back then, that the French language would remain the language of the single market.

“We were six back then, then nine and then more. As usual, the British did not keep their word, but that’s the way it has always been in history.

“But above all what I don’t understand is that today there is no more England in the EU and we continue to speak English. As voluntary servitude is magnificent.

“It is because I want to defend my language. If the President of the French Republic does not defend his own language, who will?

“And I will ask that European meetings stop being systematically in English. There are other languages in Europe. There is French, there is German, there are great languages in Europe and we don’t need to speak English now that the English are no longer here.”

The comments sparked the fury of French European Affairs Minister Clement Beaune, who blasted: “In good French, we call this ‘fake news’ or a big lie: the President and the ministers always speak French in European meetings.

“Even the date of the United Kingdom’s entry into the European Community is wrong.”

The UK’s membership to the then-EEC came into effect on January 1, 1973.

President Macron was recently lambasted by the French Academy, the custodians of the French language, over the use of English on new French ID cards issued since August 2021.

The Academy urged Mr Macron to suspend the country’s biometric identity card for its “excessive” use of English translations, which it claims are unconstitutional. The move comes amid right-wing accusations the government is “erasing” French identity.

The biometric ID card, introduced in August 2021, contains a microchip and a QR code. But what’s really got the venerable academy’s back up is that every category has been translated in English, so it’s awash with words like “name”, “given name”, “date of birth”, “nationality”, “place of birth” “date of issue” and so on.

The body is denouncing a violation of the 1994 Toubon law, which made French the language of administrative documents, along with Article 2 of the French Constitution, which stipulates that “French is the language of the Republic”.

For the first time in its 400-year history, the academy has asked the Prime Minister to intervene, also threatening to take the matter to France’s Council of State, which deals with constitutional matters.

Hélène Carrère d’Encausse, director of the Academy, told Le Figaro that normally the body would issue a simple statement on the matter.

But she added: “Nowadays, however, everyone’s comments are on the same footing, so a different approach is needed.”