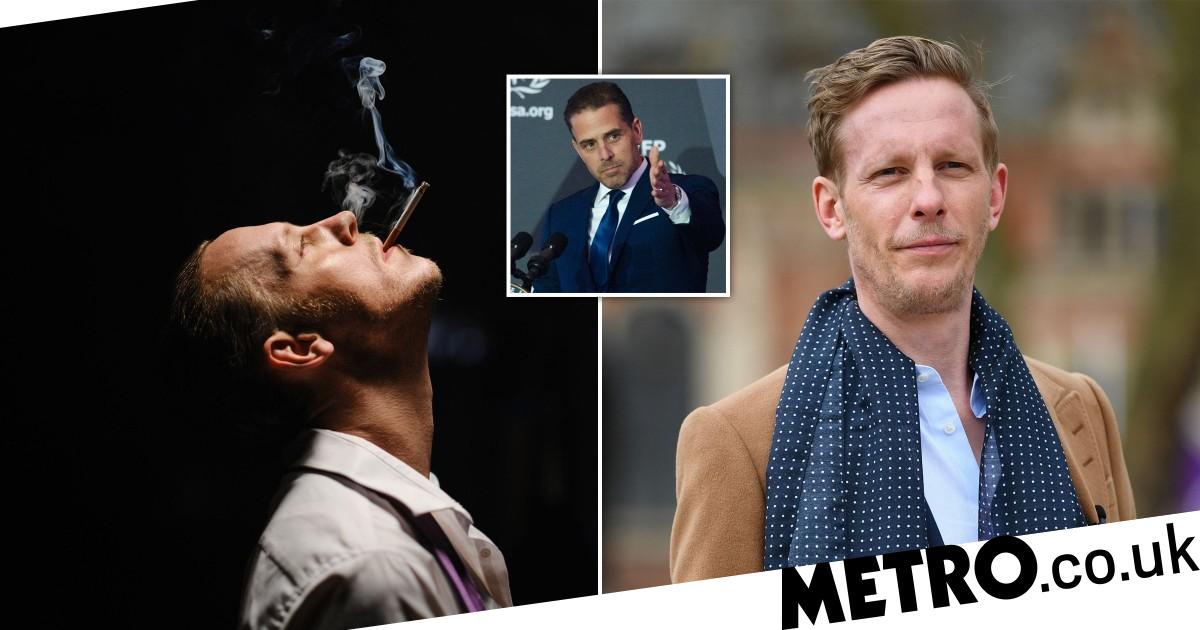 Actor and former London Mayor hopeful Laurence Fox was seen passed out on a woman’s breast with ‘cocaine’ around his nose in the first look at his portrayal of President Joe Biden’s son Hunter in an upcoming film.

And, if the first images from the Serbian set are anything to go by, this is going to be one lurid look at the US leader’s son.

The Reclaim Party politician has swapped canvassing to head back on set for a hot minute as he stars in My Son Hunter, which is written and produced by conservative married couple and Irish filmmakers Phelim McAleer and Ann McElhinney.

According to the pair, they want to ‘tell the truth’ about Hunter – who has previously admitted repeated struggles with drug and alcohol addiction – and turned to crowdfunding to finance the flick.

The photos also showed White Lines star Laurence working on an abstract painting, while another sees him smoking a cigarette.

According to the filmmakers, the picture will ‘explore how Hunter Biden amassed tens of millions of dollars from foreign entities owned by oligarchs, and the controversial interactions between Hunter, his father and other members of the Biden family.’

Lewis actor Laurence announced in September he had been cast in the independent film, and mused about the experience this week.

He wrote on Twitter: ‘Last few days of @MySonHunter.

It’s been such a joy to act again and work with such wonderfully talented people.’

Laurence added: ‘I’ll be sad to go back to my cancellation, but there is much work to be done to put an end to #CancelCulture and the monochromatic boredom of political correctness.’

In a video shared on his Twitter account, a smartly-dressed Laurence said: ‘Hello, I have some really good news – or really bad news depending on which side of the ever-widening political divide that you sit.

‘I have been temporarily un-cancelled and asked to don my acting shoes again. Why? To play Hunter Biden in a new independent film called My Son Hunter.’

The 43-year-old went on to hail the script as ‘brilliant, surreal and funny… basically because it’s true’.

He continued: ‘The Hunter story fascinates me so much, especially the vigor with which the mainstream media continue to try and suppress it.

‘I couldn’t resist the offer to enter his world and tell his truth. So on one level we are both being un-canceled – Hunter’s story and Hunter’s truth can finally be told.’

Turning to the side, he then said to himself: ‘I wonder if I can still act. About to find out. See you soon friends.’

Robert Davi, who is best known for his roles in James Bond movie License to Kill, cult classic The Goonies and for starring as an FBI agent in Die Hard, has signed on to direct.

My Son Hunter is Laurence’s first major role since becoming embroiled in an abundance of controversy over the past year. The TV star has received backlash for his comments about the Black Lives Matter movement and the Covid pandemic, including most recently comparing unvaccinated Strictly stars to ‘HIV positive dancers’.

MORE : Emilia Fox dismisses criticism of cousin Laurence Fox: ‘He is well capable of standing on his own two feet’