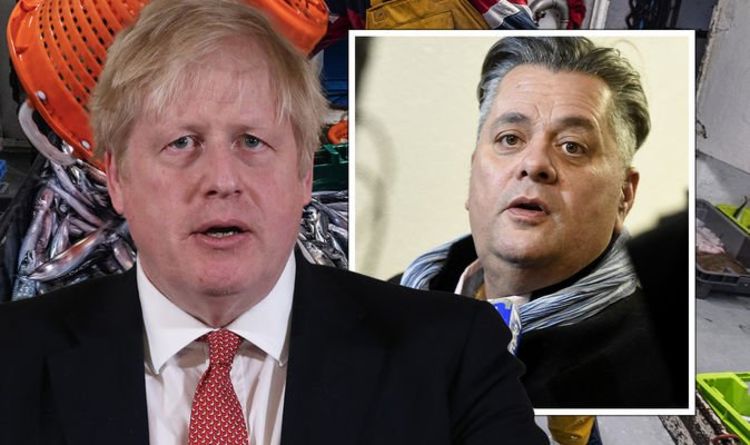 A large-scale collective action could reportedly take place as early as the weekend or next week. Fishermen hope the European Commission will take up retaliatory measures against the UK since the French government has renounced them while talks are ongoing.

The aim is to “warn Boris Johnson” that he should grant fishing licenses, and to attack the “poor English” by hindering exports to the UK.

France has repeatedly complained the UK and Jersey were not granting as many licenses as French fishermen were applying for.

He added: “The aim is to ask the [European] Commission to take its responsibilities and to ensure that the agreement is respected.

“Then, it is to warn Boris Johnson and to say to him: ‘Attention, your fishermen have access to the European market, I do not see why our boats would not have access to British waters.

“‘So now you are doing what it takes to ensure that the agreement is respected.’”

France had previously said it could stop UK boats landing in its ports, and set an ultimatum deadline of the Monday after the start of the COP26 climate summit.

However, the UK Government threatened to start “rigorous” checks on EU fishing activities in retaliation.

Just hours before his own deadline, Emmanuel Macron climbed down from his own demands, and agreed to return to the negotiating table.

EU-mediated talks with the UK are ongoing in an attempt to resolve the spat amicably.

Yesterday, French fishermen reacted angrily to what they perceived as a lack of representation from French politicians.

Speaking at a fishing conference in Brittany, Jean-Gerald Lubrano, manager of the vessel Armement Lubrano based out of Herault, said: “We don’t defend our sovereignty and our interests in a very strong way. I think that’s what fishing needs today.”

He added: “I believe that what we need today is that within Europe, our politicians and our representatives step up because fishing needs this more than ever.”

Vincent Scotto, a fisherman in Sete, said: “That’s the only thing we have left, the solidarity between us. And above all the union. Union is strength.

“Today, what we need is to be united in order to achieve this. We can’t do it alone. Fishermen know that. We need everyone.”