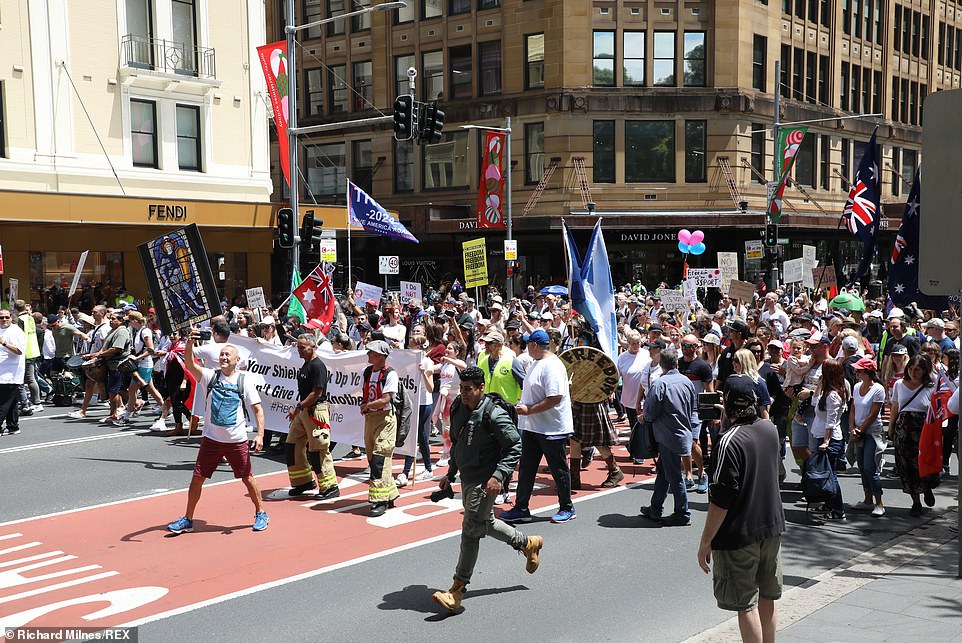 Thousands of demonstrators took to the streets in Sydney, Melbourne, and Hobart on Sunday to protest thousands of workers facing being sacked unless they get Covid jabs.

While mass protests have become commonplace through out the pandemic, this time fed-up Victorians began hurling abuse at anti-vaxxers in Melbourne.

Onlookers began screaming at the 4,000-strong crowd as they marched down La Trobe Street, while others doused them with water.

One bystander shouted at the crowds: ‘Why are you even protesting?’ and was quickly met with a shove and told to ‘go to hell’.

People in high-rise apartments flocked to their windows to pour water onto protesters as they paraded past in the streets below.

Thousands have gathered in cities across Australia to protest against mandatory vaccinations (pictured, protesters in Sydney on Sunday)

Others took to social media to complain about the demonstrations, which shut down several streets and caused back-to-back traffic in the city centre. The rally held last Saturday also saw public transport disrupted.

‘The Melbourne protest has one aim, and that’s to cause trouble in Melbourne,’ one user wrote on Twitter.

‘Shoppers have reported being too scared to visit the city. The protests are destroying small business and costing jobs. This is what domestic terrorism looks like.’

‘There is no reasoning with these people, I have seen it first hand,’ a second user agreed.

‘They have no consideration for others which I also saw first hand when I was in the city during the protests. Melbourne is sick of their bulls**t and conspiracy theories.’

The backlash didn’t seem to deter demonstrators, who stopped to play music at the Carlton Gardens before gathering outside the Royal Exhibition Building.

The demonstration began with protesters congregating outside Parliament House on Spring Street before marching down Bourke Street and chanting ‘free Victoria’.

Sydney’s Hyde Park was swarmed with protesters that held colourful flags and posters (pictured, a woman at the protests in Sydney)

The group stormed through the CBD carrying the Australian, Eureka, and Trump flags as well as signs reading ‘reclaim the line’, ‘let’s go ban Dan’, and ‘protect our children’.

A 59-year-old woman was arrested in relation to the alleged assault of a police officer and is expected to be charged on summons with unlawful assault. The police officer was not seriously injured.

Despite numbers in the thousands, the turn out was underwhelming, with several protesters admitting the crowd size was low compared to previous rallies.

Meanwhile, in Sydney, Hyde Park was flooded with protesters that brandished colourful flags and posters that read: ‘You can say no’ and ‘No vaccine passport’.

In Hobart, a large crowd bizarrely held a minute’s silence for unvaccinated workers who had lost their jobs.

The organised protests are part of a national day of action with rallies in Queensland, Perth and Canberra also kicking off on Sunday.

The suite of protests are part of a national day of action as similar rallies are held in Queensland, Perth, Canberra, Adelaide and Hobart (pictured, protests in Sydney)

Protesters in Melbourne were seen holding homemade placards that read ‘reclaim the line’, ‘my body, my choice’ and ‘freedom needs no passport’.

The Melbourne protests were particularly lively after Victorian Premier Dan Andrews made the state’s first pandemic declaration under the new laws on Friday.

Mr Andrews announced the pandemic declaration would come into effect at 11.59pm on Wednesday, when the state emergency laws expire.

Meanwhile in Sydney, protesters met in Hyde Park before marching down Elizabeth Street, past Haymarket and into Surry Hills to end up at Prince Alfred Park.

A flag promoting Donald Trump for President in 2024 was also seen in the Sydney crowds that read: ‘Save America Again’

In Hobart, hundreds of people convened on the Parliament House Lawns before marching through Salamanca Place in protest of mandatory jabs.

The crowd quietened to hold a one minute silence to pay tribute to the people who lost their jobs because they refused to get vaccinated.

A former GP in the Hobart crowds described the vaccine as an ‘assault on our children’ and vaccine mandates as ‘medical apartheid’.

Reg Watson, a spokesman for the rally, said people’s livelihoods were being threatened and that children would soon be rolling up their sleeves.

‘We believe in retaining our right to choose our own medical interventions without enforcement,’ he told The Mercury.

‘These mandates are against the Australian Constitution, the Nuremberg Code and absolute common sense.’

Further north in Queensland, thousands gathered at the Queensland-NSW border to protest vaccine mandates as the state prepares to open on Monday.

From Monday, the Sunshine State will welcome travellers from Covid hotspots like the ACT, NSW and Victoria to reunite families for the festive season.

Organisers of the protests at Coolangatta estimated about 6000 people had come out to rally against the state’s vaccine mandate, set to come into effect on Friday.

Demonstrators at the Gold Coast rally were entertained by live performances and public speakers while musicians performed at the rally held in Sydney.

On Saturday, about 1,000 protesters took to the streets in Perth to protest vaccine mandates now in place for about three quarters of the workforce.

Attendees held posters that read: ‘Down with McClown’ in reference to Premier Mark McGowan while other signs said: ‘Coercion is not consent’.

The majority of West Australians are vaccinated with the state due to hit 80 per cent within days.