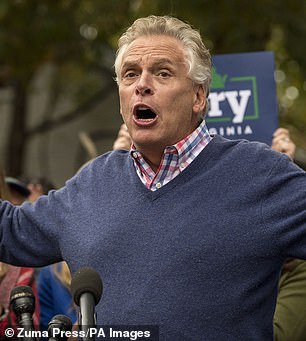 Terry McAuliffe and Glenn Youngkin have less than a 1 per cent polling gap from each other as Tuesday’s Virginia gubernatorial race comes down to the wire.

The Republican contender, Youngkin, pulled ahead of his Democratic challenger and former Virginia governor on Saturday in a FiveThirtyEight polling average. On October 28, the two were tied at 47 per cent, then on October 29, Youngkin pulled ahead of McAuliffe in a 47.5 to 46.9 per cent split.

On Friday, Youngkin raised to 47.6 per cent to McAuliffe’s 47 per cent.

One of McAuliffe’s advisers told Politico when asked for a prediction of the outcome of Tuesday’s election: ‘No one knows. It’s a toss-up.’

Former President Donald Trump repeated his endorsement of Youngkin in a statement Monday morning where he said: ‘Remember this, Glenn Youngkin is a good man, a hardworking man, a successful man. He loves Virginia and wants to cut your taxes, save your children’s education, and many other very good things.’

‘Terry McAuliffe is a low-life politician who lies, cheats, and steals,’ Trump said of the Democratic candidate vying to again be Virginia’s governor. ‘He was a terrible high-tax governor and would be, if elected, an even worse governor again.’

A polling average by Fivethirty Eight shows Republican contender Youngkin up .6% from Democrat McAuliffe in a 47.6–47% split

He continued: ‘I say to all of our millions of followers, don’t listen to the Fake News and misleading advertisements written largely by already-acknowledged perverts. Get out and vote for a man who will be a great governor, Glenn Youngkin!’

Trump is holding a long distance tele-rally for Youngkin on Monday, in which the candidate will be participating.

During the day before the election, McAuliffe and Youngkin are both heading to Roanoke in the morning and Richmond in the afternoon. Youngkin will make an additional stop in Virginia Beach.

In the evening, McAuliffe will head to Fairfax County and Youngkin will finish up in Loudoun County, the wealthiest county in the U.S. with a household median income of more than $142,000.

The defining factors of the Virginia gubernatorial race have come down to some issues in Loudoun over parental control of education, the rights of trans Virginians and critical race theory.

McAuliffe, during a campaign in Manassas, Virginia on Sunday called for the Old Dominion State to ‘diversify’ its teacher base.

He promised to create a program to attract more minority teachers while lamenting that Virginia has too many white teachers.

Donald Trump reiterated his support for Youngkin in a statement Monday ahed of the former president’s tele-rally for the candidate. He urged supporters to get out and vote despite not being a ‘believer in the integrity of Virginia’s elections’

‘We got to work hard to diversify our teacher base,’ McAuliffe said at the event.

‘Fifty per cent of our students are students of color, 80 per cent of the teachers are White, so what I’m going to do for you – we’ll be the first state in America,’ he continued. ‘If you go teach in Virginia for five years in a high-demand area — that could be geographic, it could be course work — we will pay room, board, tuition, any college, any university, or any HBCU here in Virginia.’

The reference to Historically Black Colleges and Universities insinuated that the free college program would be aimed at prioritizing attracting prospective non-white teachers to the state.

Youngkin’s absence at the upcoming Trump rally makes it seem the candidate is trying to distance himself from the ex-president as Democrats try to link them to each other ahead of Election Day.

Trump said in his Monday morning statement that this isn’t true.

‘The Fake News media, together with some of the perverts doing ads ad nauseam on primarily Fox (Fox shouldn’t take those ads!), are trying to create an impression that Glenn Youngkin and I are at odds and don’t like each other,’ he wrote.

‘Importantly, this is not true, we get along very well together and strongly believe in many of the same policies. Especially when it comes to the important subject of education.’

McAuliffe’s camp feels linking Younkin to Trump will help their chances of winning, while Trump says a candidate being backed by him will nearly assure them victory due to his base turning out.

Trump said in an interview that aired Saturday that his loyal base will need to turn out for Youngkin to win on Tuesday.

‘I think he should win,’ Trump told Fox News’ Jeanine Pirro. ‘I’ll be honest, my base has to turn out.’

Trump endorsed Youngkin against McAuliffe, who served as Virginia’s governor from 2014 to 2018.

The former president’s endorsement, Trump insinuated, is key for Republican candidates to get voters from his large base to turn out in elections that may have otherwise not gained as much national attention.

Democrats have labeled Youngkin as a ‘Trump acolyte’ to try and deter independents and moderates from voting him in as the next Virginia governor, but Trump said that tactic ‘backfires because I think it gets the base to come out and vote.’

‘The last person that ran as a Republican did not embrace Trump in Virginia,’ Trump said in reference to Ed Gillespie, who was defeated by Democrat Ralph Northam in 2017.

‘He got killed, he was absolutely destroyed,’ Trump continued, ‘I think if my base doesn’t come out, he can’t win. I think my base has to come out very strongly.’

Some feel that Trump questioning the validity of election results in general have hurt Republicans’ chances of winning local elections nation-wide because of pro-Trump voters’ reluctance to turn out if they feel their ballots won’t count.

Despite urging his supporters to turn out and vote, the former president also questioned the integrity of Virginia’s elections on Monday.

‘The reason the Fake News and perverts are working over time is to try and convince people that we do not like each other, and therefore, my great and unprecedented Make America Great Again base will not show up to vote,’ Trump explained.

He added: ‘Also, I am not a believer in the integrity of Virginia’s elections, lots of bad things went on, and are going on. The way you beat it is to flood the system and get out and vote.’