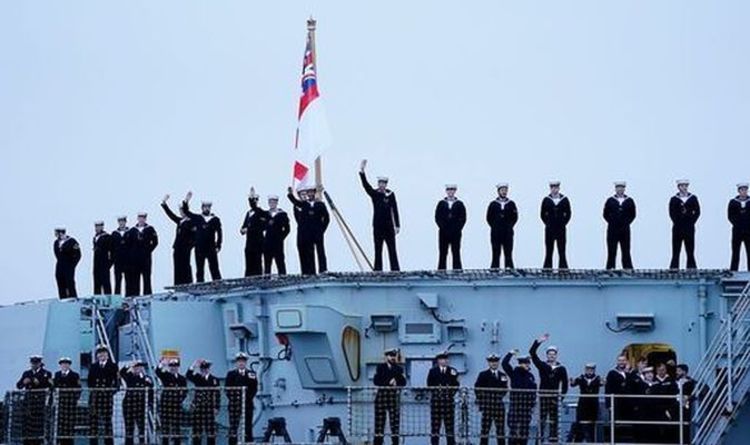 Both the HMS Queen Elizabeth and the HMS Prince of Wales will proudly fly the flag as they navigate the world’s oceans once again. The move, announced on Friday, is expected to show off a massive deployment of British naval power.

The Ministry of Defence in a series of tweets said: “The UK Carrier Strike Group returns in 2022 with HMS Prince of Wales and HMS Queen Elizabeth deploying with our NATO and international partners.”

The Royal Navy flagship arrived home this week following the first operational deployment of the carrier strike group (CSG) which was unfortunately plagued with incidents including the loss of a £100 million fighter jet at sea.

Sailors, marines and aviators, who have been deployed on the historic 7-month UK Carrier Strike Group mission, were welcomed home by their families as the British aircraft returned on Thursday.

The Ministry of Defence said: “The most significant peacetime deployment in a quarter of a century, Carrier Strike Group 21 has been more than just a military endeavour, bringing together elements of defence, diplomacy and prosperity and flying the flag for Global Britain.”

The 65,000-tonne warship arrived back at Portsmouth on Thursday afternoon while Type 45 destroyers HMS Defender and HMS Diamond returned earlier in the day, with Type 23 frigate HMS Richmond returning to Plymouth.

In a message to the captain and personnel, the Queen said: “I was pleased to hear of the important work you have undertaken to build relationships between the United Kingdom and more than twenty nations during your seven-month-long deployment.”

She also expressed her ‘sincere thanks’ to the carrier strike group and wished them ‘a most enjoyable and restful Christmas’.

Chief of the Defence Staff Admiral Sir Tony Radakin said: “Throughout the past seven months HMS Queen Elizabeth and her Strike Group have been furthering the UK’s interests and strengthening our partnerships around the globe.

“With involvement from across the Armed Forces, and our allies integrated throughout, this deployment has been a truly joint, truly international endeavour, which represents the very best of Global Britain.

“I thank everyone involved for their efforts to make this deployment such a resounding success, and I wish our returning sailors, aviators, soldiers and marines a very happy reunion with their families this Christmas.”

The biggest flashpoint of the seven-month mission occurred in June, when HMS Defender, a member of the fleet that sailed with the Queen Elizabeth, provoked fury from Russia by sailing too close to Crimea.

It led to a standoff with a Russian vessel before the country’s president Vladimir Putin boasted that he could have sunk the vessel and gotten away with it.

In July, sister ship HMS Diamond suffered a mechanical issue with its engine forcing it to undergo repairs before returning to the CSG six weeks later.

In the same month, a number of ships in the CSG, including the carrier, experienced a Covid-19 outbreak despite all crew being double-vaccinated.