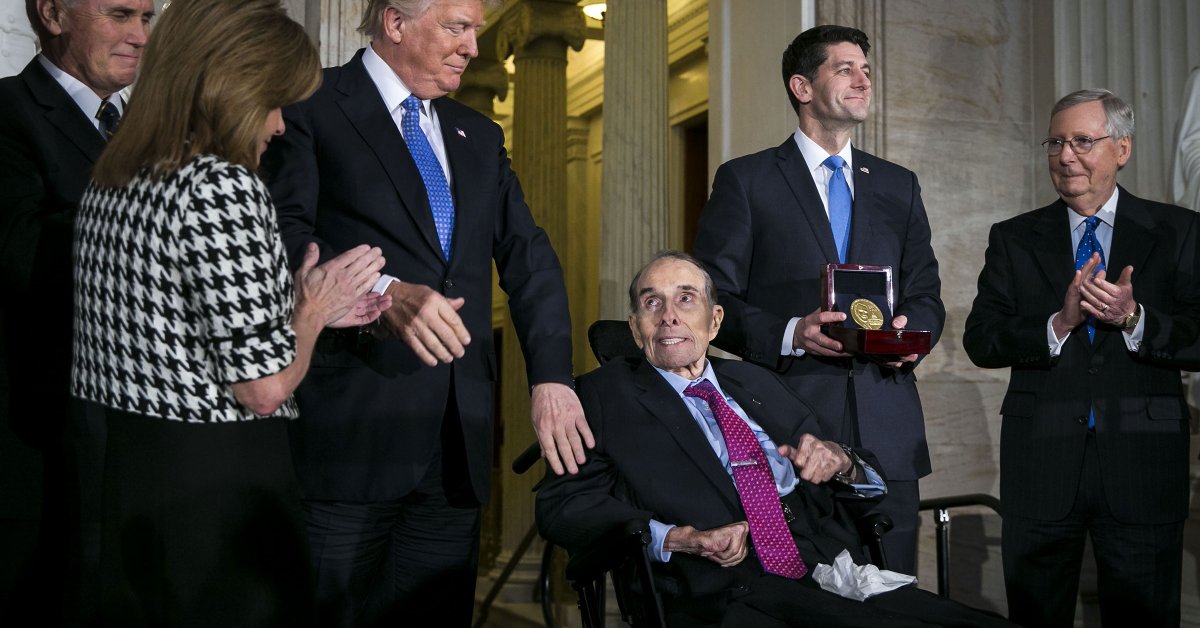 This article is part of the The DC Brief, TIME’s politics newsletter. Sign up here to get stories like this sent to your inbox every weekday.

There’s a tactic that some teachers find effective: ignoring a student’s bad conduct and instead praising other students’ more appropriate behavior. The theory is that if the student is denied the attention she or he sought in breaking the rules, they’ll (eventually) emulate the behavior the teacher has shown willing to herald. It’s better to put a sticker on the drawing that stays inside the lines than giving a time-out to the student who colored on the walls.
[time-brightcove not-tgx=”true”]

In that vein—and in the spirit of showing The D.C. Brief’s verdicts can similarly evolve—it’s time to do what for the last six years had seemed unimaginable: note a truly appropriate statement from former President Donald Trump to mark yesterday’s passing of Bob Dole, a World War II veteran, former Senate Leader and three-time presidential hopeful.

It was just three sentences, but brevity worked in Trump’s favor:

“Bob Dole was an American war hero and true patriot for our Nation. He served the Great State of Kansas with honor and the Republican Party was made stronger by his service. Our Nation mourns his passing, and our prayers are with Elizabeth and his wonderful family.”

Such grace is not particularly difficult for most politicians who make a living on appearing empathetic. But that compassion cuts hard against Trump’s brand. After all, the title of one New York Times best-seller about the Trump era is aptly titled The Cruelty is the Point.

To say Trump has been bad in dealing with deaths would be a massive under-statement. Whereas Joe Biden has rightly been called America’s Grief Counselor for his ability to help a nation navigate loss, having endured so much of himself, Trump might as well be known as America’s Funeral Skunk.

When Sen. John McCain died in 2018, Trump released a statement offering no condolences to the family, but rather detailed all of the work he had done to handle the logistics of the death of a figure who stood against so much of what Trump was attempting to accomplish with his harsh understanding of politics. Trump, who was not invited to the funeral, even restored the flag over the White House to flying at full height until aides convinced him it was a bad look not to again lower the flag to half-staff. He was furious that government buildings had lowered their flags, too, and sought a directive putting them at full-staff. And, even a year later, Trump complained that he never got a proper thank you from the McCains.

Or consider the passing of liberal icon Supreme Court Ruth Bader Ginsburg in 2020. The late Justice asked her granddaughter to release a posthumous statement, saying she would prefer that her successor be named when “a new President is installed.” Trump’s reaction? He suggested House Speaker Nancy Pelosi, then-Senate Minority Leader Chuck Schumer or Intel Committee Chair Adam Schiff had written it themselves to play politics and embarrass Trump, who seldom needed help accomplishing that.

Or Rep. John Lewis, the Conscience of Congress and a civil rights hero-turned-lawmaker. Trump managed only to tweet a terse statement last year when he succumbed to cancer, refused to attend any of his memorials and, in an interview, said he didn’t know Lewis but criticized him for skipping Trump’s inauguration.

Most recently, Trump managed to insult the memory of Colin Powell, the former Chairman of the Joint Chiefs of Staff and Secretary of State. Trump’s words in October inspired a level of incredulity that most of Washington thought had been exhausted to this point. “Wonderful to see Colin Powell, who made big mistakes on Iraq and famously, so-called weapons of mass destruction, be treated in death so beautifully by the Fake News Media,” Trump said. “Hope that happens to me someday. He was a classic RINO, if even that, always being the first to attack other Republicans. He made plenty of mistakes, but anyway, may he rest in peace!”

Trump’s critics both inside and outside rightly note that Trump’s statement regarding Dole is actually in keeping his persona: everything to him is transactional. For years, Dole was one of the few Republican party elders to give his blessing to Trump, which is why Trump was willing to return the favor in death.

I remember walking the floor of the Republican convention in Cleveland back in 2016 and looking over to see Dole sitting in the VIP box, rather isolated but still there. He was the only living Republican nominee to show up for the convention that would produce Trump as the nominee, and although the party he once led was in the process of once again shifting its identity, Dole wanted to be present at its creation. Dole declared himself a “Trumper” and watched it with curiosity, but by this summer he conceded to USA Today’s Susan Page: “I’m sort of Trumped out.”

That late change of heart aside, Trump seems to have gotten the tone right in dealing with Dole’s death. And, because it breaks with everything Washington has come to expect from him, it’s worth noting, especially as he seems to continue his hold on the current Republican Party.

While some Republicans are enjoying politics as performance art and spite’s primacy over policy, there is still a sliver of the party that just wants such statements at moments of passing to blend into the taupe walls of power. And, at least for now, Trump is being appropriately neutral. It’s worth a shot praising him for it, because it’s abundantly clear punishment holds no influence over the twice-impeached ex-President.

Make sense of what matters in Washington. Sign up for the daily D.C. Brief newsletter.