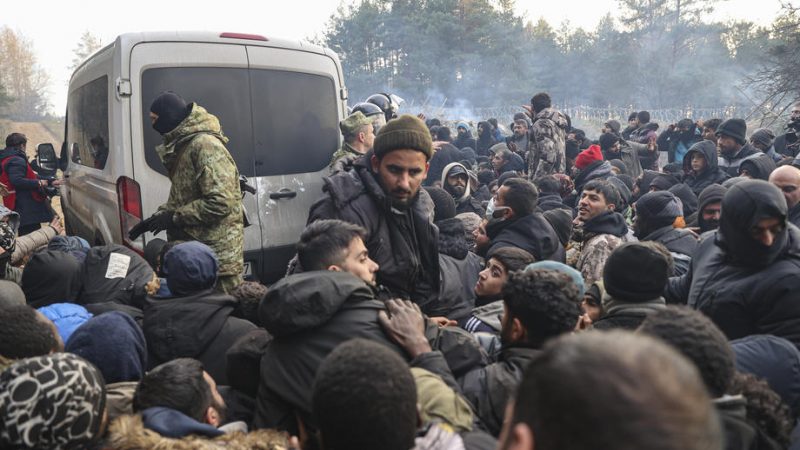 The Iraqi government said it was organising a repatriation flight this Thursday (18 November) for its citizens stuck on the Poland-Belarus border on a “voluntary” basis.

“Iraq will carry out a first flight for those who wish to return voluntarily on the 18th” of November from Belarus, Iraqi foreign ministry spokesman Ahmed al-Sahaf told Iraqi television overnight Sunday to Monday.

He did not say how many people would be able to board the Minsk-Baghdad flight, but said Iraq had recorded 571 of its citizens stuck on the border who have said they are ready to return “voluntarily”.

Thousands of migrants from the Middle East, including many from Iraq’s autonomous Kurdistan region, are camped out on the EU-Belarus border, creating a stand-off between the EU and US on one side and Belarus and its ally Russia on the other.

Western countries accuse Belarusian President Alexander Lukashenko’s government of engineering the crisis by encouraging migrants to come to Belarus and then taking them to the border.

Regular air links between Baghdad and Minsk have been suspended since August, while Belarusian diplomatic missions in Baghdad and Arbil, the capital of Iraqi Kurdistan, have been closed for more than a week.

The measures “have reduced the trips by Iraqis (to Belarus) but the problem is that some are now taking indirect flights, passing through Turkey, Qatar, the UAE and Egypt,” Sahaf said.

On Friday, Turkey banned citizens of Syria, Iraq and Yemen from flying from its airports to Belarus, while private Syrian carrier Cham Wings Airlines on Saturday halted flights to Minsk.

Iraq’s Kurdistan region presents itself as a haven of relative stability, but is often criticised for restricting freedom of expression. The region has been ruled for decades by two parties, the Patriotic Union of Kurdistan and the Kurdistan Democratic Party.

Several Iraqi Kurds have told AFP that a lack of economic prospects and security instability were behind their desire to leave.

European Commission vice president Margaritis Schinas is due to travel to Baghdad on Monday to discuss the migration crisis.