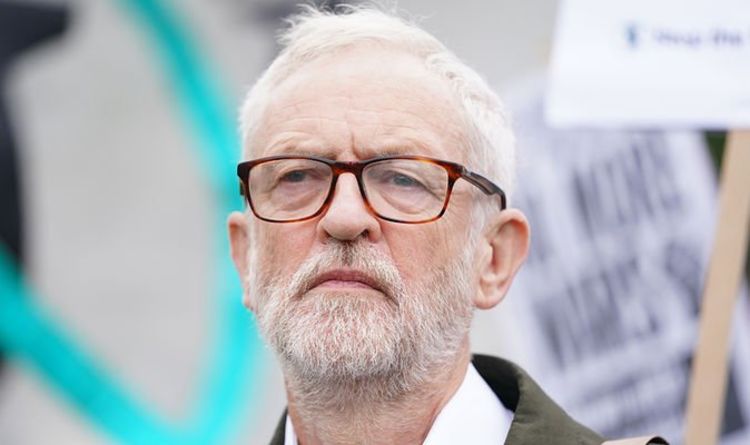 The Islington North MP is currently not a member of the parliamentary Labour Party. Sir Keir Starmer removed the whip that allows him to sit with Labour colleagues in the Commons after he failed to apologise for his response to an independent investigation into anti-Semitism in the party.

After the Equality and Human Rights Commission found the Labour Party responsible for “unlawful” harassment and discrimination, Mr Corbyn said the scale of anti-Semitism had been “dramatically overstated”.

While the veteran MP issued a follow-up statement “clarifying” his controversial remarks and was re-admitted to the party, he was continued to be denied the whip.

Sir Keir has said his predecessor must apologise before he can sit with Labour colleagues in the Commons again.

Momentum, the grassroots organisation originally set up to help make Mr Corbyn Labour leader, has accused Sir Keir Starmer of taking the “route to defeat” at the next election by punishing the former frontman.

“These members have been treated despicably.

“Jeremy must be allowed back into the PLP (Parliamentary Labour Party) and the targeted suspension of socialists must be called off.

“In an era of climate breakdown and wealth inequality, where bold solutions consistently poll well with the public, marginalising Labour’s left flank is a route to defeat.”

The Labour Party says Mr Corbyn’s situation will be kept “under review”.

Since becoming leader last spring, Sir Keir has kicked out a large number of members who have fallen foul of the party’s rules.

He said he wanted to make sure Labour was a party that was welcoming to Jews.

Deputy leader Angela Rayner warned last year that she was prepared for “thousands and thousands” of members to be suspended to clean up the party’s image.