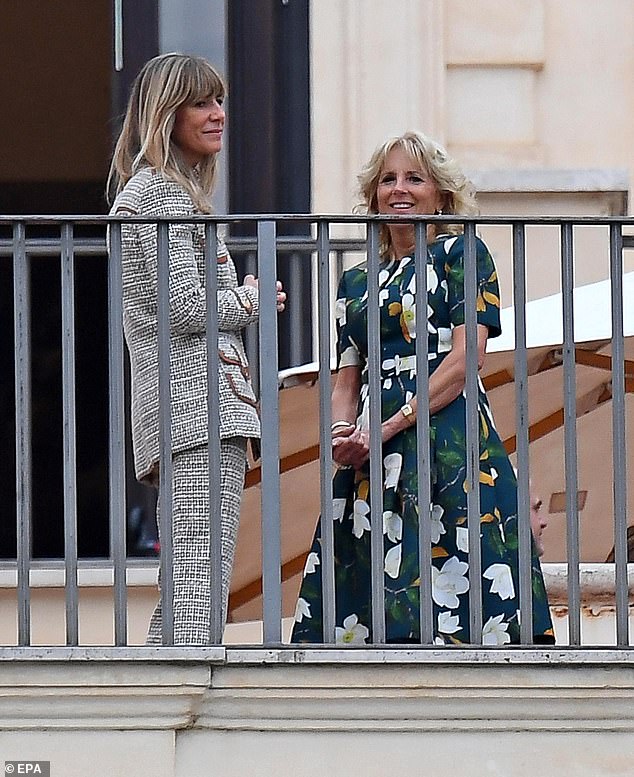 First Lady Jill Biden attended a farewell luncheon with the other spouses of the G20 Sunday afternoon in Rome.

Biden was dressed in a green floral dress paired with heeled black over-the-knee boots, and greeted Italian Prime Minister Mario Draghi’s wife Maria Cappello, the host of partner events, at the top of the stairs on the Piazza del Capidigolio.

Biden and the other spouses were lunching at the Capitoline Museums.

She was captured holding court with Spain‘s Begona Sanchez and Joachim Sauer, the husband of German Chancellor Angela Merkel.

On Monday, she’ll split off from President Joe Biden – who’s headed to Glasgow, Scotland for the COP26 climate summit – and head south to Naples instead, where she’ll visit a DOD-funded high school.

At the G20, Biden spent time with both French President Emmanuel Macron and his wife Brigitte, as the U.S. tried to repair relations with its oldest ally after the submarine row.

She stunned in a sparkly lilac fitted dress by Ralph Lauren at Saturday night’s G20 dinner, which took place at the 16th century Quirinale Palace in Rome.

So Dr. Biden sat next to the French president, while President Joe Biden was seated next to European Commission President Ursula von der Leyen.

Dr. Biden and President Macron previously bonded when they represented their respective countries at the opening ceremony at the Tokyo Olympics in July.

Earlier Friday, Biden had tea with Cappello at the Chigi Palace, while President Biden met with the Italian prime minister.