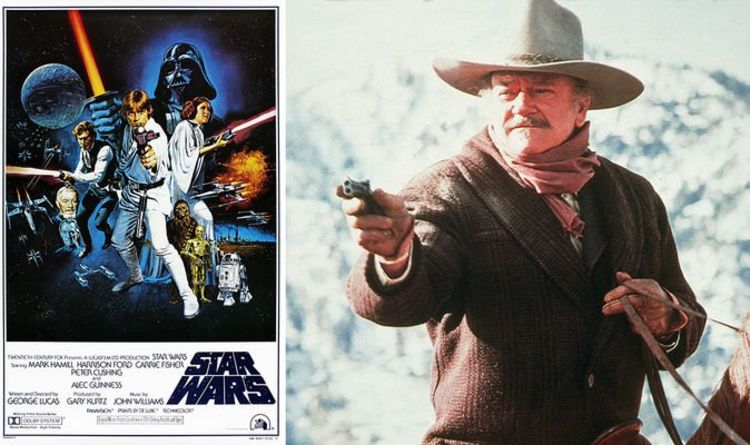 John Wayne died of stomach cancer on June 11, 1979 at the age of 72. Just three years later he starred in what many believed to be his final movie, The Shootist. The 1976 Western co-starring Lauren Bacall, James Stewart and Ron Howard saw Duke play JB Books, an ageing gunfighter with cancer at the turn of the 20th century.

It’s an urban legend that Wayne was terminally ill like his character when filming The Shootist.

Duke had been cancer free after having his left lung and several ribs removed in 1964 after a diagnosis of the disease.

However, in early 1979, metastases were found in his stomach, intestines and spine and he died that summer.

What might surprise fans of the Western star is that he had an uncredited cameo in 1977’s original Star Wars movie, later retitled Episode IV: A New Hope.

Star Wars director George Lucas was a big fan of Wayne growing up, allegedly inspiring his later reedit of Han Solo only shooting Greedo after the alien fired at Han first.

The reason being that shooting first would be something that a Wayne Western character wouldn’t do, according to CBR.

On top of this, when Luke Skywalker finds the burnt bodies of his aunt and uncle, the scene is clearly inspired by John Ford’s The Searchers, when Duke’s character finds the charred corpses of his brother, sister-in-law and nephew.

Now while Wayne’s voice is in 1977’s Star Wars it turns out this wasn’t included by Lucas.

The uncredited cameo itself sees Wayne’s vocals from some stock audio used to voice Garindan, a long-snooted Kubaz who sells information to the highest bidder as an Imperial spy.

In Star Wars, the creature tells the Stormtroopers where Luke, Obi-Wan and the droids are located. Garindan’s vocals are all squeaky because the audio is simply Wayne’s voice distorted. Star Wars sound designer Ben Burtt explained years later how he ended up creating what was technically The Hollywood legend’s last screen role.

Burtt said: “I always wanted to do an insect man – we didn’t really have an insect man come along until Poggle the Lesser [from Episodes II and III]. We had that character that looked kind of like a mosquito from the first Star Wars [Garindan] that we found we needed a sound for.

“And I was wondering back a few months ago how I did it – because I keep notes and tapes – and I discovered it was an electronic buzzing which had come off of my synthesizer that was triggered by a human voice.”

The Star Wars sound engineer then went on to share how he discovered the vocals was that of Wayne himself.

Burtt continued: “And I listened to it and realised it was John Wayne. I had found some loop lines in the trash from the studio that had been thrown away.

“So the buzzing was triggered by some dialog like ‘All right, what are you doin’ in this town’ or something like that.”

So by the sounds of it neither Lucas nor Wayne himself had anything to do with this incredible Easter egg.