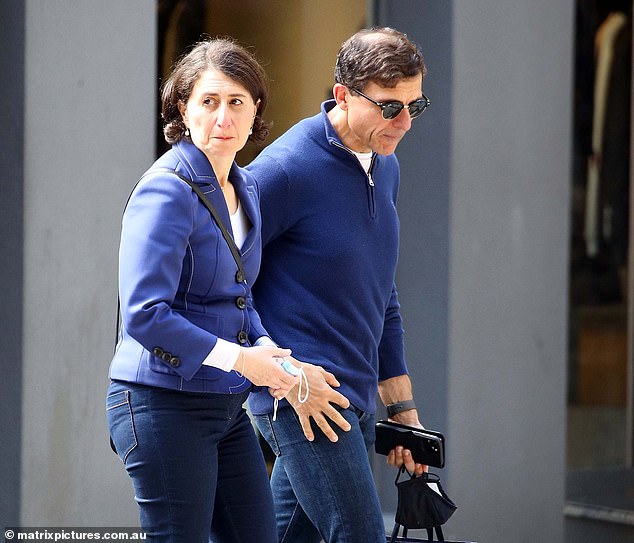 Josh Frydenberg has dropped a huge hint that Gladys Berejiklian could run for federal politics at next year’s election.

The Liberals are believed to be touting the former NSW Premier to run for Warringah, which is next to her state electorate of Willoughby on Sydney’s Lower North Shore.

The seat is currently held with a 7.2 per cent margin by independent Zali Steggall who took it from Tony Abbot in 2019 with a pro-climate campaign.

Speaking to Sky News on Friday morning, the Treasurer said the uber-popular Ms Berejiklian would be ‘most welcome’ in Canberra.

‘I don’t think Gladys Berejiklian’s made any decisions about her future, obviously she’d be most welcome in federal politics,’ he said.

‘I think she’s a wonderful leader, an incredible politician, and she’s a good person to boot and I have a very positive and construction relationship with her, but that will be a decision she will need to make in her own time.

‘But I would hope her career in public life is not over yet.’

Ms Berejiklian, who could alternatively turn to the private sector, has so far refused to comment on her future options.

Mr Frydenberg’s glowing reference comes after Scott Morrison blasted the NSW corruption watchdog for its ‘disgraceful’ treatment of Ms Berejiklian and accused it of investigating her love life instead of criminal conduct.

Throwing his support behind the ex-premier, Mr Morrison said she was ‘done over’ and ‘humiliated’ by ‘shameful attacks’.

Ms Berejiklian resigned in October after investigators said they were probing whether she encouraged or allowed corrupt conduct by her secret ex-boyfriend and former MP Daryl Maguire between 2012 and 2018.

Speaking in Parliament about his plans for a federal integrity commission, Mr Morrison said he would avoid replicating the NSW Independent Commission Against Corruption because of what happened to Ms Berejiklian.

‘What was done to Gladys Berejiklian, the people of NSW know, was an absolute disgrace. And I’m not going to allow that sort of a process, which seeks to publicly humiliate people on matters that have nothing to do with the issues before such a commission… and seek to reduce the integrity of people like Gladys Berejiklian.’

Mr Morrison said the former premier was ‘done over by a bad process, and an abuse’.

‘I’m not going to have a kangaroo court taken into this Parliament,’ he said.

The ICAC probe investigated whether Ms Berejiklian breached public trust by not reporting any suspicion of corrupt conduct and probed what role she had to play in two government grants handed out in Mr Maguire’s electorate.

It heard taped phone calls between Ms Berejiklian and Mr Maguire in which they called each other affectionate nicknames such as ‘hawkiss’, which means ‘my beloved’ in Armenian.

‘These things, these matters should be looking at criminal conduct, not who your boyfriend is,’ Mr Morrison said.

‘That’s what it should be, these things should be looking at criminal conduct. Criminal conduct is what this should look at not chasing down someone’s love life,’ he said.

The inquiry heard Ms Berejiklian said she would ‘throw money’ at Mr Maguire’s electorate and said she had secured him $170million for a new hospital in ‘five minutes’.

Ms Berejiklian has denied any wrongdoing. An outcome of the investigation is expected early next year.

During the inquiry her popularity slumped by at least 10 percentage points but has now recovered to its previous high levels, according to Resolve Political Monitor.

Mr Morrison made the comments after he came under pressure in parliament to introduce a federal corruption watchdog.

Liberal MP Bridget Archer, who represents the marginal Tasmanian seat of Bass, crossed the floor and supported independent MP Helen Haines who wants a debate on her integrity commission bill.

Ms Archer said it was a ‘difficult decision’ to vote against Scott Morrison but said he has taken too long to introduce a corruption watchdog which he promised in 2018.

Scott Morrison slammed the ICAC for its investigation into Ms Berejiklian. Pictured: Mr Morrison in Parliament on Thursday