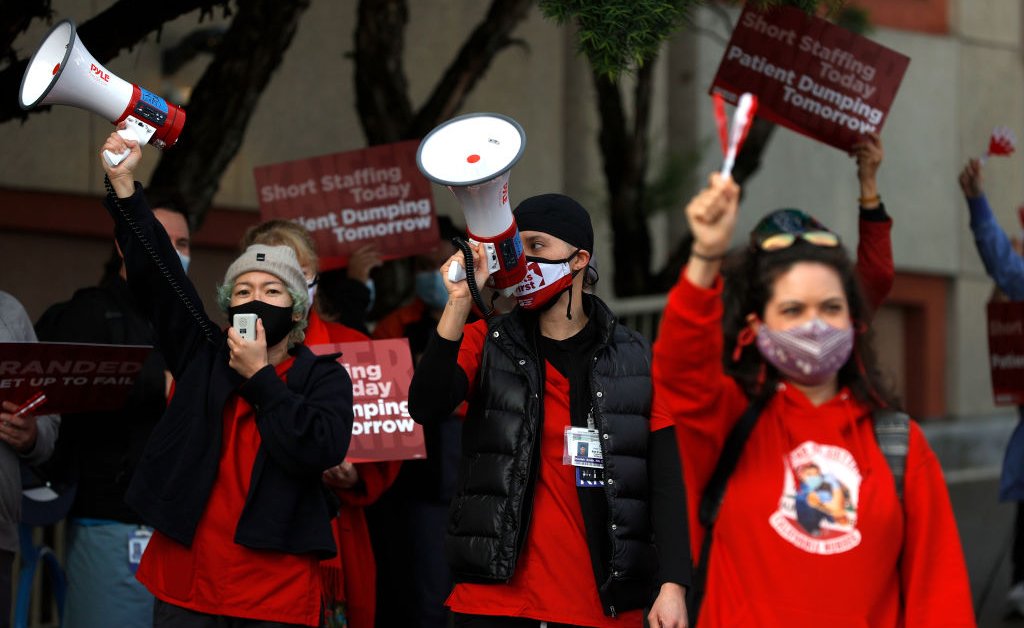 Bloomberg — Kaiser Permanente reached a tentative agreement with unions, averting what could have been the largest strike yet this year. The averted strike would have involved more than 30,000 workers from nurses and pharmacists to janitors and locksmiths.

The health-care company reached the agreement on a four-year contract covering 50,000 employees in 22 local unions, the Alliance of Health Care Unions said in a joint statement Saturday.

Workers were planning to walk out of hospitals across mostly the U.S. West Coast on Monday morning, a move that could have disrupted a health-care system recovering from the damage of the Covid-19 pandemic and as U.S. hospitals confront a new wave of infections heading into the winter.
[time-brightcove not-tgx=”true”]

“These were challenging negotiations, but this tentative agreement demonstrates the strength of our labor management partnership and the unique success it can achieve,” said Christian Meisner, senior vice president and chief human resources officer at Kaiser.

Guaranteed wage increases each year through 2025 in every region
No reductions in health benefits
Maintaining retirement benefits
Addition of bonus plans
New safe staffing and workload language
Workers are stepping up labor actions across the country, demanding better pay, benefits and conditions, partly driven by a tight labor market and pandemic fatigue. More than 100,000 workers have recently either threatened or gone on strike — including ongoing actions by 10,000 Deere & Co. employees and 1,400 workers from Kellogg Co.

Kaiser’s health-care workers helped carry the U.S. through the pandemic and “they should see a fair return on what is now a very, very profitable company,” AFL-CIO President Liz Shuler said in an interview on Bloomberg Television’s “Balance of Power With David Westin” on Friday. Workers are saying “enough is enough,” she said.

For the unions, the agreement alleviated issues including a contract proposed by Kaiser’s management, which included a 2% wage increase and established what union representatives called a two-tiered wage system that would compensate newer employees at lower rates than existing ones, or adjust rates based on where workers are located. With this agreement, that two-tiered system has been taken off the table.

The tentative pact, which may take several weeks to ratify, was reached a day after Vermont Senator Bernie Sanders and seven Democratic colleagues spoke out against the two-tier pay proposal and urged Kaiser to increase its pay offer. “Considering your recent profit margins, we find this offer to be demeaning and unacceptable,” they wrote.

Kaiser said earlier that wages and benefits make up half of the institution’s total operating costs, and adjusting them will help lower the rising price of health-care. Its union-represented employees earn about 26% above the average market wage, the company said, and in some places, 38% higher.

The true scope of the walkout could have been even larger than the 30,000 in California, Oregon and Washington: They would have joined more than 750 Kaiser stationery and biomedical engineers that have been picketing for the past two months, and other affiliated one-day strikes could have follow across the country.

Kaiser has long been considered “the nation’s largest, longest-lasting labor-management partnership” and the gold standard in how companies can work hand in hand with unions, Steven Greenhouse wrote in his book “Beaten Down, Worked Up.” That relationship has weakened in recent years, organizers said, as turnover at the executive level and the death in 2019 of Kaiser’s more union-friendly CEO, Bernard Tyson, meant institutional knowledge and support was lost.

Many U.S. hospitals were already hurting before the pandemic as more profitable elective procedures moved to outpatient settings and rural hospitals coped with declining and aging populations. Then, the virus shut down normal operations and hit facilities with even sicker patients.

A survey by health-care practice advisory firm BDO USA this year showed that only 27% of U.S. hospitals had more than 60 days’ cash on hand. The American Hospital Association, meanwhile, estimates the pandemic will have cost the approximately 6,000 U.S. hospitals almost $400 billion by the end of this year.

Workers argue that Kaiser has largely shook off the upheaval. Kaiser’s annual operating revenue reached $88.7 billion in 2020, compared with $47.9 billion in 2011, according to its annual report. Union leaders say the health system earned $6 million a day in profit during the pandemic.

A survey of more than 20,000 health-care workers during the pandemic found that nearly half reported feeling burned out, with the effects more pronounced among women who dominate in fields like nursing. Other studies found that between 20% to 30% of frontline health-care workers were considering exiting the profession entirely.

This disillusionment, paired with a national workforce shortage, has strained workers even though a strike would have the potential for broad disruption for patients.

“The direct care workforce does not take striking lightly because they’re really committed to their patients,” said Eileen Boris, the Hull Chair and a professor of feminist studies and history at the University of California at Santa Barbara. “But they understand that the conditions of work are also the conditions of care.”