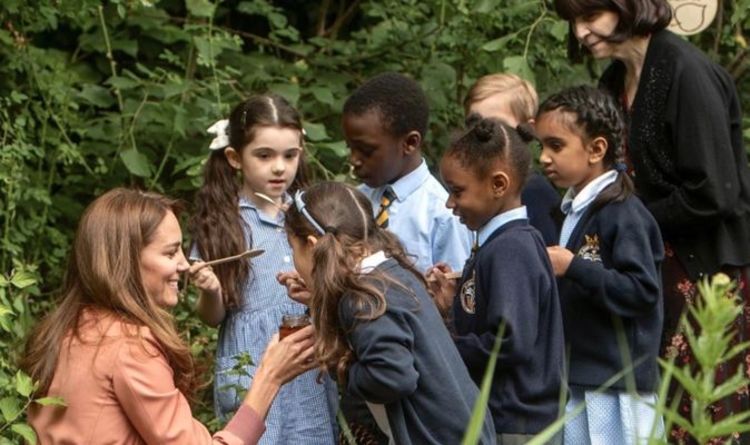 Royal fans were quick to compliment the Duchess and described the image as both “adorable” and “lovely”.

While others praised the 39-year-old for her work with children during her time as a member of the Royal Family.

@Sapphireblues3 wrote: “The Children’s Princess” along with a heart emoji, while @LoverofUK added “Catherine does amazing work with children”,

A fan page for Kate and William with the user @loveforcambridg heaped further praise on the royal writing: “The Duchess does a wonderful job with those amazing charities and on her Early Years project!

“She loves children and does her best to make their lives better! She is their Princess”

Royal fan @Jessicawood94 also complimented Kate, calling the Duchess “a natural with children”,  and compared her to the character of Miss Honey from Roald Dahl’s children story Matilda.

The adorable snap dates from the Duchess of Cambridge’s visit to the National History Museum’s Wildlife Garden earlier this year.

While there she met with local school children and joined in with family activities, which form part of a programme being developed to engage young children and families in outdoor learning.

The programme aims to encourage children in the UK to visit green spaces more and encourages young people to connect with the nature that surrounds them.

The image shows Her Royal Highness beaming as she offered fresh honey from the Anmer Hall beehives to a group of children.

She told the schoolchildren: “This came specially from my beehive”, before encouraging them to have a taste and compare it to honey they might have in the cupboard at home.

Accompanying the image for World Children’s Day, the caption posted by Kensington Royal reads: “Investing in a child is ultimately an investment in our future societal health and happiness.”

World Children’s Day is an annual day of action for children, by children celebrated on November 20.

A follow-up tweet to the initial image of Kate reads: “Today is #WorldChildrensDay.

“Across the UK & right around the world there are thousands of charities working to support children and families; & inspirational young people leading the way on important causes, showing the vital role the next generation have in shaping the future.”

This tweet was accompanied by an image of the Duchess dating from 2019 when she and Prince William visited the SOS Children’s Village in Lahore.