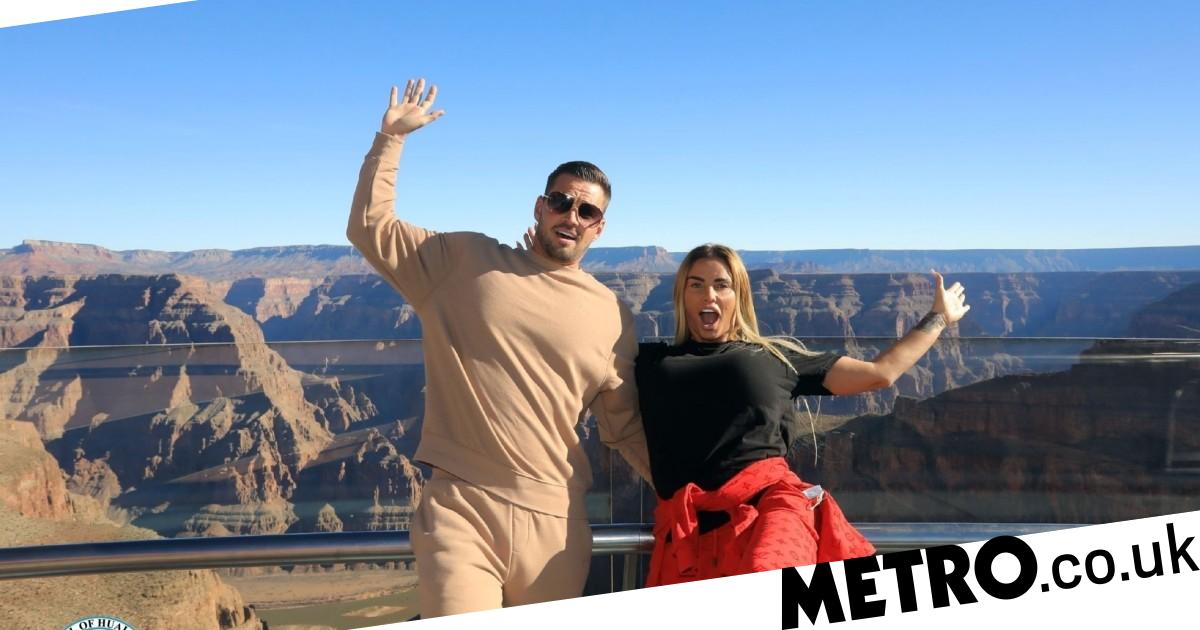 Katie Price and Carl Woods shared a kiss at the Grand Canyon as they played tourists ahead of their rumoured Las Vegas wedding.

The engaged couple jetted to Sin City last week, ahead of Katie’s sentencing next month for a drink-driving charge.

As well as checking out all the sights of the famous strip, Katie, 43, and Carl, 32, took a trip from Nevada to Arizona to see the Grand Canyon.

In pictures from their day trip, the couple posed on the viewing platform overlooking the vast canyon, before sharing a passionate kiss.

Katie wore a black t-shirt and red tracksuit bottoms, with a matching jacket tied around her waist, while Carl wore a beige tracksuit and a white t-shirt.

Prior to visiting the Grand Canyon, Katie and Carl were seen checking out the STRAT Hotel, Casino and SkyPod and Nevada State Park.

It seems the pair are getting all their tourist activities in the bag before completing the ultimate Vegas activity – getting married.

Upon arriving in Vegas, Katie and Carl headed to the Clark County Marriage License Bureau to complete the necessary paperwork to pick up a marriage license.

The couple were seen raising their right hands at the booth as the clerk processed their papers, with Katie reportedly overheard joking: ‘Ooh, signing our life away.’

The license revealed that Katie is planning to change her surname to Woods.

If Katie and Carl do tie the knot this week, they will join a long list of celebrities who got married in Las Vegas.

Frank Sinatra and Mia Farrow, Carmen Electra and Dennis Rodman, Pamela Anderson and Rick Salomon, Britney Spears and Jason Alexander, Bruce Willis and Demi Moore, Cindy Crawford and Richard Gere, Angelina Jolie and Billy Bob Thornton, and Shia LaBeouf and Mia Goth have all made it official in the land of Elvis-officiated weddings.

This will be Katie’s fourth wedding, following marriages to Peter Andre, Alex Reid and Kieran Hayler, while it will be Carl’s first marriage.

The couple are reportedly also planning on getting matching tattoos to mark their memorable trip to Vegas, with a source telling The Mirror: ‘They want it to be a romantic gesture to display their love for one another.’

The trip comes during a difficult few months for Katie, after she pleaded guilty to drink-driving following a single-car collision in September.

The mother-of-five’s sentencing was deferred until December so she could access treatment at rehab facility The Priory.


MORE : Good Morning Britain flooded with complaints over ‘insensitive’ interview with Reeva Steenkamp’s parents: ‘They need to stop this’