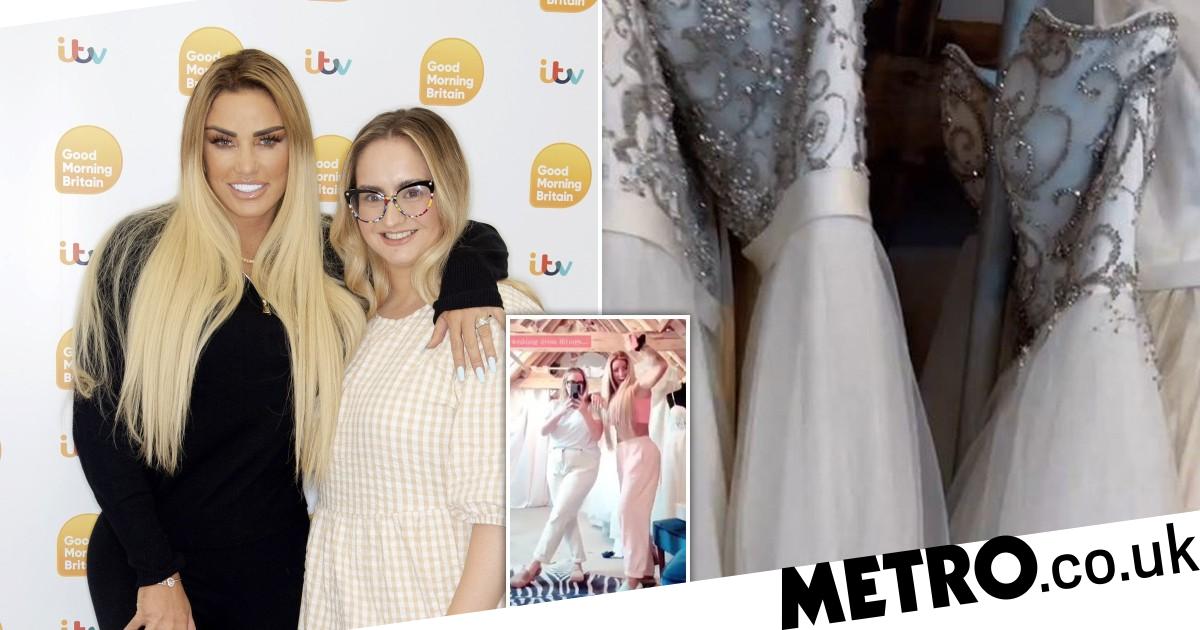 Katie Price has revealed she and her sister Sophie and mum Amy have been shopping for wedding and bridesmaid dresses.

The trio visited a bridal shop in Worthing, close to where they live after driving down on a girls’ day out.

Katie was seen rifling though the wedding dresses as she sang The Dixie Cups’ song, Chapel Of Love.

The trip appeared to be to find a wedding dress for her sister Sophie, who got engaged earlier in the year, rather than for Katie, 44, who is engaged to Carl Woods, 33.

Sophie also shared snaps of her and her family in the shop, before heading to Jo Malone to pick out the perfect fragrance for her big day.

She told her followers: ‘Got a few wedding day treats from @jomalonelondon this evening…’

Sophie had picked out two fragrances from the brand to layer on top of one another, before adding: ‘All safe and sound at home ready for next week…

‘Did you wear a particular perfume on your wedding day? I’ve had so many suggestions from friends… let me know.’

Katie’s sister had revealed her engagement in March, sharing a photo of her emerald ring as she told her followers: ‘Well I didn’t expect that round the fire pit last night…I said YES!!!’

The family trip for a final fitting comes after Katie celebrated the launch of son Junior Andre’s first single.

The 17-year-old, who she shares with ex-husband Peter Andre, released his first song Slide on Friday, preceded by a launch party for the track.

Katie did not reveal whether she was at the launch event, but showered Junior with praise on social media, sharing sister Sophie’s post from the night.

She wrote on her Instagram story: ‘So proud of my son @officialjunior_andre’, as he finally let fans hear the track he’s been working on since signing to Columbia Records last summer.


MORE : Katie Price gets her glam on in make-up masterclass after sharing frustration of getting caught in traffic on way to Birmingham event