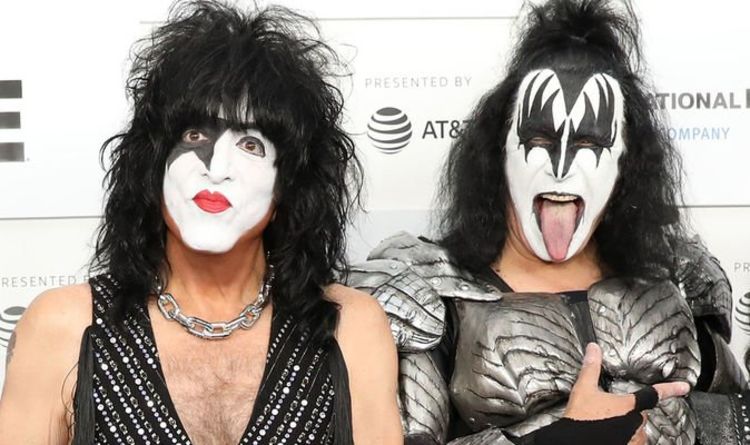 It’s far to say that KISS are almost as entertaining and outrageous off-stage as they are in their full make-up and costumes. While Eric Singer and Tommy Thayer remain resolutely quiet, founding members Gene and Paul continue to banter and bicker after fifty years together – and don’t hold back when they also talk about the other two original members, Ace and Peter. And Paul thinks he knows exactly where Gene’s famously unapologetic behaviour comes from. WATCH THE FULL NEW KISS INTERVIEW BELOW

The band were sailing on the annual KISS Kruise when the gathered fans onboard had a chance to ask their idols questions.

Gene simply replied: “What’s your point?”, to which Paul said: “That!”

Things got even more playful when they were asked to name their all-time favourite songs – to listen to, not to perform.

Talking to his friend, Paul said: “It’s interesting your song comes from the movie Pinocchio about a guy who tells lies and his nose grows.

“It’s hard to come up with a single song… Of Kiss songs, I would say Love Gun, or Detroit Rock City.”

Like most major rock bands, there have been numerous high-profile clashes, rifts and feuds.

Last year Paul even admitted he “didn’t particularly like” Gene when they met in the band Wicked Lester: “But there was pragmatism involved. You have to prioritize and figure what’s most important to you to reach your goal. And I knew that Gene and I were much stronger together than me alone.”

These days, fifty years later, he says: “We’ve never been closer than we are now. We’ve come so far and done so many great things for each other, it would be ungrateful if we were anything less. We’re there to cheer each other on and text each other. We’re more than good.”

The same can’t be said for the other two founding members.

Talking to the Kiss Kruise crowd, Gene said: “I want to say something on behalf of Ace and Peter. This is important. Through the years there have been some bad decisions made.”

Paul, however, jumped in to say: “But good things come from things that sometimes seem bad. The good thing that came from their departure from the band is sitting up here with us.”

Pointing to Eric and Tommy, he said: “We couldn’t have made it without Peter and Ace, and we couldn’t continue today with them. They are strong parts of our foundation, but this is what’s building the monument today.”