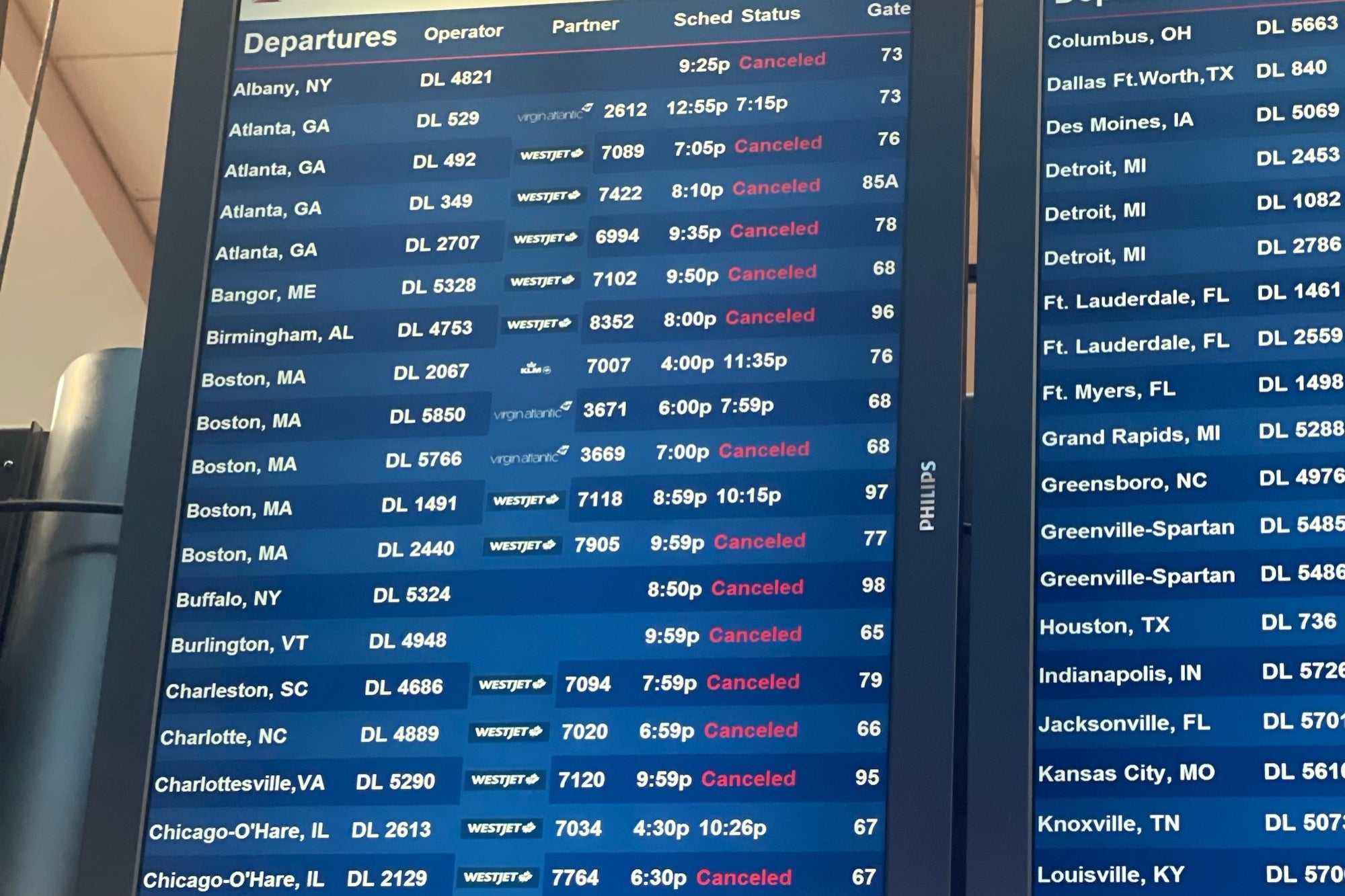 It was the text I sent to my friends after finally boarding my flight around 3:02 p.m., which was originally scheduled for a 12:55 p.m. departure. Technically, it was the second flight I was supposed to be on — the first was a 9:30 a.m. flight to Washington, D.C., (DCA) but canceled without explanation about two hours before the scheduled departure.

I let out a sigh of relief as I buckled into my Delta flight and prepared for a very delayed takeoff just happy that I would make it to our nation’s capital before dark.

(Narrator: She would not, in fact, make it before dark.)

My flight was one of the 1,000 flight disruptions — including over 600 cancelations — at New York‘s LaGuardia Airport on Thursday due to inclement weather, staffing shortages and pilot strikes among airlines. Many, including myself, faced hours-long wait times in terminals and on the tarmacs, which led to overcrowded runways and waiting areas.

I noticed it was taking an abnormally long amount of time for the plane to taxi but chalked it up to a crowded runway, which is exactly what we were initially told — congestion caused by inbound and outbound delays at the airport.

Planes backed up on the runway.

About an hour and a half had passed. Congestion issues became weather issues and another 40 minutes passed. Morale was low, but one singular biscotti cookie gave me enough sustenance and sanity to not lose my composure. When words fail, snacks do, in fact, speak.

We were then told DCA was at a ground stop (meaning no more planes could land on the tarmac there) and that it would be an indeterminate amount of time until we would be leaving, and we were then permitted to unbuckle our seatbelts and turn our cell phone services back on.

After four hours on the tarmac (30 due to congestion on the runway), we returned to the gate where we were told to “figure out our future travel plans.”

Translation: Wait in a 150+ person long line at the Delta help desk which took, from the time I exited the aircraft and walked to the back of the line to the time I saw an agent at the desk, approximately three more hours.

The long line to get to customer service. The wait was about 1.5 hours from this point onward.

Thankfully, I was able to make two new friends named Lauren and Ruth who helped me laugh through the seemingly never-ending waiting period, both of whom were not based in New York and were now stranded in the city.

Pro-tip: In times of need, your best ally may just be the stranger in the seat in front of you.

I returned home after over 14 hours at the airport, around midnight, defeated, and cried into an order of McNuggets.

FlightAware estimated that there were a total of 505 delayed flights Thursday at LaGuardia, coupled with 454 canceled flights. This made for a crowded LGA.

Never made it out LaGuardia …. After being in the airport for almost 8 hours my flight was canceled I feel so bad that I couldn’t go visit my mom #deltastinks pic.twitter.com/Gt9daVOzYS

Delayed at Laguardia for 3+ hours. They originally said to us there wasnt a gate for the plane but then changed their story that we were waiting for the flight attendant crew. When i asked the gate attendant why she lied she told me she made a “judgment call” to “preserve order”

stranded in nyc until tomorrow cuz laguardia cancelled 1.5k+ flights and we cant get any rental cars or flights out of any surrounding states:) no luggage no clothes! but at least my puppy is cute pic.twitter.com/iaODQzCo6C

@united you are holding us on a diverted plane at Newark that was suppose to land almost 3 hours ago at LaGuardia. Why can’t you unload our luggage and LET US GET OFF. Now the plane next to us is preventing us from leaving…. Where is the common sense?

Two New York passengers, Patrick and Riley, were delayed on the tarmac for hours after being told that there were a whopping 57 planes in front of them waiting to take off.

As of late Friday afternoon around 4 p.m., there were another 249 reported flights delayed and 219 cancellations.

Look at all that red!

“We know spending additional time onboard your flight waiting to depart from New York, followed by a subsequent gate return and cancellation isn’t what you planned today,” Delta wrote in an email to me early Friday morning. “Inclement weather, ATC constraints and taxi congestion prevented us from operating as planned. Though we can’t control the weather we are conscience of the fact that this makes for a disappointing travel experience. I’m very sorry for the inconvenience this caused.”

Staffing shortages could also be to blame.

Earlier this season, airlines had warned of summertime cancelations and a lower volume of flights.

New Yorker Abigail Dowd was flying home to LGA from Savannah, Georgia on Friday when she learned that her 1:21 PM flight had been canceled.

“My sister texted me at 8:24 this morning and asked for my flight information,” Dowd said. “I opened the Delta app to send her a screenshot of my ticket and said this.”

“I immediately panicked,” she said. “I checked my email: nothing. No reroute or rebooking from Delta … Normally, they give you the option for a callback, that wasn’t offered.”

Dowd eventually had to rebook a new flight on JetBlue in hopes of making it back to LGA on the same day, noting that most flights were already fully booked.

“I honestly cannot even belive I even made it out today,” she admitted. “Even if you looked up other cities and/or connections, everything was booked.”

Delta pilots also released an open letter to passengers lamenting the state of flying and explaining that the shortage of pilots has been taking a toll on the experience as a whole.

“We have been working on our days off, flying a record amount of overtime to help you get to your destination,” the letter reads. “At the current rate, by this fall, our pilots will have flown more overtime in 2022 than in the entirety of 2018 and 2019 combined, our busiest years to date.

Delta had previously warned that they would be canceling about 100 flights a day in July and August due to a lack of staffing, following in the footsteps of Alaska Airlines and JetBlue Airways which have planned to cut their flight schedules this summer.

“I was on a 6:55 a.m. flight, we were not communicated to about any delay right up until it was supposed to take off, they had us lined up and then pushed the flight to 10 a.m.,” he said. “Once we boarded, we sat on the runway for 1.5 hours and then they proceeded to tell us we would be flying west to fly east to avoid a storm surge and would prolong our short flight by an hour.”

Entrepreneur reached out the Port Authority, which runs LaGuardia Airport. They did not provide any further comment on the matter.